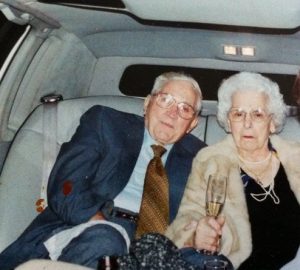 Cecil and his wife, Irma, in the limousine for my mother’s wedding.

By 1920, almost two million Italians immigrated to the United States in search of the American Dream. My great-grandfather, Cecil and his family were five of the thousands coming from Southern Italy.

To learn more about my family’s introduction to America, I went to my grandma, Tomasina Flora. She is Cecil’s oldest daughter and has always enjoyed telling all of our family’s stories. In the small Calabrian town of Falerna, Cecil’s family owned a flour mill, but they were barely making enough to survive. This was a time before a truly stable central government existed, since Italy was still a kingdom in the mid-1910’s. The majority of Cecil’s’ family and community were illiterate, so they spoke an altered dialect of the language. Nearing the end of World War I, my great-grandfather left his hometown of Falerna, Calabria in Southern Italy with his older sister and father.

He boarded a crowded and foul-smelling passenger ship headed straight for Ellis Island in New York. When they arrived at immigration, Cecil was the last of his family to get through the teeming gates. Either because of a language barrier or just a minor spelling error, the immigration officer recorded his last name as Flora rather than the original, Floro. After that day, Cecil would not go by his old Italian name because he believed “America gave me this name, and I am an American so it is now my name.” Although no one in his family wanted him to keep his inaccurate name, he never went to change that one little “a” back to an “o.”

Before they could even get settled in New York, they moved to Cleveland where they had cousins working in the mines. Cecil and his family  moved from coast to coast following the only work they could find (which happened to be mining most of the time) from Cleveland to Seattle, they would find relatives or friends to stay with before they could afford their own home. Every time they arrived at another foreign American city, they were sure to find distant relatives or a tight-knit community of other Italian Americans welcoming them. Because of this, he was not really introduced to American culture until he was much older. Cecil could barely speak English and was illiterate in both Italian and English. Even though he was constantly moving and working, he was determined to stay in school so he could someday speak perfect English. Throughout his whole life, he was resentful of his thick Italian accent and constantly strove to seamlessly assimilate into a “true American.”

When Cecil was out on his own, he met Irma, a beautiful Italian woman who would soon become his wife. She was another first generation immigrant, and shared the same values of seamlessly blending into American culture as he did.

After years of moving up and down the west coast and losing multiple coin-wash businesses with his wife and two daughters, they finally settled in Portland, Oregon where he worked as a garbage man. Soon enough, he became the owner of the garbage company and they lived a comfortable life in South East Portland. He had succeeded in achieving the stereotypical American dream of beginning with nothing and gaining a family, a home and solid job through hard work and determination. Even though Cecil had what so many came to this country in search of, he still felt it was necessary to purge his children of everything from his old life in Calabria. He forbade his daughters from learning Italian, and never spoke it in front of them. He enrolled them in public schools rather than the private Catholic schools that most Italians and other minorities attended. When my grandmother talked of wanting to visit our relatives still in Italy, he’d remark “Why would you ever want to go back there when we worked so hard just to get away and come to America?”

Although he tried so hard to completely assimilate into American culture,  one aspect of Italy that he never let go of was its food. Almost every family event revolved around the homemade food, whether it be aromatic meatballs, marinara sauce, biscotti, or freshly dried pasta, Cecil could always be seen at the head of the table with two plates full of the Italian delicacies. On the surface, this seems incredibly hypocritical of him to dispose of any Italian culture but still keep the food, but this was a common thing to do for many immigrants. He wanted to erase everything that reminded him of the struggle and poverty of his family, and Italian foods are not in any way a reminder of hard times, since they were always a luxury he could not afford when he was younger. Once he could afford it, Cecil only ever wanted the delicacies he had always dreamed of as a child.

In June of 2000, Cecil passed away, and just a few weeks before his death, he divulged to his daughters that his only regret was keeping his family from learning and keeping up their Italian. To this day, my grandmother only knows fragmented Italian phrases and random slang that she heard her elder relatives yell to each other when she was a child. Even though the majority of my family does not speak the language of our home country, homemade Italian food is still center-stage at our huge family gatherings and it connects us almost just as much as any language. The biggest of these family events being the Flora sausage parties. Around Christmas time, practically my entire family makes over 100 lbs of sausage in the overcrowded and loud basement of my aunt’s home in Portland.

After one of my family’s famous sausage parties in 2001, my grandma decided to take a month-long trip to Calabria to stay with our relatives who own a hotel in Falerna. She speaks of that tiny little town on the coast as the most beautiful place on earth. She said the most rewarding part of her trip was seeing the mill that her father’s family used to own, still standing. Every generation since Cecil has decided to invest more time learning about our ancestry and culture in Italy. This continues to bring our whole family so much closer and helps us to find what Cecil lost.

The story of Cecil Flora was written by his great-granddaughter, Angela Cummings.