Store Was Threatened by Gangs (Guatemala) 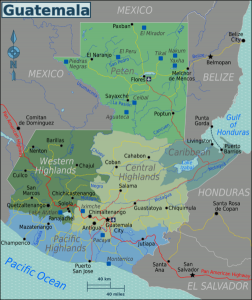 This image was created by Burmesedays and edited by Shaundd.

Valentina (name changed) was born in el Chol Baja Verapaz, Guatemala in 1984. She lived happily in that town until she was 32. She was married, had two children. She and her husband had a little store. She came to the US because of circumstances that she didn’t expect. Because the store was successful, the local gangs extorted and threatened her. They said that if she didn’t not pay they would kill her children since they knew where they studied. She knew she have to leave Guatemala. Her three brothers were living in the US. They told her to join them in California.

Her husband felt that he could take care of himself, but he sent Valentina and their children to the US. The journey took 12 days, in cars, busses, and on a plane. The scariest part of her journey was thinking that something could happen to her children. When they walking in the desert, immigration officers caught them.She ask for asylum. They spent four days in detention and then her brothers sent money for plane tickets.

When she arrived in California she was calm knowing that her children were safe. What she most misses from her country are her parents. She chose to come to the US because it is a safe country with a lot of opportunities. Here she could start a new life. She doesn’t think about returning to her country because she would be putting her life in danger.

Her plans when she arrived were to work hard for to be able to provide her children with a home and an opportunity to study, and today she continues to follow that plan. Her first job was as a waitress in a taqueria. Now she works in a hotel restaurant. The good news is the after two years, her husband is on his way to join the family.