Start to a new life (from Mexico) 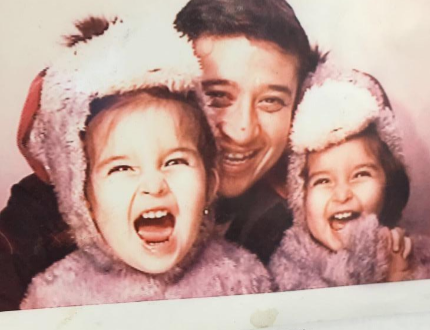 Rosendo with his twin daughters when they were toddlers.

What I had was not enough. My mom and dad couldn’t provide me with what I wanted, only what I needed. Being the oldest of three, I didn’t really have someone to help me when I was enrolled in UABC University in Mexico, which is near the border with the U.S.,I had two majors: civil engineering and architecture. My mom was an elementary school teacher and my dad I wasn’t sure about. Religion was a big thing in my home. God was who we believed in, and He was always by our side through thick and thin, no matter what happened or where or who you were.

In my school, there were a lot of rich kids with more expensive things than I had, like Chanel. My parents couldn’t provide those kinds of things for me. I didn’t finish school because I wanted my own life, to be independent, and give myself what I wanted. I asked the U.S. Embassy for a visa, but they didn’t give it to me because I had no money. I then told my parents that I was going to cross the border so that I would provide myself the lifestyle I wanted. I asked my cousin if he could help me cross, and he said he would.

To make sure we were not detected, we went to a guy and asked him if he could help us cross because he was known for helping other people. “¿Podrías ayudarnos a cruzar? “ (Could you help us cross?), “Sí, pero tendrá que pagar $ 1000“ (Yes, but you will need to pay $1000). I somehow got the money to pay for us.

The very first time we tried to walk across the border during the day, we got caught. We saw immigration around 6am and then had to run the long distance we just traveled. I remember all of us running away from the cars and helicopter, and we had to run across this river. Once we finally got out of the river, the helicopter landed right in front of us, sending all the dust on the ground in our direction. Nobody could see anything, like we were all blind, and I would hear some people screaming or crying like they were dying.

I looked around, and we were all covered in this white dust because we were wet before. We didn’t stop running, and only some people stopped. The second time I tried, we went under a freeway at 12pm, because this method was one of the “safest” ways to cross without being found. During that time, I felt frustrated because I didn’t understand why they couldn’t just give me a visa. I wasn’t a bad person, and I didn’t have a criminal record.

The first time I was on U.S. land, I was 20 but had to come back. We didn’t have papers to cross. I was afraid to cross because I might be detected, and I lost a lot of sleep because I was afraid. At this point, I really wanted my own life, so we tried again for the third time.
Before we even tried to cross again, I lost my wallet with all my money. I had no money, and I didn’t know what to do, but I wanted to cross.

My cousin and I were going to try to cross again under the freeway that led into the U.S., but this time, we wanted to be well rested. So, we stayed at a motel near the border where my cousin paid for us. Later in the night, I had a dream that someone said to me, “Cruzarás hoy “ ( You will cross today ). I woke up weirded out because I wondered why that happened, and I wanted to believe it, but after so many times I was very skeptical.

The next morning, we went to church and prayed that we would make it without any problems and got some food to eat. While we were walking, we saw some drunk kids. Being hopeless, I really had nothing to lose. So, I asked one of them if they knew how to cross. I didn’t have papers, a wallet, a visa, or money, but I wanted to cross.

One of them said ”No te preocupes, hombre, sígueme.” (Don’t worry about it, man) I followed him to some place. I wasn’t sure where he was bringing me, but I was hoping it would help me and my cousin cross. We ended up in an office with U.S. guards, along with the small group that was with us. The office had two doors on each side — one door that led to Mexico and the other door led you into the U.S. One guard asked, “Do you have papers?” I looked worried and felt the fear that I’ve felt for months skyrocket. I thought this is when I would get caught and end up in a cold, gray, lifeless room where I would have a sentence. But the guy that got us this far said, “Yes.” Then, everyone gave the same response, so I thought I should too. I said “Yes.” The U.S. guards looked at all of us with a death stare, but then said, “Ok, you’re good to go,“ then showed us to the U.S. door.

I was still scared because it was too good to be true. They didn’t ask for proof. I finally made it, I did it, I thought. Finally, after so long, we entered with no trouble. I would finally get to live the life I wanted with my friends — having fun, traveling, and having the time of my life.

My friends and I wanted to start a band, so we went to Seattle. At the time, Seattle was trendy, and we wanted to be on the music scene. Life actually got harder after that. When I first started working, I faced discrimination for being an immigrant. One time, one of my co-workers called immigration authorities on me while I was working. The policemen put my hands together in front of me, and tied my wrist together with plastic wire ties. After a couple minutes, I felt them untie the plastic wire and say, “You’re good to go; he has a permit to work.” This scared me.

I hope nobody else has to feel the way I felt. I wish everyone would respect each other, and that discrimination didn’t exist. I regret coming to the U.S. because I didn’t finish school, but I wouldn’t go back to Mexico. Now, I have an OK life. I’ve worked as a waiter at Denny’s for 18 years, see my twin daughters, and live with a tiny dog. I love the three of them with all my heart, and they’re the only family I have. I know my daughters will make it somewhere. I’m proud that they will get further in life than I have in my 48 years of living.

The story of Rosendo Rios was written after an interview by his daughter, Karen, a student near Seattle.