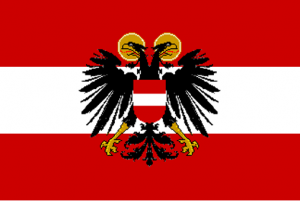 Henry Schreiber emigrated from Vienna, Austria with his family in 1939 to flee Nazi persecution. They moved to Brooklyn, New York.  Here he is interviewed by his granddaughter.

Q: What was life like for you in Austria before you left? How did this change as the Nazi regime took over?

A: I was born in Austria; I was a little boy and my family lived in an apartment. When I got old enough I would go riding in the park. I had an older brother who was 7 years older. My father had a business in downtown Vienna. We also rented a summer home in the suburbs that my father and aunt rented together. We spent two months a year there. It was a fairly normal life, I used to play in the park nearby and watch what was going on in my father’s store. My mother did the housekeeping. We also had a maid and nanny. 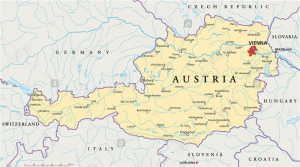 Map of present day Austria with my grandfather’s hometown, Vienna, shown in red.

And one day my parents were listening to the radio and they said that Germany was invading Austria. The chancellor of Austria came on and gave a speech, and they played the Austrian national anthem. As this was playing on the radio, German warplanes started flying overhead, and all the Austrians were happy to see them come in. They felt that the Germans would bring them a good life and good economy.

My father was a sportsman, mountaineer, hunter, and had a motorcycle. He had a lot of friends from these hobbies who wound up being Nazis. They never considered him a Jew, he was one of the boys. The Nazis remained his friends, and warned him when they would be picking up Jews in certain neighborhoods. We were made to move into another apartment. It was a 3 bedroom apartment that we shared with 2 other families. One day an army truck came to my fathers store and stole his merchandise.

There was one night called Crystal Night. The Nazis smashed all The Jewish store windows and set fires to the synagogues. Since my dad had friends who were Nazis they didn’t hurt his store. But then one day he came to work and his store had a swastika over the keyhole; it had been confiscated by the Nazis.

In 1938 I was kicked out of 1st grade because I was a Jew, and my brother was kicked out of middle school. We stayed home, and played chess. I would also play dominos with my ‘girlfriend’. I remember pushing dominos with her on the wood floor, and I got a splinter under my thumbnail, about half way up the nail. It got infected, and my parents took me to a clinic for Jews. Someone cut down each side of my thumbnail and yanked out my nail with no anesthetic, because Jews couldn’t have anesthetic. It was one of the most painful experiences of my life.

We had to move two more times, each time to a new apartment with several more families. My mother contacted an immigrant aid society to find relatives in the US. They were able to sponsor us to get to the US, and promised to support us for 5 years so we wouldn’t have to get any kind of government welfare. We got an American visa. We found out that we were supposed to leave for a concentration camp in a week.

Q: Could you describe what it was like arriving in the US, and how you were able to get here?

A: We got on a train to Italy with only what we could carry. Since the Nazis had taken all of our money our American relatives bought our steamship tickets. We went right around Christmas of 1939, when I was eight and a half.

Half way there a German submarine stopped the ship and took several people off. One’s name was Schneider, and my dad thought they were saying Schreiber. Luckily they weren’t. I’m not sure what wound up happening with the people they took.

We got to New York just after Christmas. These relatives waited on the pier in Manhattan for hours for us so they could take us somewhere we could stay the night. They were there in the cold from 7:30am until we finally got off at 4:00pm. They took us to a brownstone where a family lived in Brooklyn, NY. They found us a 1 bedroom apartment. The kitchen was about six by eight feet; it just had a sink, stove, and fridge, no counter, no table. We lived there for a number of years. The landlord was a Jewish man that charged us 25 dollars a month in rent. I went to grade school in Brooklyn. I was one of 5 white kids in a class of 43. I remember one night my mother got mugged on the way home from a PTA meeting. Then we moved to a different neighborhood in Brooklyn. We had a very small apartment there also. It was right across the street from my grade school. I wrote a poem about the flag that I could see at the top of the school. I applied for the Brooklyn technical high school, which was an elite school; you had to take an entrance exam and be in the top of your grade school class. I got in and went there for four years. After I went to Cooper Union where I met grandma in the Cooper Union hiking club.

Q: What did you think when your family revealed you would be moving?

A: I was very happy because it meant we would get away from the Nazis.

Q: Was there anything that stood out to you as being different when you first arrived here?

A: In school here they threw stuff around the room. I had never seen that before. In Austria everyone was always very quiet in class.

Q: What helped you assimilate to a new country where you did not speak the language?

A: When I got into grade school I didn’t speak the language. Luckily my teacher from the first class I went to was a Jewish lady who spoke Yiddish. It was similar enough to German that I could understand. She set it up so I could eat lunch with a German-American girl. She would help me with my English at lunch, and that’s how I learned English.

Q: Were you treated as an outsider by your peers?

A: Oh yeah. I spoke like the Nazis. They identified me as one of the Nazis in the radio programs they heard.

Q: When did they stop treating you like you didn’t belong?

A: Generally I was never bullied, no one mistreated me, I never felt like they treated me like I didn’t belong. But people could tell from my accent in English that I wasn’t born here.

Q: What cultural differences did you have to adapt to when you came to the US?

A: I don’t really know. I think my surroundings in the US were different because I was so young when I left Vienna. I didn’t play in the streets in Vienna since I was too young, but I would do that in America.

Q: At what point did that change for you?

A: As soon as I got off the ship. My name was originally Heinz. But when we got to America the guy told me that doesn’t sound American and changed my name to Henry, and that became my name.

Q: Do you think that this would have been different if you had left under different conditions?

Q: Would you say that the process of immigrating affected you and the rest of your family similarly, or did either you or your parents seem to have more trouble integrating?

A: It was more difficult for them. I picked up the language faster. When I first came to the US I did my homework after school, and then I’d help my mother make little bracelets that she’d sell so we could support ourselves. My father shoveled snow off people’s sidewalks, and my brother got a newspaper route so that we never had to go on welfare.

Q: Did your family try to continue any traditions from your childhood associated with Austria?

Q: Did you mostly speak German at home?

A: We spoke German at home pretty much until I was in my late teens.

Q: I know that both of your parents were originally from Poland, right?

A: Yes, but they had lived in Austria for a long time. My father lived in Austria beginning in 1928. He was 13  when he came from Poland. His parents had rented a farm in Poland because Jews couldn’t own land. My father was one of 8 siblings. They all immigrated to Vienna. There were lots of stores there called Schreiber that sold kitchenwares, like pots, pans, and cutlery because of all of his siblings.

Q: What was the process of becoming a citizen like?

Q: Is there anything you would have changed about the process?

A: For me it was fine the way it was.

Q: When you returned to Vienna to visit, did you feel any sense of belonging, or like it was ‘home’ in a way?

A: No. But surprisingly enough when I went in 1982, I still knew my way around the city. I remembered where everything was, as if I had never left. I just remembered one funny thing that happened when we were still in our original apartment. When the Nazis came all the buildings had Swastika flags on them, including ours. But one day the building superintendent noticed the one on our building was torn, and my mother had a sewing machine so he had my mother fix it.

This interview taught me a lot about the history of both my family and the part of the world my grandfather came from. I learned more about what conditions were like for my grandfather, and understood more about what Jewish people went through during the Holocaust and the time leading up to it. I also thought it opened my eyes a bit as to why my grandpa has the relationship he does both to his home country and our religion and ethnicity. I think so many people have very intriguing and inspiring stories of coming to America. I hope that the United States can continue to be a place where people feel they can seek refuge. I would say this exercise increased my global citizenry by giving me a better idea of what life was like in Europe during the 1930s and 40s. To me, it also supported the idea that global citizenship is important, because the country someone is from should not dictate whether or not they are afforded rights and protections.

Henry was interviewed by his granddaughter, Corina Kramer, a student at Foothill College in Los Altos, Hills, CA.