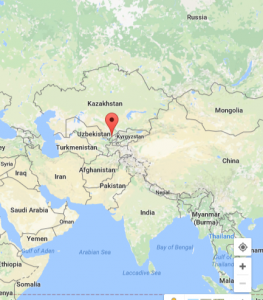 It is 1975, and Russia was known as the Soviet Union, a strong, communist country that strictly limited Russians’ rights. Vlad was born in 1971 in Tashkent, Uzbekistan, which was part of the USSR.

Vlad (name changed by request) experienced significant hearing loss at the age of 9 months due to a high fever and his parents immediately decided that listening and speaking would be what they wanted for Vlad. The Soviet Union perceived hearing loss and other disabilities as something that wasn’t important, so there were no aural schools or special education programs for Vlad, so his parents sought opportunities abroad and Israel was an option. #nbsp

Vlad was only four years old when he moved away from Russia, but he’s been told many times about  the quality of life during his childhood years in the Soviet Union. In certain areas, poverty was at the extreme level, people had no food, no shelter, absolutely nothing. Grocery stores didn’t provide a variety of food, it was very limited.  Near the capital, Moscow, the pollution could be very severe at times and it was not a safe place to live. Northern Russia experiences extreme temperatures – some of the coldest temperatures on earth. Most importantly, Vlad’s parents wanted to move closer to the capital, Moscow, but they were not allowed to do – like many people in Russia. Because of life in Russia, they decided that it was not an ideal place to live and raise a family.

In 1974, Vlad was three years old when his parents decided that it was important to move out of Russia for a better and successful life, despite the fact that they had nothing to move with.  Emigration laws were very strict. The USSR did allow Russian Jews to leave the country for Israel and that’s where Vlad’s parents saw their opportunity to get out. They told USSR’s immigration services that they were Russian Jews and that they wanted to move to Israel. The immigration services approved their request and they embarked on their journey for a better life! The Petrov family took a train from Moscow to Vienna, Austria and their flight to Israel was waiting for them. Instead, they detoured to Italy, where they could get American visas. The immigration process took a very long time, so they lived in Italy for 6 months before their visas were approved. Once approved, they moved to Detroit, Michigan.

The Petrov family lived in Detroit, Michigan for three years until Vlad transferred to a prestigious aural school program in Palo Alto, California. Vlad attended Jackson Hearing Center at Fairmeadow elementary school for 4 years until he transferred to Jane Lathrop Stanford middle school. While living in Palo Alto, Vlad’s mother obtained a job at Stanford University as a microbiologist and his father was a taxi driver in San Francisco. Vlad graduated from Gunn High School in 1990 and attended and graduated from UC Berkeley. Vlad currently resides in the Sacramento area with his wife and daughter and to this date, he is very thankful for his parents’ decision to move to America. Without their decision, Vlad would not have been a successful software engineer and he wouldn’t have met his wife.

This story is based on an interview by Samantha McBride, a student at Palo Alto High School.