From the South Pacific to Shoreview 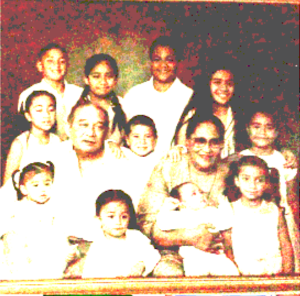 Susie with only 11 out of her many grandchildren and her husband, Siaosi Vanisi. (2004)

I was darker than most, as were my kids, and had often gone through numerous racial encounters. I had been called ‘nigger’ or ‘bum’ by people who didn’t want to hire me or even by people on the street as I walked by with my children.

I was born in Niuatoputapu, Tonga. It’s a small island and one of the northernmost islands of Tonga. No electricity, only candles. Homes were made with tree bark, leaves and wood. My small, weak house was just across the road from the beach. Every morning, I’d awake to the sound of the calm waves gently crashing against one another. My parents were very strict. I could not wear makeup, could not sleep over at friends’ house, and could not have a boyfriend. I had to go home straight from school to do chores and for dinner. My siblings spoiled me because I was the youngest and because I could always get them to do stuff for me. We’d sit under the tall palm trees and watch the sunrise just before the day started.

I was 14 when my parents sent me the main island, Tongatapu, to go to private school, St. John’s. I met a man at the age of 20, and married him as soon as he got me pregnant. I didn’t feel how one should though, I wasn’t excited or happy to be married to him. My parents had felt the same about both my marriage and pregnancy — disappointment. Because of me, the trip to America was delayed. My dad was so disappointed in me, he wanted me to start a new life, not repeat his own.

At the age of 22, I had my second child by the same man and had joined a convent to take care of the nuns. I met a man by the name of Siaosi (George) Vanisi and we fell in love instantly. He had made me feel what my actual husband had not. I stopped working at the convent, divorced my husband, and became a kindergarten teacher. After about 2 years, I had married Siaosi and settled in Nuku’alofa.

My cousin had come back from the states when I was 29 and told me her experiences there. “Everything is available to you, all you have to do is work to make money to buy everything,” she told me. I eagerly told my husband and we planned for a year our trip to America and life in it.

I was 30 years old, 5 months pregnant, and very uncertain while at the Nuku’alofa Airport with my husband. It was just us two, and I had been crying because I was leaving my family, but also because I was going to better my life and my husband’s. We flew to Fiji, then to Hawaii, and finally, arrived in San Francisco. My husband and I were picked up by my cousin from the airport and we lived with her for a year. My first job was a cashier and my husband’s was washing windows.

By this time, I had three kids with another one on the way, and we’d finally saved up to move into our own apartment in San Mateo, California. Unfortunately, my experiences were unpleasant. I was darker than most, as were my kids, and had often gone through numerous racial encounters. I had been called ‘nigger’ or ‘bum’ by people who didn’t want to hire me or even by people on the street as I walked by with my children.

I was ready to give up, but in 1977, my husband had saved enough of his paychecks to move us into a home, which I still live in today. To keep up with the bills, which I was not used to at all, I had to work 4 to 5 jobs at once. By then I had 6 children and had gradually brought all my siblings over to America. We all raised our kids in the same neighborhood — Eastside Shoreview, San Mateo — as they were siblings, also.

Today life is good. My kids have not gone to college but my oldest granddaughter is a sophomore at University of Oregon. I am so proud and my two grandkids are at Eastside College Prep. I am most proud that I came to America with a dream to bring my family. I have brought all my siblings to America and their children. I am most disappointed that I worked so hard, that my sons didn’t get very much attention and they suffered. They did whatever they wanted because I was so busy working to bring my siblings, so some went to jail and some just didn’t have strong support from me. I believe I would still be in Tonga and we might have had a long healthier life and not had problems with obesity, but I believe my grandchildren wouldn’t be getting such a great education. All of my children, nieces, nephews, and my siblings were raised as Catholics and their kids were too. The only thing that will make me proud of my decisions is if they keep three things close to their heart as they go through life — God, Family, and School.

This story was written by the immigrant’s granddaughter, Kamaile Schaumkel, a student in the Bay Area.