South Korean Moves to NYC and Succeeds as Accountant and Mother 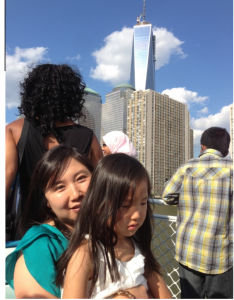 Jungha Kim immigrated from Busan, South Korea in 1995.  After many years in New York City she lives in Palo Alto with her husband and daughter.

1) How was your life in South Korea?

When I was three years old, my family moved to Japan  because of my father’s business. During that time, I went to pre-school in Japan and  learned Japanese.

When I was around five, I moved back to South Korea. My memories  were very pleasant. I lived in a wonderful family of seven including my gracious grandmother, A large portion of my day was devoted to studying: after school, my mom  would force my sisters and I to study for four hours every day. After my studies were  over, I would spend the rest of my day cooking and drawing.

2) What was the catalyst for you to decide to move to the U.S?

I had actually attended college in South Korea: it was an all women’s college. While in  college, I was in a long-term relationship with my boyfriend. Towards the end of college,  I decided to break up with my boyfriend. I resented his immature behavior and I was tired  of him. Shortly after, I decided to never see him again and I decided to move to the U.S.  Luckily, my mom hated my ex-boyfriend and encouraged me to study in the U.S.

3) Out of all the places in the U.S, why did you pick New York City?

I had gotten accepted to Baruch College for accounting. Additionally, New York City  seemed like the perfect place to explore my twenties.

4) What was the first thing you did when you immigrated?

I went sightseeing all over New York: Times Square, the twin towers, I also made sure  to eat some New York-style pizza

5) What were your early struggles with living in a new country?

Like many immigrants, I struggled with English. I had studied in Korea for a couple  years, but my english was still lacking. Additionally, I had to get used to the non-stop culture of Manhattan: everyone was working extremely hard to survive and be successful.  Ultimately, this motivated me to work harder and become the best version of myself.

My mom visited me to see how I was doing in New York. I showed her around. I was living in the Bronx in a cramped one-bedroom apartment. Rats and cockroaches were present. I would eat two meals a day to save money and all of my free time was spent on  studies or part time work. When my mom visited, she was disgusted. My life was far  from the lives portrayed on “Friends.” Before my mom left, she encouraged me to think  about going back to South Korea

7) As an Asian-American woman, did you face any discrimination and racism in the workplace and by others?

Because I’ve been blessed to live in a place as accepting and diverse as New York, I  wouldn’t say that people have actively discriminated against me based on my race or  gender. I’ve worked extremely hard for the past 20 years and I’ve progressed to  management committees.

8) What do you remember from 9/11 and how has that impacted you to this day?

I was on a bus during 9/11. Before the planes hit the twin towers, the bus driver gave all the passengers two options: to get off the bus or stay in the bus to go into Manhattan.  Since I had class, I decided to stay on the bus. As the bus was moving into the city, I  heard one huge sound. One of the towers was hit and then shortly after, the second plane  was hit. Everyone in the bus was in shock. Some people decided to get out to run away from the city and I was one of them. Luckily, I did not suffer a casualty from the incident.  Although I did not lose any friends, I found out that a lot of my friends lost close friends  and family from the attack. On that day, I learned how connected we are to the rest of the  world. Before 9/11 most people believed that terrorism was only a problem in the middle  east, but 9/11 showed how interrelated we are.

9) How do you balance being a good mother to your daughter, while also succeeding in the workplace?

Having my daughter has been one of the biggest blessings in my life. I was 35 when my  daughter was born and she’s 12 years old now. During her first five years, money was  short and I had to spend a lot of time working. My daughter, Chloe often spent more time  with her nanny than me and my husband. Fortunately, as I’ve grown older, I have adjusted my schedule so that I can be more present in my daughter’s life. Like many  women, I aspire to advance in my career and I have been able to do that. Starting as an entry-level accountant, I have advanced far in my career to become a manager. I am  blessed to have the both of two worlds

10) What advice would you give to others who plan/want to immigrate to the United States.  What do you wish that you knew?

Being a 1st-generation immigrant is challenging. Often, you’ll be scrambling to find enough money to pay for food, rent, and other necessities. As long as you are determined  to work hard and willing to adapt to the culture in the U.S, you will succeed. Additionally,  make sure to find the right friends and make good connections with others that are in the  field that you want to pursue. Mentoring and advice is extremely important and  beneficial.

11) How was your move from New York City to Palo Alto?

Moving away from New York City was a hard transition. Ultimately, I decided that it  would be better to raise my daughter in Silicon Valley and luckily my company has an office in this area and I was able to transfer to this area. This area has been amazing. My sister lives in this area and I am able to spend more time with her.

This interview was conducted by Jungha’s niece, a student at Foothill College in Los Altos, California.