Searching for a Better Life 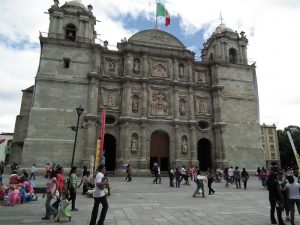 Oaxaca Mexico……. The moment I came out of my mothers stomach was the moment I had to start fending for myself. Being a female in Mexico with hispanic parents who hold old beliefs strongly, is a struggle, being told you are only good enough to have kids, make food and do all the housework. My parents never thought that I could become more than just a housewife.

Being the oldest of six children I was forced to help my father earn money.  I’m almost positive he was upset that his first born wasn’t a male… I helped my father in his job, he was a very macho man, hard headed, and strong willed. I was allowed to go to school at the age of nine but I was forced to stop in 6th grade (age 12). My teachers were sad that I couldn’t continue my studies, They always told me I was destined for good things. I tried to continue studying on my own and work but like any kid in my free time I wanted to play.

I was fifteen years old when I got pregnant of my first child. I wanted to be able to give my child the best, and raise her with a happy home. My father died a few years prior and I was blamed for his death. I was shunned from my family as well as looked down upon from my community, being an unwed mother. I wasn’t in any position to raise a child. The father of my child offered to take care of us and give us a better life; in America. I was a bit unsure of this at first. I’d never been away from my home town – apart from when I was sent to New Mexico for a time. I heard stories people told of America, they said that it offered many opportunities, and that all the food was canned. I was scared, I didn’t want to be on my own so far from my family. I know many of them blamed me for the death of my father and we weren’t on very good terms but I didn’t just want to leave it like that, and so I rejected the offer.

The father of my daughter said he would send any money he could my way to help support me raise my daughter. I thought this could work, I wasn’t naive to just rely on him to send me money; so I continued working in Mexico, carrying my child on my back. He sent money for a while and suddenly he stopped. I wondered – did he die? One of my distant relatives offered to look for him in America and see what was happening.

The father of my child was only two years older than me. When my relative found him in America, he learned that he was in fact alive and dating a female in America. Only a year had passed and I was still on bad terms with my family, so I decided to contact the father of my child and ask him to help me get to America. I did not do this because I wanted to be with him, I did this because while I was struggling to get money, he was having the time of his life. I learned a bit more about America and how they have more accessible birth control and the government wasn’t as corrupt as in Mexico. I decided that going to America would be better for my child and I.

The father of my child sent coyotes (people to sneak them over the border) to help us with our trip and I was forced to separate from my daughter. They said it would be easier if we did this. I did not feel very happy about this, I thought what if this was just his way to take my daughter and leave me here… I had to trust him though.

When my youngest daughter was five years old, I took them away from their father. He became abusive and I did not want that for them. Around five years  passed and the father of my daughters is welcomed back into their lives. I also had another daughter (with someone else). We don’t live the lavish lifestyle that I dreamed of, but It’s a lot better than what I grew up with. I am proud to say that I was able to give my daughters the best and be able to go to high school at the same time. I was on my last year to finish but things happened that prevented me from finishing.

Life now is a lot better than when I first arrived, I have three daughters all brilliant like myself (they get it from me). I have a job that provides for my daughters and I too live comfortably. I don’t see myself moving from the area I’m in now. I appreciate the friends I’ve made here and built a small community. My sisters and I have been in contact for awhile now, and I help them by sending money for them because they still live in Mexico. I do miss Mexico and I know that I’d be happier there but my daughters are used to America. Maybe once they grow up and leave me I’ll move back but for now I’ll stay here….

The interview and narrative were done by the subject’s daughter.