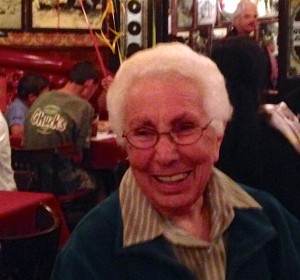 Helen Goudi was born in 1925 in the small village of Githio in the Peloponnese region of Greece. Her father died when she was three years old, leaving her mother to care for four children. After completing the fourth grade, Helen left school to support her family in any way she could. She harvested olives, babysat, and sang at events. She wanted to train to become a singer in Athens, but her mother would not let her go. Instead, she trained to be a seamstress.

In 1955, Helen travelled alone to America on a ship called Frederiki. The Greek economy was very poor at the time: World War II and the Greek Civil War had just occurred almost back-to-back, and poverty was rampant. Helen left for America looking for a better life, one where she could have a job and send money back to her mother in Greece. During the Italian occupation of her hometown during World War II, Helen, her sister, and her mother knit socks, gloves and sweaters for the Italian soldiers in exchange for food. Helen had learned to speak some Italian because of this, and once she arrived in America, she used her Italian to catch a train to Chicago. There, Helen lived with her aunt and cousins and worked as a seamstress.

In 1956, Helen met her future husband, George Goumas, at a Greek Orthodox picnic. They married in 1957, and the following year, moved to Astoria, New York. Astoria had a large Greek community and was known as one of the several “Greek Towns” on the East Coast. Here, they had their first daughter, Sotiria.Through the Greek Orthodox Church in Astoria, Helen and her husband were able to maintain their Greek culture. After a couple years, the couple moved to Salsbury, Maryland, where their son, Christos, was born. At this time, Helen couldn’t speak English, so her children spoke and wrote in Greek as their first language. They spoke to their mother in Greek and to their American-born father in English. Helen’s husband had a job with the FAA (Federal Aviation Administration) as an air traffic controller, while Helen worked as a maid in a hotel owned by George’s parents.

When Chris was four years old, the family moved to Santa Barbara, California. Here, Helen worked as a tailor in the men’s department of Sears. She later worked as a cashier at a produce market until Chris was in high school. George developed Meniere’s disease, an inner ear disorder where one has irregular hearing loss and vertigo, after working around planes for so long, and so was unable to continue working as an air traffic controller. George bought an ice cream shop as a family business; Helen worked during the day and Chris would work there after school. They ran the shop for a few years, and then sold the business.

Now ninety years old, Helen is fondly called “the Energizer bunny” by her family, inspired by her outgoing persona and her inability to keep still. The only medicine she takes is an occasional sleeping pill, and she often works two to three hours in her yard. Her family attributes this to her former lifestyle in Greece. They would harvest food in the hills and collect water every day. Of her immigration to the United States, Helen says that life is better here, but she does miss her homeland.

Helen’s story was shared by her daugher-in-law, Renee Goumas, who in turn was interviewed by Made Into America volunteer, Sana Khader, a high school student from Mountain View, CA.