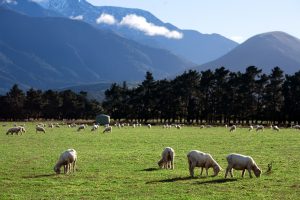 Craig was the first of his family to move from New Zealand and live in another country. He knew it was risky, but he was looking for opportunities that he couldn’t find in rural New Zealand. So he packed up all his belongings, which fit into only two suitcases, and left his friends and family behind him on a 6,500 mile journey. He headed to a post-doctorate job in the Biotech industry in California.

Craig Gibbs was born on July 25th, 1962 in Marton, New Zealand. He spent his childhood growing up in the farm town of Marton. New Zealand being a rural country with more sheep than people (6 sheep per person, according to NZ government statistics), Craig and his brother Paul spent most of their days outdoors in its famously beautiful wilderness. The brothers often went fishing with their father and helped their mother around the house and their large vegetable garden. Craig’s father managed the local paint shop, and Craig was often called to help out there. New Zealand’s separation from the global powerhouses of the USSR and the United States let the country remain almost entirely untouched by Cold War paranoia, with the side effect of a lack of development. The most modern way that Craig and his friends could entertain themselves was an outdated game of Pong that connected to their black and white television. Suffice to say, they had to be creative to find entertainment. This rural lifestyle shaped the people. It was a very simple life.

Not knowing what was ahead of him, Craig boarded a plane to America to work in the growing field of Biotechnology. His journey took close to 24 hours from beginning to end, including a 12-hour flight that had a layover in Hawaii to go through customs and immigrations at 4 in the morning. After landing at SFO, Craig was greeted by his new boss, who was nice enough to meet him at the airport. Craig’s boss drove him to his apartment in San Francisco proper. After refreshing from the long journey, Craig’s boss took him to a memorable dinner with his boss’s girlfriend.

All the while, Craig’s emotions swirled. He saw many things that day that he had never seen before. The six-lane freeway that he traveled on leaving the airport was the largest road he had ever seen. While he was eating dinner, people passed by on motorcycles while not wearing helmets. He found this strange because every other country had laws requiring helmets, and so it had never occurred to him that you could ride without one. Craig had never seen car traffic like he did in San Francisco, and everyone drove on the wrong side of the road! Lots of things were new and different to him in America. He ate sushi for the first time, which had not yet made it to New Zealand despite the country’s obsession with fish.

Craig had little difficulty with the American social climate. Despite being in the latter years of the Cold War, Craig was a skilled scientist who emigrated from an English-speaking country, which had sided with the Allies in WWII. He was well-respected by most people, and he was rather surprised at the pride that Americans took in their own immigrant heritage. He was also surprised at the reverence with which Americans treated science and scientists. Craig found it much easier to make friends than he had assumed it would be, but he still ran into some challenges outside of his roommates and co-workers. The people he met were generally nice, polite, and helpful.

Craig had left his home only once before when he was 23 years old. It was then when he moved to Glasgow, Scotland, to get a greater education than he could have in New Zealand. He received a PhD in Molecular Biology from the University of Glasgow in 1988. With his new qualifications, he was soon offered a job in Research & Development for Genentech, a biotechnology corporation in South San Francisco. Genentech had recently developed a method to produce biosynthetic ‘human’ insulin from Escherichia coli bacteria.

After completing his Postdoctoral studies at Genentech, Craig took another risk and went to work at what was then a small biotech company, Gilead Sciences, as a scientist in the Biology Lab. Craig was one of the first 100 employees at Gilead, which now has almost 8,000 full-time employees. Gilead Sciences is a biopharmaceutical company that specializes in antiviral drugs used in the treatment of HIV, Hepatitis B, Hepatitis C, and Influenza (the flu) and supplies them to people all over the world.

After a few years at Gilead, he found himself in a succession of different roles in the company and decided to attend college again to get a Masters in Business Administration at Golden Gate University. Craig’s choice to join Gilead Sciences was fortuitous timing as it soon experienced a period of unprecedented growth. The company launched the Hepatitis C drugs, Harvoni and Sovaldi, both of which were extreme successes, making a total of $19 billion dollars in 2015. After 20 years at Gilead, and in his final role of Vice President of Corporate Development at Gilead Sciences, Craig was ready to move on. His dream was to work for another small biotech. Craig soon got a job as Chief Business Officer at a new biotech startup called Forty Seven Inc, where he works today. Forty Seven is currently in drug trials for a new immunotherapy drug that has the potential to cure all forms of cancer.

Craig’s successes in America extend even further, as he met the woman who is now his wife of 23 years, Kit Fouts. They met as roommates in San Francisco six months after Craig’s arrival in the US. Kit had a Bachelor’s from UC Davis and was working in fashion design and advertising, but still hadn’t found her passion. She later enrolled in the California Academy of Arts, more specifically, their School for Architecture in San Francisco. Kit, now Kit Gibbs, received a Bachelor’s in Architecture in 1997. Craig worked at Gilead and Kit worked as an architect for a few years before she gave birth to her first child, a boy named Liam, in the year 2000. Two years later, they had another child, this time a girl named Amelia. Kit eventually retired from architecture to be at home with her children, but Craig kept working at Gilead. Craig and Kit moved their family to Palo Alto in 2004 to take advantage of the quality education and warmer climate than San Francisco there. Their children are now both students at Paly. Liam is a junior and Amelia is a freshman, and they both show promise in their futures. Craig still has close connections with his friends and family in New Zealand and visits them every year with his US family at Christmas time.

Craig Gibbs is the first and only person in his family to move outside of New Zealand and become a permanent resident of another country. Despite having to leave his friends, family and country behind, he found success and has had a hand in shaping the field of biotechnology in the United States. He has also made a better life for himself, so he’s glad that he took the risk to move away from the comforts of his home and emigrate to the United States. Craig found his American Dream.

This story was written by Craig’s son, Liam Gibbs, a student at Palo Alto High School.