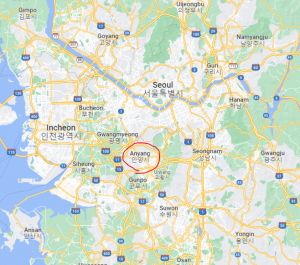 My mother comes from the city circled in red-Anyang – not far from the capital, Seoul.

My life centered around my role as a mother of two children, and a secondary science teacher at public middle schools. I taught over 11 yrs.

When and why did you decide to leave?

After I earned my master’s degree in 2013, I was debating between whether to further my doctoral program in Korea or abroad. I wanted to give a groundbreaking change to my life. To myself who married way early, I desperately wanted to reclaim my own self and expand my identity. And, I thought the degree program for some years could be a good leverage that can help me make the change to come.

What was it like when you first arrived in America?

The first day I landed in the US was August 15, 2016 at Detroit airport. I was accepted to the doctoral program at Michigan State University. To get there, I took a ‘Michigan Flyer’, a big express-way bus. That day was vivid as I left my family – my husband and two loving sons behind me, and was literally alone. I was clearer than ever not to get in trouble.

Once I arrived at MSU campus, every day was full of challenges from small to big tasks. Across the tasks, communicating in English was a hurdle much more than I expected. I expected that it would not be easy, but all the English education/preparation that I had received in Korea by then felt useless at that time (although this wasn’t true).

The lack of confidence in English, and legal buoyancy as an international F1 student VISA holder gave me a sense of solitude. There were many days I wasn’t able to jump into in-class conversations or small talk. And, small talk is still challenging.

Still I had important ‘missions’ I had to make, including finding a house to live with my sons who would join in the following semester, and buying cars, creating bank accounts, finding schools my sons would attend if they arrive,  and more.

As a doctoral student, I worked as a research assistant and was paid biweekly. The payment was valuable but only allowed me to make ends meet. Still, I was grateful because research assistantship was how I was able to finally settle in the new life by locating my role and space and developing scholarly identity.

Did you feel welcomed in America?

I would say yes and no. My impression is that there have been 50 percent or more people who welcomed and tried to understand me and include me into their communities, while 50 percent or less were indifferent or disinterested in engaging with me.

I would like to focus on those who welcomed me, helped me live well and succeed in and achieve. Without their support, my family and I cannot be here. I also will advocate for those who are in need of such support.

I am still puzzled with what it means by being ‘welcomed’. Who defines the term may draw on different answers. Also, how I perceive and make up my mind seems to affect the impression of being welcomed or not.

Still, I do not feel that I am fully a member of this country where I have lived in for six years and probably it won’t be possible for good. However, in my workplace, I am finding my own place and role. I think this is important as I am developing the meaning of my being here. Also, how can you expect that you are welcomed and feel belonged in less than ten years? I may need more time. And, over the years, I may find my community in which I will feel welcomed and belonged.

How was the reality different from the perception of America?

The major perception disrupted was about America being a country that values and exercises equality regardless of races and nationalities. To me the racial discrimination was really abstract when I was in Korea. I heard about racism and white supremacy, but it felt like residing in the past. When I was in the US, it was not difficult to observe explicit or subtle instances that suggest micro-aggression or racist discourse. It was a surprise to a new-comer that it was inside of daily life and even in my own perspective that I had developed over my life.

For example, as a science teacher, I did not notice the whiteness historicized in science and scientists before I came to the US. But, my doctoral studies and life as an international and a woman of Color facilitated me to experience myself and be able to see the micro-aggression and racist discourse/nuance that operates at different dimensions of my life not only in the US but also in Korea. (For example, some Koreans have blind ‘Americanism’ and want to educate their children in the US without clearly knowing what it would look like. I wasn’t not free from American exceptionalism; this was underneath my drive to come to the US for my doctoral program primarily and for my sons’ education secondarily.

Despite the disturbing reality of racism I observed and experienced, I acknowledge that I was lucky that I was able to complete my doctoral program and continue my scholarly life as an assistant professor. In comparison, if I were an international doctoral student in Korea, this kind of promotion would have been hardly available.

Today, the US to me is a place of hope, despite the disturbing reality.

Do you see yourself in a better position here than back there?

I think so, not because I earn more money, but because I have learned about myself, striving to survive and thrive. I have been physically and mentally healthy overall. I am grateful that I was able to live with my children with no significantly bad accidents.

If you were to go back in time, would you still come to America?

Yes I would. But, if I were to go back, I may come with my husband and family all together.

Have your core values and perspectives changed overtime in America?

The core value of my life was ‘excellence’ and ‘effectiveness’, which was, to me, normal to survive in Korea, the country known to be highly competitive. I still value them as a part of my work attitude, but I have developed perspectives on the importance of equity and justice, which has helped me complicate my understanding of excellence and effectiveness.

What do you plan to do in the future?

For the next five years, I will keep researching and teaching at Santa Clara University. Afterward, I may have different opportunities or continue staying here.

What do you want to say to other immigrants, or your younger self in the past?

Advocate your presence and goals. Do not minimize or ignore your feelings, wondering, and concerns. They are all legitimate to ‘name’ and address. Seek for solidarity of those who support you and also support others who seek community. Find where you can easily connect with others, as a place to help you feel belonged. Still, don’t be blind to or fantasize about your experiences and be prepared for emergencies and unexpected accidents, whatever they might be.

The interview and write-up were done by Junhwan Ahn, the daughter of Won Jung Kim – who is the subject.  Junhwan is a student at a Bay Area college.