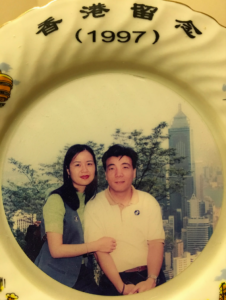 Picture taken during my parents’ first time in Hong Kong city. The caption on top of the picture reads “Hong Kong City View.” Interestingly, this is the same year that Hong Kong was integrated back into China.

I remember one day coming home with soot and dust covering the shoulders of my coat from the pollution.

My son once asked me, “Why did you leave China with such a good job to come to America? You work much harder here than back in China.” In China, I was considered upper class. I had a high income, lived lavishly, and was surrounded by family and friends. So, why did I leave all of this? My name is Anna, and this is my immigration story.

Growing up in China, specifically Hong Kong, my parents were not heavily rich, considering they were lower-middle class. We lived in an apartment building alongside several other tenants. We would collectively crowd around our only television during dinner to watch a ppshow, or the news that was being broadcasted at the time. However, despite the lack of income, they worked very hard to put me and my siblings through school. Once graduated, I attended a community college, but later dropped out to join the workforce.

I first started working as a waitress in a big, high-end hotel. Here, I made friends with administration and others high up in the social hierarchy of the restaurant. It is also here that I met my husband, Will, who was an accountant for the golf course at a nearby hotel during that time. We would often go on dates at various luxurious restaurants in the area.

As my life progressed, so did our relationship. I slowly moved up the ranks at the restaurant, and ended up becoming the manager. I soon got married to Will.

Despite living in such good conditions, China’s were getting worse. I remember one day coming home with soot and dust covering the shoulders of my coat from the pollution. In fact, the pollution got so bad that we ended up having to wear masks to filter out the particles. Wanting to start a family, we decided that this type of environment was not ideal for raising our children, so we decided to move to America.

The decision was hard to come by. We both considered staying in China for a little longer to save up more money. Additionally, we’d be leaving behind a lot of family and friends, who we’ve known for a long time. Leaving this closely knit community was a hard decision for us, but in the end the benefits of raising kids in America outweighed the benefits of staying in China.

The move itself had no issues. In order to prepare for the move, we first had to accumulate money. We saved up our wages for a little over a year. Once we had enough money, we bought two one-way plane tickets to San Francisco International Airport. We brought everything that we could stuff into our suitcases. We decided to move to San Francisco, where my in-laws, Will’s parents were staying. We lived in a two-story house and shared the lower floor with Will’s brother. However, integration into American society was by far the hardest thing I’ve ever done.

For starters, neither of us knew any English, as we were “fresh off the boat.” We ended up attending a school for adults to learn English as a second language. The lack of proficiency in English also hindered our chances at getting a good job. On top of that, our degrees that were obtained in China mattered very little in America, as climbing the social ladder back home was based off of the relationships you had, whilst here it was merit-based. We were both unaccustomed to this, and ended up learning from Will’s father, who was a sushi chef at the time. Will soon got a job in a sushi bar at a grocery store in Palo Alto, and I soon joined him there. However, this posed a few problems. We would often wake up early in the morning and come back late at night, due to the work hours and the commute. Although the pay wasn’t good, it was the only thing we had. As we continued working, I soon became pregnant with my son. My mother-in-law took care of him throughout preschool. However, when my daughter was born, we had to rethink our living situation.

In Palo Alto, we purchased an apartment which was right across the street from the grocery store which we worked at. Palo Alto was a relatively small town compared to San Francisco, so schools were much closer to each other. Here, we could focus on not only working, but also on developing our family. Although Palo Alto is very expensive to live in, we decided that it was worth the risk, so that our children could have a proper education. However, to make more money to sustain living in Palo Alto, my husband took up a second job.

From living lavish lifestyles and working as a white collared worker in China, to working 12+ hours in a supermarket, I’ve experienced it all. Some of you may wonder, ‘why I left such a good job and life in China to come to work for minimum wage at outrageous hours in America?’ The reason is simple. I wanted a better life for my family. I wanted my children to have opportunities which I did not have growing up. I want them to attend a four year college, which my husband and I didn’t get the chance to. I want them to have a successful job, and to have a happy family. In order to give my children the chance to be what I could not, I will sacrifice anything for them.

This story was written by the immigrant’s son, a student in Palo Alto.