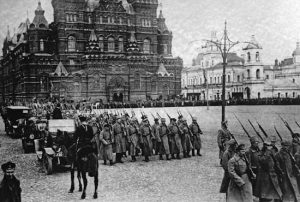 Screaming filled the streets, as communist soldiers pushed down innocent civilians. Above the chaos was a vast dark sky that stretched high over the rolling mountain ranges of Russia. The country was distraught, Tsar Nicholas II had just lost his power and revolutions had begun. Not a single person was safe from the aggressive soldiers of the Communist Party. Twenty eight year old, Paul Simko, stood in his window and watched as his town slowly fell apart. He knew he couldn’t stay there much longer. Mr. Simko had never seen such aggression and anger in his lifetime. In fact, as a young man he was raised by monks. The monks taught him to love, cherish and heal. Healing would later become his passion. He was shocked by the amount of revolts and violence the Communists displayed and he prayed for it to stop.

On a brisk morning in 1918, Paul awoke to his daughter Mary tugging on his sleeve, “Daddy, there are loud sounds outside”, she said as she looked up at him in fear. Mr Simko smiled at his little girl and replied “Don’t worry sweetie, they won’t hurt you.”  He then closed his eyes and began to think about his wife, who he had fallen in love with in Ukraine and his three year old daughter whom he adored. He knew that this was not the life he wanted for his family and wondered how he could change it for the better. The next morning, Paul talked with his wife Marie. He told her that his dream was to go to America and start over. Her eyes widened as she nodded in agreement, yet she did not say a word.

Two days later he left the house, his wife and his daughter. Mr. Simko demanded to travel alone, saying he had to in order to be as “successful” as he could. All he carried was a decent amount of money and some paperwork to prove his ownership to property in Russia. His land in Russia was given to him by the monks who raised him and it was of great value to him. Paul Simko soon found himself on a large charter ship headed to Ellis island. He could barely move as he stood in crowds of people who shared his need to flee Russia. He heard a loud cry when he first boarded the boat and glanced to the left, and saw a young mother holding her newborn baby in a soft blanket. Oh, how Paul missed his baby Mary, but all he could do was remind himself that he was doing this for her and he would see her soon enough.

The journey took seven days, but Paul finally arrived in Ellis Island, New York. He instantly took action and got a job in the refining industry. His company was known as ASNR or the American Smelting and Refining Company. It was located In Carteret, New Jersey. These earning were enough to provide him with a small house and money for food. Although this job was fairly useful in America, it was not his passion. He was a healer.

Two years passed and Mr. Simko didn’t hear from his family. He didn’t know how to contact them, but he knew that Marie was smart enough to make it to America. He had left behind some money for her journey and told her to wait a while before coming. Marie was successful, she arrived in America in 1920 and alongside her was Mary. The family was reunited, and lived in a small cottage. Their house was located in the suburbs of New Jersey, and as Paul Simko had slowly learned english, he was able to communicate with his neighbors and make new friends. He became known down the block as “The kind Russian who will heal you.” He lived up to his name. As busy as he was working for ASNR, he made time to practice healing on people of all kinds.

Sadly, healing was his downfall. Paul Simko was arrested multiple times for practicing medicine without his official license. In and out of jail, Paul was struggling and losing his passion to heal because of the burden it put on him and his family. Through this, Marie and Paul expanded their family and had a total of 5 children. The family faced extreme hardships. Marie Simko suffered from major health problems. She had a thyroid infection that quickly lead to pneumonia, She died very young after giving birth to her last child Helen. The medical advances were lacking in the 1900s, so there was nothing the doctors could do to save her.

Paul lived a hard but simple life in New Jersey. He was left to raise his 5 kids and teach them how to speak English. Paul forced them to only speak English at the dinner table, and they caught on fairly quickly. Even through these hardships, he stayed strong. Paul Simko was a humble, peaceful and loving man who changed the lives of many. He proved his strength and bravery by coming to America and maintaining the life he wanted for his children. He will forever be an heroic pioneer in our family.

The story of Paul Simko was written by his great-great-granddaughter, Makenna DeGeronimo, a student at Palo Alto High School.