Running Towards the Future (Egypt) 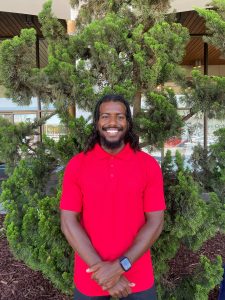 Abdelkareem Khogali is originally from the outskirts of Cairo, Egypt where he lived with his mother and younger sister until 2017. He grew up in an apartment residing in a compound with a tightknit community and went to school with the same children all throughout elementary and high school. It would have been difficult for him to pursue higher education to become a civil engineer in Egypt due to costs and university’s high admission standards. Private tutoring lessons can be quite expensive, and they are necessary to get a high score on final examinations for college admissions. His mother wanted Abdelkareem and his sister to have a better education, so they all moved to San Jose, California in 2017.

“My vision of the U.S. was all from the movies I watched. So, I expected to see a lot of white people, tall buildings, locker-rooms, and everything changed my first day of school,” said Khogali. One of his struggles was getting used to the continuous use of the English language and his heavy accent. To improve his English skills, he practiced by talking to himself and singing along to songs with English lyrics. Mr. Khogali started his junior year of high school at Mount Pleasant and that is where he was introduced to what would be one of his strongest passions going forward, track and field. Back home he had played soccer and raced with his friends for fun, but he quickly became interested in track and field after one of his friends introduced him to it and he joined his high school team. Khogali continued to be a student athlete at De Anza College due to its well-known track program, even though it was a 40-minute commute from his home. He later became the captain of the men’s team. At De Anza he also became a part of the Student Athlete Association Committee where he participated in the discussion of funding and helped change the previous De Anza Don mascot that was considered offensive, to the current De Anza Mountain Lion. His academic and athletic involvement helped him become the recipient of the 2020 Sankofa Award at De Anza College selected by the Black Faculty, Staff and Administrators Network (BFSA) along with a scholarship.

Currently, Mr. Khogali is a student athlete at San Jose State University on his path to graduate with his bachelor’s degree in civil engineering in Spring 2023. He holds an internship with the Valley Transportation Authority and is working as a security guard. Although he is a busy individual well-adjusted to his life in Santa Clara County, he still makes time to preserve his culture through the practice of the Arabic language and Muslim traditions and holidays like Ramadan and Eid. “I like to be the person that people say, “I want to be more like him””, said Khogali, who is above all a humble individual. Yet, he is anything but ordinary. He perseveres in life with the words his high school coach told him, “Be your own Kareem”, and continues to do the best he can, leaving his individual mark everywhere he goes.

The interview and narrative were done by Britany Gutierrez .