A Rugby Player from Tonga 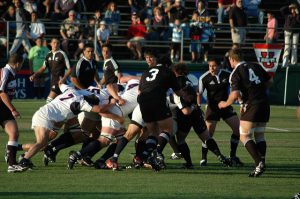 My dad, Moses Tameilau, was born and raised in Niua, Tonga. He is 52 years old and now lives in Redwood City, Ca with an amazing wife and six kids. He owns a little business in concrete contracting and works for the government in the city of Los Gatos. He has a strong passion for the game of rugby and a love for his family. I chose to write about my dad not only to learn and grow closer to him as a daughter, but also to get an understanding of the struggle immigrants go through in order to make a living here in the U.S.

My dad grew up on the island of Tonga – in Niua – and lived there until he was 22 years old. He went to Liahona high school and was a dorm student. He dormed all four years of high school and learned to be independent at a young age.  He grew up playing and loving rugby and because of his passion for the game that became his ticket out of Tonga and into America. When my dad came to Oahu, Hawaii in 1982 he had to leave his family. He was sad to have to leave his family behind, but he was anxious to live a life of opportunity and adventure on his own. He went to Hawaii for a rugby tournament playing with the All Blues Berkeley team at first, but eventually stayed there for 5 years and took advantage of the opportunities he received. When he first set foot in Hawaii, he was amazed. He claimed it to have been “one of the most breathtaking moments in [his] life”. He was shocked because he thought that since Tonga is an island and Hawaii is an island that they would be the same, but he was very wrong.

After the tournament and the long yet enjoyable days he stayed with one of his teammate’s family for about three months but then moved in with his own family that lived in Oahu. He struggled the first couple of months because he didn’t know any English, he didn’t go to school and he was struggling trying to extend his visa. He had to pick up the language fast by listening and conversing with his teammates and his friend’s family helped him to go to school and extend his visa for six more months. He was very grateful for his friend’s family and said that they “took care of [him] as if [he] was their own”. With the help of that family he was able to attend school at Brigham Young University (BYU) – which has an extension in Hawaii – and get his first  job as a tour guide in the Polynesian Culture Center. He went to BYU and got help to apply to schools on the mainland of America. He would work after school at the Polynesian Center everyday. Everything was going extremely well for him, he had a job and was earning money to send back to his family and he even got accepted to a school on the mainland.

One day, a man at his school was being disrespectful to one of the village chiefs and was known to have a disrespectful past with women, and my dad was fed up with him and his actions. So my dad felt the need to “teach him a lesson” and beat him up at school.  At the moment my dad thought he was doing the right thing and was “putting him in check”, but because of his foolish act he got kicked out of school and was going to be deported back to Tonga. Knowing this, he hid away with some friends that he had made while being there, jumping from house to house for about 2 weeks and then finally got a ticket to run away to the mainland of America.

There was a bad feeling in the pit of his stomach on what felt to be a life-long plane ride to California. He sat there on the plane nervous that he might have to be sent back to Tonga, but once he set foot on California soil he felt safe and was amazed. He thought Hawaii was big, but once he got to California his mind and view of the world became so much bigger. He saw so much opportunity in life that he could never have seen or felt in Tonga. He felt that “[his] view of the world became so much bigger. The impossible became possible in an instant. He came to San Bruno, California and stayed with his mother’s family until he could find a job. After getting settled, he would go with his cousin to do yard work and construction until about a week later he found his first job as a truck driver. He delivered Miller Beer all the way from San Bruno to Sacramento. For three years, my dad had to get up at four AM and take a bus to Daly City, from there he would catch the five o’clock train and get off in Oakland. In Oakland, he would take a bus to a stop close to his work and from the bus stop he would walk. He had to go through sleepless nights and would go days without eating, but what motivated him to get through these struggles was his family and wanting to “better himself” and “live a better life than [his] parents”.

My dad bought his first studio and his own car after three years of being in the U.S and continued to work as a truck driver delivering office supplies for ten more years. Soon after he found a job in construction and started a family and settled down in Redwood City. Since then he has developed a family of his own and has made a living in construction and is also a coach for rugby. The rugby team – the Peninsula Green Beavers – has been nationally ranked almost every year.

This story was based on an interview by Mina, the daughter of Moses. She is a student at Eastside College Prep in East Palo Alto, CA.