Risk and Hard Work Pays Off 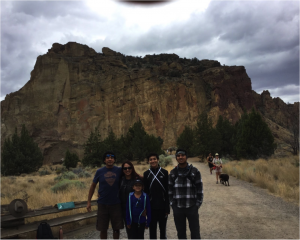 First vacation out of state to Oregon with my family

My father is Arturo Calvario and he was born on January 2, 1967 in Guadalajara Jalisco, Mexico. The following is from his memories in his point of view on his journey to the U.S and where he is now:

The city I lived in, while in Mexico was a beautiful city and I loved it very much along with my family still there. I was 23 when I left and I was the only one of my family to leave to look for better job opportunities and to improve myself as a person. In Mexico after high school, it was very hard to find a job that will help me or my family. I took a bus from Guadalajara to Tijuana and from there walked through the desert and crossed the border illegally. I was really scared because I didn’t know what would happen and I thought I wouldn’t make it across. The main reason I made it across was that I didn’t want to die in a desert all alone and just be forgotten.

Starting my life in the U.S was scary because the coyotes that got me through the border wanted me to pay them $300 dollars but all I had was $100 so I gave them the $100 and someone else agreed to pay the other $200. The guy never paid the rest of the money so the smugglers kidnapped me and kept me in a garage in Santa Ana for about 3 weeks not knowing what they wanted to do with me, I offered work but they just wanted the money. One day which I guess was a holiday, there was about 30 other people in the garage and only 2 people watching us and and they became so drunk that they passed out. Me and a group of 3 brothers decided to break the locks of the garage and they called someone to pick them up. I begged them to take me somewhere because I had no idea where I was so the oldest one said that they’ll take me to LA but that’s where they’ll leave me and I’ll be on my own.

It has been a long journey in getting to where I am right now. I started as a dishwasher in L.A for about 6 months until I moved to Pasadena and became a dishwasher again but met a person that changed my life. Florentino Cantero took me in as an apprentice to learn to paint houses and introduced the business to me. He let me live in his R.V in his backyard without making me pay rent because I had nowhere else to live. Once I started making money in jobs I gave him some version of rent because I was grateful for everything he did for me. A time came when I had to leave Tino and Pasadena because the owner of the paint company was exploiting his workers. He only paid us $30 per day and we worked from 5am to 9pm. I left to the bay area because I needed to find something better for me.

The bay area was bad and good to me with time. When I arrived there I only had about $50 and I was all alone again. For months I would go to 5th Avenue and be a Jornalero (someone that let others pick them up for work) and would eat at St. Anthony’s because they provided food for those who needed it. I was the most homesick here because I was all alone again and for a while I just wanted to save money for a ticket back to Mexico to be with my family. Later I had to face the fact that I was stuck in the US and had to make a life for myself here. The good came when in June in 1992, I got my first real job as a gardener for Ross Rosenblend (The last name was close to this). I was paid $5 the hour and worked for 3 days of the week. While working for him I met one of the first people in the painting business and his name was Dave Dennes. He taught me everything on lead painting and lots more than what I learned from Tino. He offered me work for $8 per hour and when I told Ross about it he said he can’t match that but he wanted me to go work for him because it would be better for me. When I left Ross he gave me $100 because he was grateful for all of the hard work that I did for him.

As I began to stabilize my life in the U.S , Dave signed me up for English classes at a High School and I finished the classes for a little at a community college where I met my future wife, Sandra. As years went by I grew distant from old friends like Dave as I worked to create my own painting business. My life now is something I appreciate dearly because I have two sons and a lovely daughter. I have had chances to send my two boys to Mexico to meet their family and they loved being there with them. Although it was a scary and difficult journey here in the U.S, I am glad I came because I have the life I dreamed of with all its new opportunities.

Arturo was interviewed by his son, Emiliano Calvario-Diaz, who is a student at Eastside College Prep in East Palo Alto, CA.