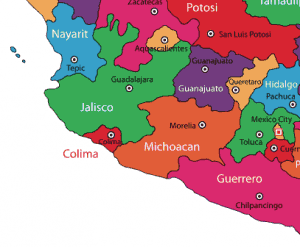 I grew up in a small town in my parents’ red brick home with my siblings. Our house was surrounded by mango trees and some land. Growing up, I would play outside in the hot sun with the neighborhood kids. In the mornings me and my brother would work and make tostadas outside. After that, I would go to school. I even sold fruit with my brother. I remember the delicious street food sold in my town. My parents moved to the United States and left me and my siblings for a while before we immigrated there ourselves. Me and my siblings took care of each other, and my oldest sister took care of all of us. Our town was never safe, and after the death of my brother, and our house getting shot at, my parents were rushing to get me and my siblings to the United States to live with them.

I immigrated to the United States from Michoacan in September of 1996 at 12 years old. I was happy that I was moving to the United States because my parents were there and I didn’t feel safe in Mexico. I came to the United States through the Tijuana border. I was in a car with my sister and I remember being nervous. Crossing the border I was so nervous and I remember shaking so hard that the officer even had to ask me why I was shaking and I had to say that I was just cold. The officers asked us where we were coming back from and where we were headed. Other than that there were no further questions asked and me and my sisters made it safely across the border.

After crossing the border into California, me and my family stayed with my mom’s cousin in East Palo Alto for a couple of months until my dad was able to rent an apartment for all of us. The most difficult things for me to adjust to after moving here were the language, and the environment or way of living. It was really hard for me to communicate with people and it was just not the same as living in Mexico. This is also the first time I ever really experienced different cultures and races, it was totally different from Mexico.

I liked California after a while of living here. It was different. In Mexico I was afraid to go out in the streets because it was dangerous. Since I didn’t know the language, I made friends with other Mexicans because we could understand each other. I was in ESL classes in middle school through college. I graduated from high school in 2003 and went to Canada college from 2003-2006 but then stopped when I got pregnant.

I feel like in college and when I was working is when I started to really pick up English. I started working when I was 15 because I wanted to buy my own things that my parents couldn’t afford. I worked so I could buy myself whatever I wanted. It was not that hard to get my first job. I had to get a fake social security and a fake work permit. I went to people that sold them illegally and paid them for it. I was scared of getting caught and getting fired because I was working with a fake work permit. After 9/11 I got fired from my first job because of my papers, but thankfully I was able to get a job after that right away. I was still living in constant fear of being caught and fired from my job because of my documentation.

I now have a work permit through DACA. I got my work permit around 2012-2013. I felt safer because I was able to get a license. I was driving without a license for so long so when I finally got my license I didn’t need to be scared of being pulled over and getting my car taken away from me. I am still an immigrant but with DACA I am allowed to work here.

I’ve been in the process of getting my documents through my brother for the past 20 years since 2001. It’s a long process so I’m just waiting. Overall I am very grateful for my experience and I know that I am living a better life here in America than if I stayed in Mexico.

The interview and narrative were done by her son, a high school student in the Bay Area.