Journey to Safety and Freedom 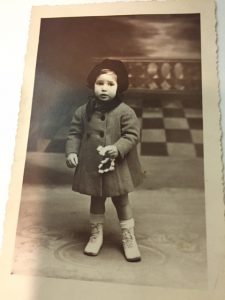 Evelyn Loeb Beilenson immigrated to the United States in 1941 during World War II. She came on a ship from Lisbon, Portugal as a three-year-old to New York City, but her family was originally from Mutterstadt, a small agricultural town in the Rhineland-Palatinate region in Southwest Germany.

Although her Jewish family had roots in Germany dating to at least the 16th Century, Evelyn’s father Morris Loeb moved with his wife Johanna to Paris, France in 1934. In the import-export business, Morris had understood that Nazi Germany was no longer a welcoming place for Jewish people. Evelyn was born a few years later in Paris, and the family lived near to the Eiffel Tower.

In 1940, when the country fell dramatically and quickly to the advancing Nazi troops, France was no longer a welcoming place for Jews either. In fact, just before France was defeated, the authorities began sending German Jews to various detainment centers. Morris and his brother-in-law Solly were shipped to a holding camp in Bordeaux. They were let out when the Germans marched into Paris. By that time, Evelyn and Johanna had been sent to a camp for women in Gurs, in the south of France. Evelyn says she remembers relatively little of her time there, save that it was muddy between the barracks. 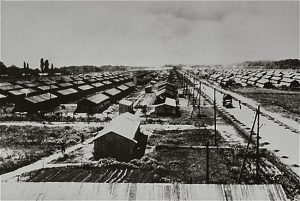 Though with no direct communication, Morris had heard a rumor that his wife and daughter had been sent to Gurs. Traveling on foot by night, he and Solly made their way to the camp, about 135 miles away, and found them. As Evelyn was a French citizen, Morris was able to arrange for her and her mother’s freedom. Reunited, the family found a temporary place to stay in Lucq de Béarn, about 15 miles away.

Shortly thereafter, Morris got word that a large group of Jews from Rhineland-Palatinate had also been sent to Gurs. He traveled back there, connected with a local baker, and arranged to get into the camp in the back of the baker’s truck. In the women’s barracks he found his mother and mother-in-law, and in the men’s barracks his older brother Otto and several people he knew from his home town. Given his mother and mother-in-law’s age, he was able to convince (perhaps pay off) the authorities to let the older women out. However, he couldn’t secure passage for his brother, and Otto was eventually sent to Poland and killed at Auschwitz.

The three-year old Evelyn, along with her father, mother and maternal grandmother, however, had a path out. In the weeks that followed, Morris traveled to Marseilles several times and was first able to secure visas to Argentina and Cuba. Later, he was able to arrange visas to the United States. The four then traveled by train to Madrid and ultimately to Portugal, where they boarded a ship in Lisbon, bound for the US.

They landed in Hoboken, NJ, and the Loeb family settled on the Upper West Side of New York City, among a growing number of German Jewish refugees. While other family members worked as domestics or in service jobs, Morris ultimately started a successful manufacturing business, aptly named Liberty Hardware, its logo an image of the Statue of Liberty.

Evelyn entered public school in New York City, learning English in class, while German and French were still spoken at home. Ultimately, she earned entry into Oberlin College, where she graduated in 1959. She married Nick Beilenson soon after and became a school teacher in Massachusetts and New York and had two sons and a daughter. Ultimately, like her father, Evelyn sought to apply her talents to business, starting an interior design firm, KB Interiors, in the 1970s. In 1983 she joined Peter Pauper Press, a book publishing business that Nick’s parents had started several decades earlier. She served as owner and co-publisher of Peter Pauper Press with Nick for almost three decades, building it into a thriving business. Today, her son, Larry, continues to run and grow Peter Pauper.

More than 70 years later, Evelyn remains grateful for the freedom, opportunity, and most importantly the security afforded to her family in the United States. She notes that she was fortunate, as “many of the boats headed for the US and even Israel” with Jewish immigrants were turned back. Today, she feels strongly that the US should continue to provide a place for those fleeing violence and persecution. She notes: “We have all been refugees at one time or another.”

Evelyn was interviewed by her son, John Beilenson, who submitted this account.