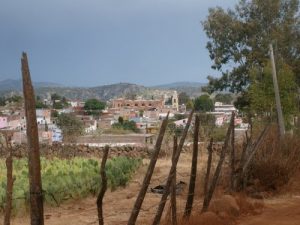 My favorite place in the world….

I grew up in La Mesa de la Providencia Tlachichila Nochistlán, Zacatecas, México. I remember that it was a small town, where a small amount of people lived and everyone there was mostly family. For me that is the most beautiful place in this world and the best place to live. It was so small that everyone would know everyone, you wouldn’t walk around and see a person and not say “hi.”  It was the right thing to do. We were all there for each other and had fun.

My childhood was happy and fun, my siblings and I would go to puddles of mud and the lagoon to play fight in the water and throw each other around; I also was a bit of a player when I was young. When I was 14 years old, I was with 5 guys at once, I had 5 different names with each. One day, all five were at my house waiting outside the door, I thought I was going to die, so I told my Aunt to tell them that the “five girls,” who were all me weren’t there. I didn’t date for a long time after that experience.

Even though it was fun, it was a little sad because I was not raised with my parents, but instead with my grandparents and aunts. Even though this happened I had better luck than my siblings since they sometimes lacked food or clothing since there were eight of us. I grew up with my grandparents because when my mom was pregnant, her child died, so she went into a state of depression, and my aunts who helped her would take me and my sister, for days, which turned into months, and years. I became really close to them. That was the way I lived for 19 years  – with my grandparents. I also didn’t remember my parents since I was two when I left my parents.

When I was 15 later on, I felt like my mom liked me less than my other siblings because she would bring my other siblings things from the store, and not me. My own mother would say, “Lo siento, se me olvido, porque no vives con nosotros.”: “Sorry, I forgot, since you don’t live with us.” I went to psychology, and that made me realize that my mom still loved me, and my siblings didn’t have the same advantages that I had when coming with our grandparents and aunts, as well as that, my mom had a point because she went through a lot. Now that I am a mother, I also know that I love all my children the same, always. One thing is that I believe that no mother should leave their children no matter what, but I have forgiven my mom and love her.

In my mind, I never imagined coming to the U.S, but it resulted that I had a boyfriend that wanted to force me to live with him. Also well he was older, and he was also married. He would come to my school and take me. He also had drug problems. My Mom and aunts decided for me to go to the US with him because I had the opportunity to come with a family that was going in 1999-2000. That is the reason why I am here.

Finally, before it was easier to get here and there was an opportunity to come with a secure family, so I decided to come.  My way here was typical like to most others.  It was hard in that it was a tough path, water ran out.  We  walked for days. I was fortunate to get to the U.S and have the guy there as well as my dad waiting for me.  I was taken care of.

I was here for 1 year and a half and the drug dealer got killed. I never liked the guy, so I had mixed emotions, when he died. He was never my boyfriend, he just really liked me. I was also scared before because he was obsessed with me. I was still upset he died because he is a human being, but he always looked for it, always getting in trouble, getting into drug problems.

A year and a half passed and I met your dad.  We rented in the same house and we met each other as we lived in that house, so from there we started talking; I lived in the garage, I had my dresser, a small closet, a t.v, a cellphone, a microwave, and a mattress to sleep on and, he lived in the living room. I got together with him without liking him.

Then, my dad kicked me out from where we lived, a garage we rented because here in California I only had my dad, and I only knew the road I lived in. Your dad which is now my husband told me to go with him, his attitude towards me was amazing, the way he treated me was mind blowing and I fell in love with him. Two years of being together, “El Rey de mi vida nació, mi primer hijo, que pelie mucho por tener”, the king of my life was born, my first son, which I fought a year to become pregnant and since that day it was being the most amazing thing that has happened to me. I enjoyed my king for 7 years, “y Diosito me mando mi segundo bebe, que ahora soy la mama mas feliz en el mundo”, and God himself sent me my second baby, which now I am the happiest mom in this world, and I hope to enjoy them for the rest of my life.

I don’t think I will go back to my country, the reason is that it is easier for me to give you guys a future, since there is better opportunities here than over there. For example, I can’t pay your career in school with my own money in Mexico as I am doing here at the moment, it really saddens me because my roots are over there, but my first exception is my two sons and I will stay here just for them because I want a future for both of them. I miss my family, the parties, gatherings of our town. If I am being honest, I don’t like nothing here in the U.S because I am alone, in a way that I don’t have anyone, but your dad, you, your brother, and my dad – as well as the future that awaits for you guys. Even though I feel that way, I live here better economically than in Mexico. I have had the opportunity to help my parents, aunts, and uncles economically.

I have everything I want, except my own house, but a house that I one day will have because we have had the chance and have being blessed to have our own company/business, in that we work at the moment really hard. Because of this, I don’t lose hope, “No pierdo la esperanza” of buying my house, it is hard, but not impossible because that is our goal, and I know we will do it!

Things are also good here in general, the only bad thing that has happened here is that, since I have a big family, in 2016 in the matter of three months two really close, important people in my family died. One hanged himself, and one was crushed by the thing in front of a bulldozer, it fell on his body. This was truly a letdown because I cried for 3 days, they were really close, one was my cousin, and the other was my uncle, more like my second dad.

Now that I think about it, if I would’ve stayed at Mexico I might of finished school or continued working in the fields like my family, I might of gotten married or not, I don’t really know, life in Mexico is sad because life is tough in Mexico since there isn’t really money for food, so we lived on a daily basis. Life is full of mysteries, I don’t really know how it would’ve turned out.

I feel happy having the husband I have and super proud of my kids because it is the best thing that has happened to me, as well as the things I love the most in this world, and I know all four of us will come out with our goals and projects forward and succeed. I am sad about not having my aunts that were like my own mothers and my mom because I know the years are passing, and most likely I will never hug them again. Colorín colorado esta madre se va a dormir…

This story was written by a student in the San Francisco Bay Area based on an interview with his Mom.