The “Promised Land” and Its Challenges 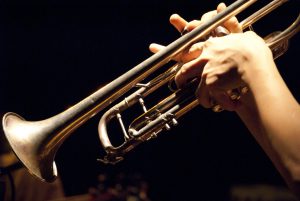 The person I chose to interview was my father, Enrique Aranda, who was born April 7 1977 in Jalisco, Mexico. He left Ahuisculco, the little town he lived in in Jalisco, when he was about 17 years old out of curiosity of the “promised land” and the opportunity he was given through music. Music is a huge part of his life; he’s been playing trumpet since he was 14 years old, and played in many Mexican bands ever since. He loves music with a passion, and it is what brought him to America and changed his life. He also enjoys playing soccer now, and works making shelves for different companies during the week and plays in a band at parties on the weekends. I chose my father because I feel as though his story deserves to be told, as everyone else who lived through the same situation he did. Crossing the border illegally is a risky and dangerous decision to make, and so his story is very special to me.

Ahuisculco, Jalisco is a small little town in Mexico, where my dad was raised by his two loving parents alongside 12 other siblings. Life for his family was a constant struggle due to the widespread poverty in Mexico, and often his parents struggled to provide everything that the family needed. Still, in his homeland he felt comfortable, accepted, and safe. Since he had so much freedom and his parents could only give him so much attention with other kids to tend to, my father was a mischievous kid when he was young and often got himself into trouble. He was and is very bright, but dropped out of school after the sixth grade because his parents couldn’t pay fees any longer, or give much money for lunch.

He began working in the fields with his father and studying music, which he made into a job for himself and became a hit for a little while when he played trumpet for a band in Mexico. One day he got news from his band member, saying fees to cross the border and housing in America would be provided for the both of them if they agreed to play in a band over there. Being 17 at the time, he was curious and was seeking adventure, especially after he heard many stories about how wonderful the U.S. was. So, he told his father he would be back, that he was only going to visit, but they both knew that wasn’t true. They said their goodbyes, and my father was off on his journey to the “promised land.”

The actual trip there was very hard. Crossing the border illegally is very dangerous and requires a lot of endurance and perseverance, which he had at the time being young. He remembers that, when they met with the coyote and the group they would be traveling with, they asked how long it would take. The coyote pointed to a hill not too far off in the distant desert and said, “All we have to do is cross that little hill. After that, we’ll basically be at the U.S. border.” My dad now knows that he only said this to lift spirits, but at the time he was not prepared for what he was to face. They passed the hill, and still walked and walked and walked until the day started to fade away. It was starting to get dark, and they still had not stopped walking. The people and my father would ask if they were there yet, and the coyote’s response would always be, “Soon, soon. We are almost there, just a few more miles, just keep walking.”

A whole day passed by and they were still walking. Soon, on the second day, they started running out of water and food. All my father had to eat were a few saltine crackers and a few drops of water. After that, everything had run out, and he could do nothing about his dehydrated body and aching stomach. To make matters worse, as it was getting dark, they passed by a ranch in the desert and soon were being chased by a pack of big dogs, probably from that ranch, and had to sprint on empty stomachs and dried out bodies. My father was so thirsty after this, that he drank from a puddle of muddy water that they walked by to keep from fainting. After awhile, they also passed by a group of weak, very skinny men who were begging for food and water. They looked to be abandoned, but the coyote didn’t allow anyone to help them and told everyone to keep walking. Instantly my father forgot about his thirst and hunger and kept trudging along, fearing to get left behind like them. After what seemed like ages, after walking for days without food or water, my father and the six others still remaining from the initially twenty-seven in the group, arrived at a little shack where other illegal immigrants waited to be picked up. It was not until my father and his friend were picked up that he finally felt relief and happiness; he had made it to the Promised land.”

Once in America, his jaw dropped at the sight of it all. It was so different from the ranch and little town he lived in, where you sometimes did not have enough to eat and had to wash your clothes by hand. But here, there were so many traffic lights and cars, and tall buildings. It looked much cleaner and very advanced, it was indeed as beautiful as the stories he heard. What he came to realise though, is that the stories had lied about how easy it was to live in America. He had heard that poverty did not exist, that everything was free and jobs were easy to get, that money was super easy to come by and everything was perfect. As my father interacted with the American world though, specifically the city of San Jose, he learned that in this world, without money or a job, there was no way to survive. Back home you could fend for yourself using your ranch for food and making your own living, but in America he learned that money was essential to surviving, and it wasn’t so easy to get. Still, he worked hard to adapt to his new environment, he worked many different jobs to earn money and always stuck to music.

He learned to drive from friends and went to school for a few months to learn English, though he also learned a lot by just interacting with English-speaking people. Though America turned out to be harder to live in than he thought, even harder than living in poverty in Mexico at times, he still felt very grateful that he made it safely to America and now has built a good life for himself here.

Now, my father has a more stable job working in shelving and plays in his band on the side. He has a green card, and is currently looking into becoming a citizen. He has really adapted well to the American culture and will strike up a conversation with just about anybody. Though his English is not perfect and he still struggles to read and write in English, he understands almost everything he is told in English and can communicate pretty well. He does often talk about going back one day, because he wants to fix up his house back home with the money he has saved up and give back to his family, since he is the only one here in America from his family.

He really misses the relaxed life one has in Mexico, without as much stress and worry. He also misses the feeling of a strong bond in his community, and knowing everyone in your town, because that is very hard to have in the U.S. since there are so many different people. Still, he really appreciates the opportunity to be somebody that exists here in America, that opportunity to go above and beyond and be very successful even if you come from a lower class. He may not be a huge successful person in America, but he made it from a tiny poor town to a thriving country and survived it all, and that makes him a hero to me.

Enrique’s story was written after an interview by his daughter, Ariana Aranda, a student at Eastside College Prep in East Palo Alto, CA.