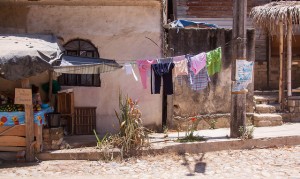 photo of a home in Jalisco by Chris Goldberg

Jalisco, Mexico. It’s a really beautiful state – where I live. My name is Claudia (name was changed). I am 25 years old. My family and I have a ranch that’s an hour away from the city. I just sometimes wished that I didn’t live like this. We didn’t have enough money to pay our bills.We had really bad jobs that would pay really low. I got so tired of living in Mexico because my daughter got really sick, she had asthma, and I didn’t have enough money to pay the doctor.  My son who was only 7 years old had to go to school. But I didn’t have enough  money to pay for his education or for me to give him money to eat because in Mexico, you had to buy your own food at school.

I wanted to cross the border because I couldn’t take it anymore. One day, I was at work when I got a phone call from the doctor telling me that my daughter’s asthma was gone. I felt a little relieved because my daughter was okay, but the bill was still too big to pay. The next day I got a phone call from my brother saying, “J. se quebro la mano” J., my daughter, broke her hand. I started crying because I had to go to the doctor and pay lots of more money. I didn’t know what to do, so I decided to leave Mexico. I decided to leave my kids behind so I could go to the United States and make a lot of money to pay all those bills.  I had to pay.

All I was thinking about was leaving to the United States by myself. My plan was that after I’m working in the United States, I can bring my two kids so we can all be in the U.S having a good life. And so I can pay all the money I owe the doctor. And pay back the money that family members helped me  with. And  help out my mother to pay the house bill. And so they can have money to buy food. And meanwhile send money for my family to pay for my kids’ lunch and education until I can bring them to the US. I  was desperate to leave.

I left Mexico by crossing the border, walking. It was really hard because I was scared that immigration was going to come for us. It was really scary and I felt sadness because I left my kids behind. Also, I was the only woman out of 23 men. It took us a month to cross, so I was with these men for a month. That was the most scary part.  I left the kids with my mother.

The first place I arrived in America was Phoenix, Arizona.  When I arrived, my brother came to Arizona and drove me all the way to East Palo Alto, California where he lived in a house. It was really hard for me because I would work cleaning at a building, but I didn’t understand anyone when they would speak to me in English. When I would go out with my family and people would ask me something, I didn’t know what to say. Even till this day, it’s really hard for me.  I only understand basic things.

(Eventually, Claudia was able to get the children across the border to join her.) I’m really happy now because I have a better life here, especially because my two kids are here with me now.  I also have a little one that’s only 2 years old.  And now I have a really nice happy family.

(Claudia has been working two jobs in the daytimes and nights, but she has paid off her family loans and the doctor bills.)

Claudia was interviewed by her daughter, Joselyn, who is a 9th grader in Redwood City, CA.