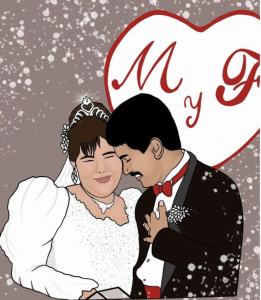 “A drawing of the couple from their wedding day.” Artwork by A. Lopez

My name is Maricela (name changed) and I am 52 years old. I was born in Apatzingan but I grew up in Aguililla, Michoacan and now I live in California with my husband and three children. I am a Preschool teacher and I love working with my kids even though they can be a lot sometimes. In my free time I also like to make necklaces, earrings and  bracelets for myself because I use them everyday. I used to live in a two story house with my 3 brothers and my sister. The top floor was where we lived and slept, the first floor was where we worked. My parents used to have a tortilleria. I would work there with one of my very close friends at the time and my parents. I first started working when I was in elementary school until I turned 25. I was going to school meanwhile but I stopped after high school. At the beginning I didn’t like working but after a while I got used to it. I did have some free time.

My friends and I would always go to the plaza. The plaza is like a park in my hometown where we hang with friends, eat, talk, walk around and of course look for boyfriends. That is how I found my future husband. His name was Fernando, he was 21 and I was 17 when we first met. We dated for 6-7 months and we broke up because he wanted to get married but I refused because I felt that I was too young. After that he returned to the U.S. I was devastated but I knew that I needed to put myself first. About 4 years later he returned for about 2 weeks for his brother’s wedding. At the time I was 21 and 6 months later he came back and wanted to try things again with me. I was a bit hesitant to start over but I gave it another try. We dated for 4 years and then when I was finally 25 years old he proposed in the plaza. 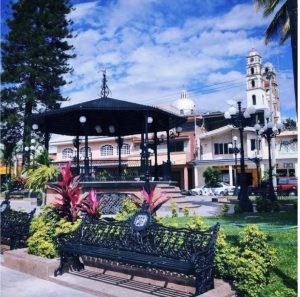 The plaza where my parents are from. It’s where they first met and where my dad proposed.

Fernando didn’t ask my dad for his approval like many people traditionally do. I’m not even sure my dad knew I was dating anyone. I just one day told him that I was getting married and he assumed that he was a tall, light skinned, blond, colored eye guy, but Fernando was the opposite of that. He was a bit short, brown skinned with brown hair and brown eyes. I got married in Mexico and Fernando was living in California. It was a big move but I knew I was ready and wanted to do it for my future. 18 days after my wedding I crossed the border for the first and last time ever.

Fernando, his 2 siblings and I were in a hotel in Tijuana waiting for the coyotes to call so that we could cross the border. They made us fake green cards so that we could cross the border. Before getting called I had to go buy a purse from the store to seem like I was shopping in Tijuana. In the hotel before leaving I cut into the inseam of my shirt and put the money to pay the coyote in my purse. My brother’s sister Mary got picked up. First she crossed the border walking while I had to cross it in a car. The coyote then came with an elderly lady that she was also helping pass. With me there was another lady that was crossing the border with us as well. The coyote gave us a pep talk telling us not to be nervous, while passing the border the lady with me was squeezing my hand. I kicked her a little hoping she would get the hint to stop. Our story was that we lived in San Diego and we came to Tijuana to do some shopping. The coyote did almost all the talking whenever she would laugh we would too even though we have no idea what they were saying.

We crossed successfully now it was a matter of getting to the San Jose airport. We drove a while to a Denny’s so that the old lady could eat and we waited for the van to pick us up and take us to their house. I was waiting for what felt like a year, van after van and Mary wasn’t in any of the vans, I was concerned. It was time for me to go. I was scared because I thought something bad had happened to her.

I was taken to the coyote’s house and I was sitting on their couch waiting and waiting for Mary to show up. The coyote asked “who’s picking you up”, and responded “Good question, but I’m waiting for another lady”.  I called my husband from the coyotes and told him about Mary not being there yet and asked who would pick us up. He said that he would ask his uncle who lived nearby. I was told by my husband to not pay until we were both there so I kept hold of the money in my skirt.I told them that someone would come for us and pay but not until Mary came. Finally Mary came and at the same time their uncle came.  I was so relieved when I saw her. I was happy that she was ok and happy to be leaving. I asked to use the bathroom and when I was in there I took the money out of my skirt $1,000 in my skirt, $500 for me and $500 for my sister in law.

When I came out with the money in hand the coyote concerned asked if I had been carrying it around and I replied “yes”. He told me “when you come again don’t ever bring money.” Confidently I said, “well I don’t plan on coming back”. The next day we bought 2 plane tickets to San Jose where we would be picked up. When we were at the airport in San Jose Mary and I were waiting for a while since her brother had gotten lost. Finally after a while of waiting we got picked up and went to the house full of my husband’s family, he had lots of siblings, seven of them to be exact. A house on the Peninsula, the house I raised my first child in.

I later ended up getting papers from my husband. My husband and I bought our own home and began building our family and had two more children. I became a substitute teacher and began going to Canada College to become a full time Preschool teacher. I was a part time student and a full time worker with 3 kids and a family to attend to. It took me 9 years but I pushed through it and got my associates degree in child development. I then became a full time preschool teacher. I struggled with the language when I first came here but going to school really helped and I soon learned it. I am extremely grateful for moving because I have my kids and family and I know they have a great future ahead of them.

The interview and narrative were done by Maricela’s daughter, Marycruz Lopez.