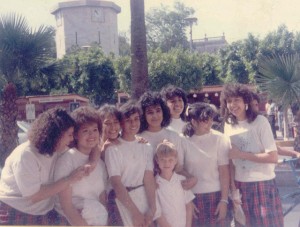 This is the story of a female immigrant that came to America, leaving her home, family, and memories to create a better living environment for her children. Her name was Patricia Hernandez Galvez and she was born in Torreon, Mexico in 1972. During her childhood she lived with her older brother Hector, her younger brother Freddie, and both her mom and dad. In her childhood she liked to go out to the park with her family and do various activities with them. She was very close to her parents and relatives during her childhood and liked to be with them as much as possible.

Growing up, her hobbies were basketball and taekwondo, she did taekwondo for 5 years and even made it to internationals. During her high school years her transportation was walking and later a public bus. On the first day she started travelling in the bus she met her husband Raul, though at the time they were best friends. In school, she was the second most intelligent in her grade (the first being her husband).

She later moved to another city in Mexico where she started attending college and later started her career as a public accountant for a popular company. During that time she was influenced by her father to do better and to improve in her life. He was always pushing her to be a good person and to make others happy. On a visit to Torreon she reunited with one of her best friends, Raul, and he asked her to marry him. She was surprised but said yes, and so did both of their parents.

They married 3 months later and it was Raul’s idea to come to America to start a new future. Patricia also wanted to create a brighter future by learning English so she agreed. While travelling to America, Patricia had many fears about not being able to learn English properly and of leaving her family behind for some time. They were planning on staying for only for 1 year when they arrived in America in July 2001 during their honeymoon.

Shortly after, 9/11 happened and scared Patricia about the dangers in America. They were about to head back but then Patricia’s first child was born early and held them back. He was taken care of by the American government because the child had been born in barely 23 weeks. There was a probability of death for the child and if lucky, would live with a probability of bad eyesight or hearing, but luckily the child had survived and is currently 14 years old. When the nurse asked for the name of the child, Patricia’s husband immediately blurted out his own name, so the child is named Raul Jr. and is an intelligent boy despite the many problems he had as a child.

They lived in a small apartment and Patricia still had many difficulties with the language and was getting frustrated about living in America. She struggled a lot economically, socially, and politically. Shortly after, Patricia had her second child and named her Lucero, the reason being is because it was her best friend’s name and also because that was the name of the town her husband used to live in.

The kids grew and to this day Patricia still has many memories about them being funny, playful, and mischievous. The family then moved to a bigger house because the one they needed more space for the children to live in. The children attended school and learned English easier and much faster. Because of this, Patricia was relieved for the children’s future but still worried about her own.

Today Patricia is living in a two story house in San Antonio, Texas with her husband, her 14 year old boy, and her 13 year old girl. Her children are working hard to later help out their parents and to make sure that they are fine. She currently works at a restaurant and everyday works harder to learn and speak English. The family still keeps some Mexican traditions such as eating tamales on Christmas.

One thing that she hopes for the future is she gets to see the day her children go to college and that her children develop into successful people. She still wonders how she was able to immigrate into another country and be as successful as she is now but she is grateful that all turned out great and everyday she works to be a better person. During her journey of crossing to another country she was unfamiliar with the language, culture, dressing, and methods, but despite all the differences, she tried and succeeded in a life she wasn’t expecting.

I would describe Patricia as an optimistic person that never gives up and tries her best to make things right.

Written by the daughter, Lucero.