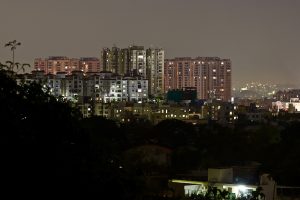 My mother was born in Andhra Pradesh, India. From the beginning, she was keen to learn about the world around her. Growing up, her three siblings would walk her to school in the morning. After school, she’d pick up something to eat at the family restaurant and then run to the library, eager to read. A large part of her passion for reading was the chance to “immerse” herself in an entirely new world, and this interest in learning led to her emphasis on education and her long background in academia.

In India, sixteen year old students chose what sector to study for the final two years of secondary school: math, biology, commerce, and the arts. My mother had always liked life sciences, and at times struggled with math, so she decided to head into biology. However, at the end of this intermediate education, biology students tested into undergraduate studies in medicine, dentistry, agricultural science, or veterinary science. My mother was at first split between dentistry and medicine, but ultimately decided to pursue orthodontics at a dentistry school in a nearby city.

As a result, in 1982, at 18, she moved from her small hometown to Hyderabad, the state capital and one of the largest cities in the world, a change that she describes as a “leap onto the moon”–both exhilarating and disorienting at once. Eventually, however, she adapted to her new life in Hyderabad and finished her bachelor’s degree, later pursuing a MS at the same school.

After receiving her master’s degree in India in 1991, she got married to my father, who had already moved to the US in order to pursue his master’s degree in civil engineering. If the transition from her hometown to Hyderabad had been a leap onto the moon,  moving to the US was no doubt something of a jump to the stars, especially considering my mother hadn’t ever expected to leave India, but she wasn’t intimidated; “[For] any person”, she says, “coming to America, it’s like a dream come true”.

Of course, this dream took a significant amount of extra work–including having to repeat her DDS and master’s in America (Michigan and Boston, respectively). Moving from Michigan to Boston was yet another change, but a welcome one: she describes Boston as the most beautiful city she’s ever lived in, with an emphasis on academia and the arts. After receiving her degree, she left Boston and traveled across the Northeast, eventually opening her own practice.

Overall, she has no regrets about her unexpected international journey. In fact, she notes that she grew into a different person as a result of her time in America, and offers a final reflection–“You have to get out of your country to grow as a person.”