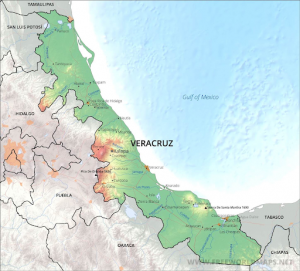 I grew up in Cuitlahuac, Veracruz, a pueblo in the city of Cordoba. We were in the south so it was a lot of ranches where me and my two sisters grew up. When we were growing up we were poor, we would have to go to the city to get a job to pay for the food and our clothes.

We only have one pair of shoes for the entire school year. All our family grew up in that pueblo, all in the ranches, I remember my grandfather had pigs, cows and horses and we would help him with the piglets. We would also go fishing and we would catch some eels or something that looked like snakes and we would have to cut them open to eat, it was very nasty.

As teenagers we would go to the different parties around, one time your grandmother caught us and she locked us out so me and your tias and our cousins had to sleep outside. It was also pretty tough growing up there because people in the ranch were very small minded because most of the people there didn’t go to school. It was hard to find work and the government was very corrupted.

We started to hear through other people about what people could do in the U.S. the opportunities they were given and that they were apparently making a lot of money. Then we all started to head to the U.S. At first Tia Adela and Maria went, then Tito (Tito is a nickname for my mothers stepfather) and he took my older sister with him.

Then it was me, when I left I went through the desert. I wanted to go because I had dreams to create a life so I went. I went with five other people, one of them being a well known friend. We had to go to the border and in that time it was just a small wired fence, I found it stupid that it was only a small thing separating two different countries. After that we had to cross the desert, it was cold because it was February and it was an endless desert. We had to walk the whole way, I thought it would never end but ended up walking 2-3 hours.

I remember at one point I got caught by ICE, they caught me and my friend. They asked us if we had any ID and where we were from. I didn’t have any ID on me and they said if I didn’t have any on me then they would send me to a random country, so I proved to them that I was Mexican by saying the national anthem and all the states and capitals. Then they just dropped us off on a curb.

Me and my family lived in a four bedroom apartment. I attended night school to learn English because people were constantly telling us to speak English because we are in the United States, so I learned English to defend myself against those people. At that time as a 16 year old we couldn’t wear red or blue because that would signify that we were in a gang, but I didn’t stay in school for long because I had to bring over my other two sisters and my mother.

At that time we couldn’t get drivers’ licenses in California because of Schwarzenegger so we had to drive to Washington state to get our drivers license because we couldn’t be without one. After that I was able to make my own company of house cleaners and I married your father.

We have lived here for about 20 years. It’s been hard leaving home but it brought a lot of opportunities for our family that Mexico wouldn’t have given us. What we miss about our home was the food, it was much better than here in the United States and the fruits. I have adjusted with the language that people speak in the U.S. and some cultural events like Christmas but we still celebrate our own culture because we love it and we will continue to celebrate it and be ourselves as if we were at our own home. Immigrating helped us with our jobs and dreams.

The interview and narrative were done by the daughter, Stephanie Morales, who is a high school student.