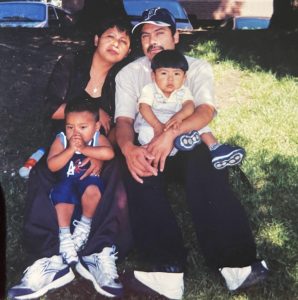 “I’m from a ranch, in San Pedro La Junta – State of Puebla. The farthest back that I can remember is when I was just a kid, when I was 10 years old. I spent my time taking care of animals, taking care of crops, and planting tomatoes, chili, and pumpkin. At 15 I spent my time in the city of Chalco going to school and working constructions with my brothers, although it was for a couple of months only. At around 17 years of age I came to the United States.”

“I never thought of the money. I always thought of the opportunities that the US offers. People always talk about opportunities and I fell in love with the idea of having those opportunities. I never really thought that I was going to stay here in the United states for long, for me, it was always going to be something short term. Perhaps only about 3 years, but life had other ideas.

It’s a good and bad thing that I’ve been here for a long time. Bad because I always planned to return home, but good because I made my life here and its more personal to me at this point. Also I had you kids and I just hope that one day you can admire me.

“I crossed (the border) 2 times and both times I crossed by car. Actually, the first time, I just walked across the border in Tijuana and moved to San Isidro. From there I went to Los Angeles and a car picked me up and brought me here in the Bay Area, specifically Mountain View.

The second time I came with your mother through Phoenix, Arizona and crossed the border inside a car and went almost the same route as the first time. Now that I am reminiscing, I actually crossed the border 3 times. The third time was in between the two stories that I mentioned. I was in the bed of a truck and I was able to get into the U.S through Phoenix and then going to Las Vegas. I then went to Los Angeles and got picked up once more. It wasn’t really dangerous, Im not sure how it is now and I wont say it is dangerous cause I haven’t experienced crossing the border today.

I actually was stopped for a longer period of time in Mexico when staying at a hotel. The most dangerous thing was walking with your mother before we got into the vehicle that we needed. Each trip probably took about 4 hours because we had to make sure no one was following us.”

“When you are young, you don’t see the difference (from Mexico to the US). I didn’t really notice a huge difference because even from the beginning, I knew that the first thing that I was going to do is work. Perhaps one of the greatest differences was the language. If I don’t understand it now, I for sure didn’t know it back then.

Luckily, I was able to find work immediately, about 3 days after I got here. I know English a little bit now, I can understand it, but I can’t speak it clearly.” After being here, with all of the opportunities that I had, I thought I was going to have money, but then I realized that money doesn’t have much value. If you take money from here [United States] to Mexico, you will have money, but money here and there doesn’t have much value.

What has been your biggest accomplishment since you got here? Cual fue to mejor logro desde que llegaste aca?

“See you guys grow up each day more and more. Trying to help you and while I don’t have money, I am able to provide for you. There is no greater feeling then seeing your kids grow up and succeed.”

Do you plan on returning to your home country? Planeas regresar para atras [Mexico]?

“ I do plan on going back to my home. I actually have two Ideas. For starters, one idea, is going back to the ranch where I grew up in Puebla or I plan on finishing a house with the land that I bought in Mexico. I might just end up going around the state of Puebla and Mexico city, the places that I grew up in and almost definitely have changed over the two decades that I haven’t been there.”

“I think that my culture is rich in Mexico. I don’t really know what it is like now since I haven’t been there in 20 years, but in all honesty, when I was there, people were heavily welcoming. If you go to Acapulco or Veracruz, you can see a huge Asian, African, and American population there. When you go around the country across the multiple states, everyone speaks differently. I mean we all speak Spanish, but we all have different accents and we welcome them. It isn’t like here in America where everyone is super divided. I mean there are big problems like the cartel problems, but what country doesn’t have people that are evil.”

“I have lived through so much, both good and bad. I have painful memories and happy ones, but they have both helped me change for the best and make me who I am. I am a firm believer in God having a plan for all of us and if this is the way that God wanted my life to play out, then why change it? I’ve enjoyed it through thick and thin, and I will continue to enjoy it until God decides to take everything away from me.”

(Author’s note) Hearing the stories that my father had to tell, I think that I have a new appreciation for everything that he has sacrificed in order to give me the opportunity to succeed. Opportunities are big things in my family and I think that we are all just trying to go through life without regrets. I think that my father, and to the same extent my mother, have given everything they have to let the next generation succeed. This is something that I will forever be grateful and I will forever say with confidence that my parents were able to achieve the American dream.

This interview, conducted in Spanish, was done by the son, Pedro, a student at Foothill College in Los Altos Hills, CA.