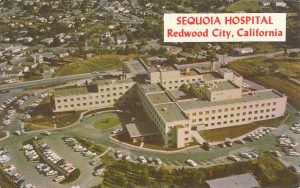 When finding out that I would be given an assignment to interview someone in my family on their immigration story I immediately thought of my grandmother Vivian – or “grandma” as I call her. My grandmother who is 74 years old has lived here in the bay area since she was twelve years old. I chose “grandma” because I am always questioning her about how life was like in a segregated society seventy years ago, and what each decade was like to live in. Vivian’s family migrated from Austin, Texas to Menlo Park, California in 1954. Now retired, she used to work as a nurse and administrative assistant at Sequoia Hospital in Redwood City for a total of 42 years. Her hobbies are sewing, reading, going to the movies and shopping for clothes.

The first twelve years of Vivian’s life were spent in a small shotgun house as she describes it – a house where all the rooms are going straight back so there is just one long hallway leading to each room. Surrounding her wooden home was a field and many different animals. Vivian’s family farmed and kept animals on their property. She remembers not being able to go touch the pigs and the horses outside until after she finished her homework and completed her chores. She also remembers the large Weeping Willow tree that was outside her home that reminded her of her own grandmother because her own grandmother had planted that tree. Being the oldest of six kids, she had five siblings to help take care of. Their names were; Melvin Jr. who was known as Sonny, Laverne, Robby, Bobby, and Clifford who was called C.J. She mostly took care of her three younger brothers, Robby, Bobby and C.J. as they were really little being over five years younger than her.

After learning of her father’s death in a tragic accident on his job, Vivian’s mother told her that she would be sending Vivian and her siblings down to California with their aunt to live with their grandmother. Vivian’s mother would join them in California a month later, as she had to pack up and settle everything. Although Vivian had no say in the matter since she was a child at twelve years old, she was very happy to be moving to California because she had visited before – as some of her cousins lived in San Francisco. Vivian travelled to California by train, going from Austin to Menlo Park. Vivian had always rode the train before but this train ride was the longest she had ever took because it took three days on the train for them to finally get here in the Bay Area. Something she remembers about the migration experience was that, despite the gloomy occasion, she was happy to be going to a new place, and this was the first time she would be with other family members she had not seen in awhile.

Vivian enjoyed living in California a lot since she was able to meet new and different people at school and in the neighborhood. While at high school in Menlo-Atherton, it was the first time she had met people who were not only black but also white. Vivian had always went to all black schools in Texas, but when she moved here in 1954 all schools were desegregated due to the Brown vs Board of Education ruling. Fortunately, she did not suffer any racial conflict with the students there in her school as they treated her very well and did not say anything bad about her publically because of the color of her skin. Vivian says that she feels that she did not encounter any racial discrimination until she decided to go to nursing school, in which the nursing field was dominated by white people at that time. When Vivian first came to California, it was also her first time seeing the ocean and going to a zoo. Although she had always lived with animals in Texas, she never knew of a zoo that held animals for people to see.

After becoming an adult, Vivian got her first job at Sequoia Hospital in Redwood City as a nurse, a job that she held for 42 years. Nursing had always been a dream of my grandmother due to her passion for helping others and caring for them. Because of that Vivian says that the 42 years went by very fast. Unfortunately, Vivian had to retire in 2003 when she injured her back lifting a patient and couldn’t work with patients anymore. In her last ten years leading up to retirement she worked as the Head Advisor Nurse and Administrative Assistant working in the office filing patient’s paperwork and helping families schedule their surgeries.

Today Vivian lives in a modern three bedroom home in the University Village neighborhood of East Palo Alto on the edge of the bay (You literally can see the Dumbarton Bridge in her backyard!). She moved to East Palo Alto in her own house in 1961 at 19. As a retiree for thirteen years, now Vivian spends her time volunteering at church and acting as our “family nurse”. She has lived in her own house here in East Palo Alto for almost 56 years and is very adjusted to living here in East Palo Alto and the Bay Area. Although Vivian has no intentions on moving back to Austin since she has rooted here and has had a family here, she does still have cousins who live back in Austin, and her brother Robby moved back to Texas about twenty years ago. Additionally, Vivian most appreciates that her home is close to major cities like San Francisco and San Jose, which gives her the ability to travel to these cities whenever she wants to.

Vivian Jordan was interviewed by her grandson, Rayshaun Jordan, a student at Eastside College Prep.