No Jobs – Must Move (Mexico) 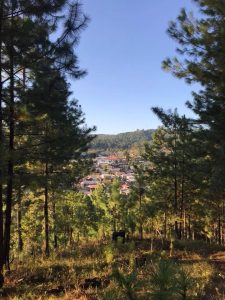 When I was young in Dos Aguas, Michoacan there were pine trees all around the mountains I lived in. Due to this, the main job for workers making a living in my town was working at the local  lumber mill. Every morning I would wake up to the sound of chickens and roosters clucking in the early morning. The cold air from the mountains in the morning along with the sound of my mother and her sister already up and cooking breakfast. Later on in the days I would go see my grandparents whom I held very dear to me in my heart, along with some of my cousins who were around the same age as me.

But alas this did not go on forever, the main occupation in my town, the lumber mill had shut down for good. This left my father unemployed and no way for us to get any source of income as there were not as many jobs available. Due to this my family then decided to move to the U.S. in search for another job although this is not what I wanted at the time it was not something in my power that I could change. When leaving my hometown I also left many different people and possessions behind, such as my grandparents who I loved with all my heart and also my dog who I also shared affection with. Finally it was time to leave all that behind and go on a bus to my new future of different cultures and languages besides my own – clash together.

As soon as I arrived in America I had to share a home full of many different people that I didn’t know but was somehow related to. I was mad at the fact that we left behind our perfectly fine home for ourselves back at home for this cramped house with a bunch of strangers. When I started attending school I had to take ESL classes but since I was of a younger age it was relatively easy for me to learn English faster than most. But I also had to deal with the cultural aspect of things such as different foods and games. The most difficult change however was that the place I moved to was 100x hotter then where I lived before, I used to live in cold mountains but then I was forced to live in the hot valley of California.

(Author’s note) Nowadays my mom spends her time at work and then after she gets to relax by either listening to audiobooks or watching some of her favorite shows and movies. Although my mom left her hometown she has gone back for a little bit when she was in her late teens. She did miss both her grandparents and dog but unfortunately both are not here with us today. Now my mom has adapted to her current life along with culture and language as she speaks both fluent english and spanish but we still hold some culture in our daily lives with food and such.

This interview and write-up were done by Abel, her son.