No Family Support But Determination (Mexico) 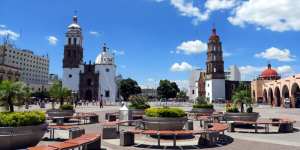 My name is Maria (name changed) and I’m a single mother of 4, I came here seeking a better life but instead had to tread through the trenches of reality and cruelty of life but at the end of the trip I made it through and was able to do it mostly by myself as a young adolescent who was still learning her way through life. Through all my hardships, I not only was able to raise a family but I was able to do it mainly through my perseverance and my efforts to keep going even when it got hard.

I was born in Irapuato, Guanajuato 1988, Mexico. I lived there until I was three and then I moved up to Tijuana with my parents. When I was 6, I crossed the border for the first time with my parents with not much difficulty. But then things took a turn for the worst when my parents divorced and I was sent back to Mexico in 1996, where I lived in a ranch with my aunt and other family back in Irapuato.

Things were humble for a while as I remember hunting for rabbits when it was really hot and the land was vast with lots of trees and I remember having a giant pot where we made food because we didn’t have a stove. Some days we feasted and other days we would only have a couple of tortillas and beans to eat.

At 10 years of age I started working and I picked fruit and lots of peppers from the ground having aching blisters on my hand but I continued to work. I didn’t have much of an education since I was never sent to school and I only have a fourth grade education.

After living for some time in my aunt’s house I remember my aunt saying, “ya no podemos cuidarte  por mucho, tienes que buscar un nuevo hogar” we can’t take care of you for much longer you have to look for a new place to stay at. I wasn’t even 13 but I started to go from home to home and I didn’t always have a place to stay at and it stayed like that for quite a while and it was hard being a kid and not always having money for food or having a place to stay at.

At that point in time, I remember saying “ Que voy hacer, No tengo donde irme” What am I going to do, I don’t have a place to stay at. It was the year 2001 and  that’s when I decided that maybe it was best to find my parents back In California, Maybe it was best that I left Mexico and look for a better life in California.

I tried crossing the border at fourteen years of age, four times before finally getting to California. The first time I tried using fake papers as I had been in California before and knew a bit of English. I was nervous and was very scared and I was only fourteen and I had no family with me when I tried going into California. I was caught and I was thrown into jail where everything was cold and it had an eerie feeling, I was in a room with multiple other people. They were all quiet and scared just as I was. There was one toilet and there was no privacy when using it as there was no stall.

Finally after two days I was let out since I had lied about my age and said I was 18 so they would let me out without any other problems. I didn’t give up because I couldn’t go back to the life I was living. “es la única opción que tengo”, it’s the only option I have left, I said. The second time I once again tried shortly after getting released and I tried going through the desert and I went with a coyote, he knew the path to get to California and knew where to go. We walked for two long days, my feet ached as I had lots of problems with my feet since I was born but I never had enough money to get the proper medical treatment.

When we were about to get there, there was only 1 or 2 miles left but were caught just before arriving, The officers who caught us knew Spanish but only talked in english even though most of the people only knew spanish or very little english, I remember translating what the officers were saying as I knew a little bit of it but couldn’t talk much of it. I was once again returned to a similar room as before, Cold and very frightening as I was just a kid and had no family to talk to, “dios mio, que voy hacer” My lord, what am I going to do, I said in anguish. I felt alone and tired and couldn’t believe I was close but yet so far from making it to California.

The third time went a similar way and like the previous times I only lasted 2 days in jail. The fourth time was the hardest, I was crammed under a tire compartment in a truck with another pregnant lady. It was hot and humid and I could feel the sweat from the heat and the anxiety I had. That time there was a huge game happening at that time and the gates where the cars passed the borders were wide open. To make sure I wasn’t smelled by the dogs, I was poured with coffee and I had to eat raw coffee so my mouth would be covered with the coffee smell.

I had gotten lucky that a big game had been happening because it allowed the gates to the border to be open for a while and I hadn’t been caught because there wasn’t much checking. The hard part was Staying in the compartment with another woman who was pregnant. I Was crammed and it was really hot and I couldn’t do much but wait for hours crammed in a hot space nearly under the vehicle. Throughout the whole trip I prayed that I wouldn’t get caught. I had tried crossing for 4 weeks in total and I had finally done it.

I got to California in the year 2002 and It took me a day to get to Los Angeles where I met my mom again when I was 14. She didn’t say much and had a cold look on her face. “Donde vamos a ir?” Where are we going? I asked. “Vamos a ir a Redwood city” we’re going towards Redwood city, She said

I was still new to California and I didn’t know if it was going to be any better than Mexico. I preferred my father as he was more supporting and caring than my mother but I couldn’t live with him as he said “No puedo cuidarte porque no estoy en la posición para mantenerte y darte un hogar¨ I can’t take care of you because I’m not in the position to give you a home.

It broke my heart to hear that but it was true as he struggled to have a place of his own as he lived in a house with other men and he would work a lot. I had to live with my mother who didn’t treat me as a daughter since she had gotten with another man. At the age of 15, I was taking care of her children and raised them as my own as I fed them and took them to the doctor and did a lot of things for them. Even then I wasn’t treated like a daughter as I had to pay rent while I lived at my Mother’s home and I wasn’t given much food and they even hid food from me.

When I started working in California the same year, The very little money I made was taken from me by my mother and I was only left with 100 dollars a week or less and I still had to take care of her kids and pay rent and find a way to eat. I suffered a lot while living with my mother and it wasn’t any better than being in Mexico. In 2004, I was pregnant and I was 16. My mother kicked me out the house and I had very little money and nowhere to go. I would be in friends’ houses for a while but not for long. I would be a single mother at 17 as the father had left. My first kid had been named after my father as my father had been supporting me throughout my whole life and had helped me in every way he could, I decided to name my first kid Diego (name changed). When I talked to counselors lots of them told me that I should abort as I was young and it would be easier but I didn’t want to and I continued to persevere.

When he was born it was very hard because I didn’t even get to see him as he was taken by 10 doctors because he had lots of heart and lung issues, The doctors told me that he needed to have lung surgery and he wasn’t even 1 year old and that he had about an 80 percent survival rate. I was scared and frightened as I was alone at 17 and didn’t even have a home or a car to get to the hospital every day while my son was incubated for months having a tube attached to the side of his lung to help him breath. I was lost and frightened, Although I would sometimes have to walk for hours even after giving birth and hungry, I would still spend lots of time in the hospital with my son as he was an incubator for a long time.

In 2006, my son had his surgery, worry ran through my veins, and hours passed by but eventually he made it through and I was told that he would be fine. Throughout the first couple of years with my son was hard and I would sometimes not eat just to give him food instead and It was only me and him, I made it through and eventually found an apartment.

In 2020, life is much better. I have my own small apartment with one room and I live with my son who is now in high school who is quiet and usually very serious and my two other kids who are trouble makers and are both in elementary school. The youngest is in 1st grade and he is energetic and the loudest one. My daughter is in 3rd grade and can be very helpful with the responsibilities at home but can give a lot of attitude. I am most proud of being able to raise a family by myself and maintain stability and I work as a housekeeper and take care of a house. I am most proud of my son who has always helped me in any way that he can and he always takes care of his siblings and helps them with homework. He has pursued an education on his own and I feel proud that he does things without me telling him or having to push him. I am proud to have my family and to be able to maintain some type of stability and have a home for my children.

This interview and narrative were done by her son.