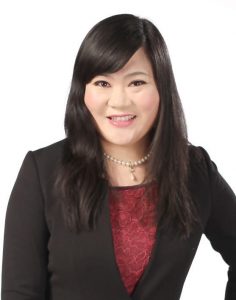 Lynne Ku is an ambitious, caring, and persevering force. She was born and raised in Taiwan and immigrated to the United States in 2001 to join her husband who had already been living in San Francisco. Her guiding motto is “just get it done” and she tackles whatever the challenges are with a commitment to overcome them for the benefit of her community.

When she was a high school student in Taiwan, Lynne Ku’s dream was to become a journalist. To pursue her dream, she went to college in Taiwan and majored in journalism. After graduating, she worked in the media industry for several TV stations. After she came to the U.S., she landed a part-time job at KTSF News as a news correspondent, the channel that delivers news throughout the Bay Area to its Chinese population.

She translated English script into Chinese and practiced her writing and translation skills on the job. Successively, she went to San Francisco City College to take ESL courses in order to improve her English skills. After serving three years in news writing, she got a position as a reporter with KTSF News. Because of her assiduous work, she eventually landed a position as an anchor.

Mrs. Ku has been working for KTSF News for over twenty years. The news stories she produces cover the entire Bay Area, including Santa Clara County. Her job plays a big role in helping her community. Within the Chinese community, there is a significant need for information in their native language. She helps those who have language barriers to get the right information in an accessible way. Her job serves as a bridge to bring the mainstream news to the Chinese community and make people’s lives easier.

This media outlet also educates the larger community about the issues and priorities impacting the Chinese community, such as stories about immigration more broadly, along with immigrant and civil rights coverage more specifically. Mrs. Ku’s coverage of these stories is of special importance for the community.

Although Ku has lived in the U.S. for over twenty years, she still maintains some Chinese traditions and customs. She shared, “In Chinese communities, we care about family, we put families first. Also, we celebrate Chinese Festivals, including Chinese Lunar New Year, and mid-autumn festivals.” Most of the time Ms. Ku cooks Chinese food at home, but she also likes to try the many different flavors of American cuisine, including mainstream American, Latin American, Italian, and other types of food.

In Taiwan, people work very hard. Here, the hard-working culture still impacts her, and she wants to contribute her very best when doing her job by making the news she writes relevant for people’s lives. One of the benefits of life in the Bay Area that Ms. Ku emphasized was the fact that she started to enjoy the quiet life, instead of the extremely busy pace that she experienced in Taiwan. Since coming to this country, she has also learned that we need to speak up to protect our individual and collective rights.

Not only does she care about her community, but she cares about the refugee and homeless communities. She thinks that resources should be distributed effectively to help refugees and homeless people, referencing housing and education as critically important. Education could help people to learn skills to support themselves, while special programs could help refugees to develop skills to transition.

The interview and narrative were done by Isaac Zhang.