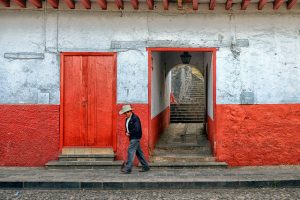 My name is Gelo Ochoa, I was born in the house of my grandparents near Aguililla, Sergio Rosales is my son. I migrated from Michoacan Mexico and in the present day I live in Redwood City, CA. I take care of children, clean my home, and go to school most of the days. My son decided to choose me because he has heard me talk about some stories about the time I crossed the border with his father and my brother and because he had known that after a few days of being in America he was born. Throughout my whole trip, I was pregnant with him – later to be known as Sergio.

I lived on a ranch near Aguililla. We had cows and goats and dogs all of which I liked. I lived with my mom, dad, and brothers and sisters, and I was the oldest out of them all. I remember that our home was made out of adobe, sheets of metal, and wood, I also remember that my father was killed about 4-5 years before me, my husband and my brother decided to leave. It was the decision of me and my husband to leave Mexico to look for a better and safer place to be able to find a place to work and a place to live in peace.

When our trip began, we drove to an airport and boarded a plane at night. I remember I was a bit scared in the plane since it was my first time on one, it was also very dark inside the plane I remember that it was mostly a silent ride and most of the people were sleeping. Once we landed at Tijuana we had hired people called “Coyotes.” They were people who would get us across the border only if they were paid first. As we were crossing the desert in an old vehicle with the rear view mirrors spray painted black so that people could not see us in the vehicle, especially La Migra, (in English, they are known as the border patrol). Once we were in the desert there was a group of people who we called Los Vetas, and those people helped out people who got lost in the desert, and so when crossing they thought that the vehicle we were in was filled with drugs and so they began to chase us. Los Vetas had brand new trucks which would outrun the vehicle we were in and they had microphones. They screamed on the microphone to make the Coyotes who were driving to stop, but the coyotes believed that la Migra, the border patrol, were the ones chasing them and so they did not stop their vehicles.

Instead, they tried to outrun them so that they would not be able to catch up. But then Los Vetas took out their guns and began to shoot at the car and popped the vehicle’s tires and we ended up stopping. When the vehicle stopped I fell forward and cut my knee open. Los Vetas began to beat up los coyotes because they did not listen to their orders. I was very scared that they might harm us as well, or maybe even kill us all. But then I realized that all they wanted was to receive money because they thought that the vehicle contained drugs. But instead Los Vetas gave us a ride to a place known as Tecate and I was then sent to a clinic where they checked if I was doing fine and if I had any problems. Once they let me out I was given a sopa maruchan and a water bottle. Then we were informed by Los Vetas to find a new coyote who can actually get us to America.We found a new coyote that we paid again, and the next day we started our journey to America again.

The month and year that we entered America was February 2001. When I first arrived I noticed that the food was cooked differently and there were more people and more buildings than in Mexico. We rode a car from Las Vegas to East Palo Alto where one of my brother’s wife lived and then we spent some days adjusting to California. I would usually go to La Estrellita, a store near University street and I would get bread and other foods there. I would also try to help my husband to look for work. After about one week we were on a trip to San Jose to see a job that my husband could work in, but it was asking for someone who could speak both English and Spanish. So we stayed in San Jose with a family member for about a week more until we could get a ride home. When we were going back home I was taken to the Santa Clara hospital, where I had my child named Sergio. We headed back home once I got out of the hospital. A few months later my husband worked as a tree cutter in a company and we eventually rented a house and we bought a van.

Now I live in a home with my husband, and my five children, one of them which is a boy and the rest are girls. Most of my family has already moved to America except one of my brothers. My husband helps me keep in touch with my brother who is still in Mexico. The rest of my family and my mother live near me in the Bay Area. I feel like I have adjusted to living in America throughout the years that I have been here, and I have been thinking about going back because it seems as if the next president might want to make immigrants leave America, but hopefully the government and the constitution could stop him. What I appreciate about my new residence is that it seems to be a much safer place than it is in Mexico, because in Mexico there was a lot of violence and we were all at risk. So when my father was murdered we really were convinced to move to America.

The names have been changed in this story that was written up by “Gelo’s” son after he interviewed her.