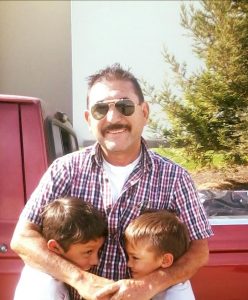 This is Enrique Lopez in 2011 with two of his grandsons, he lives in San Jose, California.

“The main key to being successful as an immigrant is saving up as much money as you can and that will be the most useful thing in your life as an immigrant.” My parents made sure that that idea was stuck in my head since I was young.

I grew up on a farm. My father Cirilo and my mother Conchita were born in El Bajío de San Jose, Jalisco, a ranch with lots of dirt. They both came from a family of farmers. My father worked as a driver for a truck that picked up milk from the nearby towns and took them to Lagos de Moreno, Jalisco where the Nestle factory was located.

There were many things that I learned from my father but the most important thing he taught me was honesty. He told us a story that when he was on his way to Lagos he would find people that needed a ride there and they gave him money to give them a ride, but my dad never kept the money and gave it to his boss. From my mother I learned that if you save up you can accomplish anything, she had a gas stove in her ranch where all the people still made a fire to cook. She stayed at home because taking care of her 13 children took away all her time. I was number 13, for me my lucky number.

When I was six years old I had an accident that hurt my eye pretty bad. I remember I could barely see that day. When that happened I saw how my mother confronted my father to tell him that I needed medical attention, my father loved me but he didn’t think we had enough money to see a doctor. We didn’t end up doing anything about my eye and I would have a hard time seeing for the rest of my life. My mom loved me too much so she convinced my father that we needed to move to the nearest city so I could continue my studies and be the first person to graduate from high school.

We moved to Lagos de Moreno, Jalisco where my dad continued to distribute dairy products for Nestle. I remember smelling the fresh cheese he brought home and it also tasted so good in a “taco con frijoles”. The main reason why we moved was so I could finish school and that’s what I did, none of my siblings graduated from high school and my parents wanted me to first person to graduate from high school. I always helped my dad when I was home and he made me work really hard when I was younger. Because I was the youngest out of 13, I looked up to my older siblings and I had a good relationship with everyone in my family. Lagos wasn’t a really big town so you didn’t see that much outstanding things.

One thing that was really beautiful about the town was the churches because the architecture and time that was put in to them was really amazing. After I graduated from high school I became a truck driver because all my cousins had learned to drive big trailers since they were 16 years old and I learned too. I distributed milk from one place to another for Nestle and it was a pretty difficult job for how much they paid me.

I was 27 years old when I married a beautiful girl named Chelita with whom I had 5 children, Alejandra, Isabel, Viridiana, Enrique, and Juan, “mis amores”, but as my father, I dedicated most of my time to work and that relationship ended 15 years later. I then started working as a owner of a trailer in trips from Lagos de Moreno to Coatepec, Veracruz where I met my second wife and had 3 children, Andrea, Carlos, and Luis, “mis preciosos”. At one point work was too much and I didn’t want to make the same mistakes as my first marriage, and I started thinking of something different…when I was 50 years old I decided to make a change in my life.

I had come to the US to visit, and I liked the order, how everything was so clean, the respect of the people and I always heard that this was the land of opportunities. It was because of that, that I sold everything I had in Mexico and with a fair amount of money, I brought my second family to the the US. “Venir a los Estados Unidos fue mi decisión”,coming to the US was my decision.

My trip here was pretty calm. I remember telling myself and my second family, “todo va a estar bien”,everything is going to be alright. We took a plane here from Guadalajara International Airport to Dallas International Airport and from Dallas we took a second plane to Virginia in the east coast. When I was in the airport in Dallas everything I saw and touched was super clean. In my head I told myself, “esto no puede ser posible”, this can’t be possible. We all came in with our VISAs and with some money from the things that we sold.

I never thought that the money from Mexico turns into very little because of the currency exchange and it was because of that, that I went from being my own boss in Mexico to having two jobs that barely allowed us to subsist in the United States.

During those days the only good thing was spending time with my children that were small at the time and I enjoyed being with them very much “mis preciosos”. Virginia is the coldest place I know, it was normal to see 5-6 feet of snow after a snowstorm I could always feel how my hands were super cold. I had my own car in Mexico and here I had to travel on a bicycle from one place to the other, and I had 30-40 minutes to get from one job to the other. I worked 14 hours a day at $5.50 an hour.

One thing I remember is that I used to fall asleep standing of how tired I was, I was 50+ years old. My wife and I started having arguments because of the lack of money, and “el amor se fue por la ventana”, love went out the window, and like that my second marriage was over. The thing that hurt me the more was leaving my “Ninos preciosos”, my beautiful children.

One day after I got my paycheck I went to the airport and I bought a plane ticket to San Jose, California where my nephews, sons of my sister lived. After I bought the tickets I had 20 dollars left and I arrived in California with those 20 dollars and nothing more. The only thing I knew how to do is work, do you guys remember my dad and his honesty? I had the same energy that my mom had when she decided that she wanted to give me a better future and I started over.

I knew how to drive, and without speaking any English I started driving, “No se como me aprendí los nombres de las calles”,I don’t know how I learned the street names. The freeway was pretty scary at first when you don’t know which way is north, south, west, and east, my coworkers didn’t help, but I saved every cent, every check.

I had a boss that made fun of me because I was a person of age, but that negative energy helped me to save every cent I could. I would reuse the same coffee cup for up to 4 months, if you bought a new cup of coffee it was $2.50 and if you took you own cup it was only 99 cents and with what I saved I could buy a piece of sweet bread and many times that was the only thing I ate all day.

I was sad because I could not send money to my children, but I had a goal to obtain my own place to live, so I bought my own motorhome and I had my own house! It was a rolling home but it was my home, my space. In a gas station I met a girl who I told that I was tired of being alone and if she didn’t have a “tia”, aunt, that wanted to be with a handsome and hardworking man like me. And she said yes! She said, “Tengo una tia se llama Maribel” I have an aunt her name is Maribel. She set up a secret date.

She was my girlfriend and once in a while she let me shower in her house, she supported me, she married me, I was able to get my truck driver license, and I continued to save as much money as I could. Thanks to what my parents taught me, I saved enough to buy my own trailer and once again I was my own boss. I went from getting paid $5.50 an hour in the cold Virginia to making $100+ an hour being my own boss!

My life today is much more relaxed, “gracias a Dios”, thanks to God. I did things right, 10 years of my life here were really hard. I had to work, adapt to the environment and the different ways this society is structured. My economic status also improved a lot, it made me more relaxed and that has improved my mental health a lot.

I’m not stressed like I was when I first got here, I don’t have to worry about what I’m going to eat or where I’m going to sleep and that makes me really happy. One thing that would make me happier is for me to own a house for myself. If I never came to the US, my life in Mexico would be really hard, I would probably be working as a bus driver and being a bus driver in Mexico is really hard. I would have to drive for 26, 36, or 48 continuous hours.

I’m also thankful that I met someone that helped me get my papers, my residency, and my citizenship. Getting my papers meant that I could help any of my family members from Mexico get their papers too. My daughter Maria Isabel decided to move to the US with her two kids and I helped her get residency and just a couple of weeks ago her and her two kids became citizens and I’m really thankful to God for that.

This story is based on an interview by his grandson Roy Diaz, a student at Eastside College Prep.