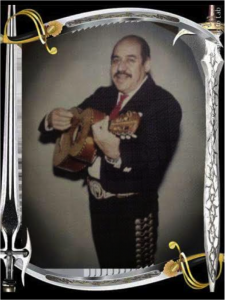 My grandfather, Jose Antonio Prado, is a chubby guy who is about 5’6″, has a grey mustache and has no hair on top – just a little bit around his head. Every morning when he can, he wakes up and he comes with me and my cousin to a bus stop and he gets off at the same bus stop where me and my cousin get off at to go to school, because he likes to go to a bread store that is close by.

He always likes to listen to Spanish music and writes the lyrics down to memorize them. He loves to use his guitars at home. He either sleeps in sometimes or goes outside to stare at the people walking by; goes to work or he walks to places he knows – like a friend’s house or to visit family. He hasn’t driven his car for four or three months, because he can’t see from his left eye.

Every morning when he wakes up he puts on cologne then he sprays his room with air Fabreze. Everyday when he goes to work he takes his fancy shiny boots and his little hat that people who would work in ranches usually wear. He has about 5 or 6 of those hats, and he has kept a special hat that used to be his mother’s, even though he never uses it. He always keeps it in his room.

My grandfather and his family lived in Michoacan, Mexico. They were kinda poor and he lived with his sister, step daughter, and mother. He has eleven brothers and about 9 sisters. He loved living on his ranch with his family and different types of animals like horses, pigs, chickens, etc. When he was younger, and still lived in Mexico he also used to play his guitar and now that is his job – to go with his friends and play music for people that have parties. He learned how to play the guitar himself. Nobody else taught him.

When he decided to leave Mexico, he was 24 and he decided to leave because he wanted to be able to make better music, to have his own small mariachi group and also because he had family here in the US. My grandpa went with his oldest daughter alone through the border first in a car then they had to walk the rest, and it took about a week to cross the border. What they ate while they had to cross the border were tacos and soda.

When they first arrived to the US they were happy, and excited. Their first home was in Redwood City on Chestnut Street. On their first day in the US a couple guys went by their apartment and stole some of their things but they barely had anything except for a small TV some of their clothes and some cash.When they were robbed nobody was at home, but they realized they were robbed because things were out of place like the TV was moved from the top drawer to the floor and because their front door was unlocked and kinda opened.

The first person that left from Mexico was my grandmother with other people then my grandfather and they later on met up with her and their daughter in Redwood City. My grandparents got married in 1985 here in the US. Now my grandparents live with my mom, little sister, auntie, uncle, my four cousins, and me. My grandma takes care of me, my four cousins, little sister, and my little nephew. My grandpa still works as a Mariachi and he has been a Mariachi his whole life even before I was born. His hopes for the future is to have great grandchildren and also for his family to be happy and together in the future.

This story was written by Savina, a 9th grader in Redwood City.