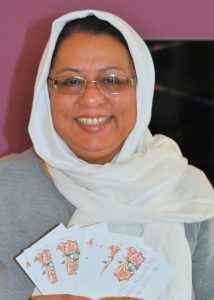 When she immigrated from Pakistan, Siddique initially come to Michigan to support her husband who was pursuing his master’s in electrical engineering. Later, she was able to become a medical technician at the former Lexington Brothers Hospital in San Jose, California. Working as a medical technician allowed her to find her passion of helping others and to improve the community around her.

Since then, she has volunteered for faith and interfaith organizations for decades. Siddique has become a leader of a local Muslim organization, served on the board of several non-profits, labor council, and as a commissioner of the Santa Clara County Human Rights Commission for 8 years. Sabuhi is also politically engaged. She ran for the District Nine seat on the San Jose City Council in 2018, visited jails as a commissioner, and joined others to address police brutality, human rights violations, homelessness.

When holding these types of positions, someone would need to have a fierce character to fight for what they want and what they believe in. But if someone were ever to meet Sabuhi, they would be surprised of how kind and gentle she is. Sabuhi’s voice was filled with confidence and thoughtfulness which made the surrounding environment as calm as a koi pond. Above all, Sabuhi is one of the most selfless souls, because she will always be there to help the little guy and keep supporting them throughout their growth. Santa Clara County is very fortunate to have such an intelligent, selfless and thoughtful woman on their side.

Sabuhi also has many hobbies which loves to share with family and members of the community. Sabuhi loves wearing cultural dresses because they show absolute beauty in the most subtle way, and she hopes to collect many more in the future. While wearing her dress, she enjoys pairing it up with jewelry which includes earrings and a nose piercing. Another hobby that she has picked up in her free time is experimenting with food from different parts of the world. During the pandemic she was able to show off this hobby even more because that’s when her whole family was together, and her family agrees that every meal she makes is made with passion and absolute love.

Besides her work in the county, family and in the larger community, she has also supported her husband in his business endeavors, such as his mortgage company. Between their hard work, they have been able to retire early and help their children achieve their own professional goals. These goals were accomplished through their perseverance, courage, and work ethic, but to complete these goals, challenges were also present on their pathways. When the Siddique’s came to the United States, they faced an early economic recession, but they had enough savings and continued to thrive financially. She was able to learn budgeting skills, back in Pakistan and to further develop them here in the United States. Sabuhi transferred these skills to her children. Another challenge that the Siddique family faced was the fear and discrimination during the 1991 war on Iraq, and especially, after 9/11. During that time, Siddique was always cautious about her movement and her traditional attire that includes a scarf.

Since coming to the United States, Siddique observed integration of the mainstream American culture within her family. She is also a mother of four, who have all been successful and well-integrated in Silicon Valley. She had challenges when raising her children and teaching them the values of both Pakistani and American culture. She knew that her children would be accustomed to the Western culture more because they were immersed into it daily. To this day, her children are still close to their Pakistani culture, but they feel more American at the end of the day.

Siddique believes that immigrants should learn hands-on skills early-on, like plumbing and electrical maintenance as they are practical. Some skills she wants to teach others, are to help stay-at-home moms learn how to sew, cook, and bake. She hopes that this type of work could help ease the stress of being a mother and allow these mothers to follow their personal endeavors with there being less struggle at home. These skills have also helped her, and her family stay stable during the pandemic. She believes that the pandemic increased family unity in her household and brought them closer to God.

Some future policies that she would love to see in the county include giving immigrants the resources to learn hands-on skills for possible intermediate-level jobs. She also wants law enforcement to have more training on how to approach people of different races, ethnicities, and cultures. Their attitude makes people of color fearful and distrustful, instead of making everyone safer in their own community.

Siddique’s immigration story is one of many that describe success, dedication and commitment. It is truly inspiring to many. In this world there is not as much compassion or empathy as there should be for our fellow humans that is why it is important to “help one another, be nice, show compassion and necessary respect” and “to always love your neighbors”. Siddique’s story is hope displayed in its highest glory that will inspire future and present immigrants of the United States.

The interview and narrative were done by Juan Coronado.