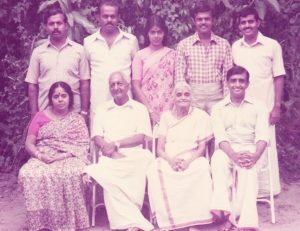 Achan, We Seven with Achan and Amma

I came to the US from India in 1969. I was born in pre-independent colonial, British India during WW II and was educated as a doctor. I  served in  the Indian Army before leaving the country. I was looking  for higher education,  better opportunities, and to earn the American Dream.  I landed in Washington, DC, moved to CT for a year, and settled in Houston, TX 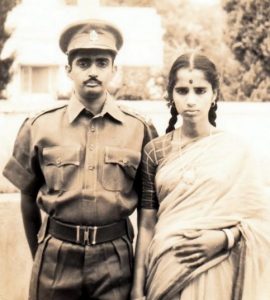 I came as an MD, then trained and certified as a Pediatrician and an Allergy and Immunology specialist. I entered private practice in a nationally reputable clinic, becoming its part owner and serving as its President for 8 years before retiring.

Initially it was hard work, spending 2-3 days at the hospital at a time during training, at times being frowned upon – being a ‘foreigner’ with an accent – but gradually getting accepted and embraced.

Now after a long career, we are retired in Pearland, Texas, a suburb of Houston. All of my three children have a college education with graduate degrees and they are excelling in life, married and with children. 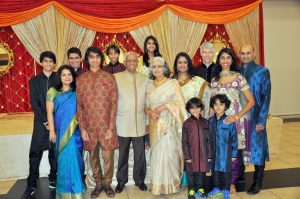 I have written a memoir available at https://www.amazon.com/My-Mother-Called-Unni-Migration/dp/1478761717

Here is an excerpt:

Whenever I am in India, almost on a daily basis, I make it a point to visit my sister Ammini who
lives about a mile away from my home. I often choose to walk the distance. Not only does it give me
an opportunity to feel one with the surroundings, the effort offers me a perspective analysis of the
enormous transformation that my hometown has gone through. The walk often carries me through
seven decades in time, from the placid and rustic memories of the past to the raucous and boisterous
cacophony of modernity. The idyllic village atmosphere that has been preciously protected in the
crevices of my mind often gets disturbed competing with the present, harsh reality of clusters of
concrete monuments, blaring noise, and choking smoke. As the speeding buses and honking autos race
by me, I succeed in escaping into my own, old imaginary settings of the green expanse of luscious
paddy fields and clayish walking bunds that divided them. Stacks of ugly cement tenements and
shacks selling commodities have replaced the acres of coconut palms, bushy trees, and vegetable
gardens. The scattered homes and occasional huts vanished to accommodate the skyscrapers and
massive industrial complexes. Only the sky has remained the same. I search in vain for my familiar
puddles, mounds of pebbles, and routine ditches that used to be signposts along my path from my
father’s home to that of my mother.

The single rail line that used to drag an occasional train has been multiplied several times
hauling a variety of electric coaches to numerous destinations. A double-lane bridge built overhead
the railroad tracks has made it convenient for vehicles and pedestrians to cross without watching the
trains. The handful of hikers who frequented the narrow sandy walkways has politely disappeared,
now that many thousands of humans can speed across finding their destinations in a hurry. The
sprawling metropolis has mercilessly bulldozed the once upon a polite and placid land of mine to
accommodate the growing needs of the faceless, soulless crowd and mutilated the sanctity of the place.

The landscapes have no semblance of the past, but I still sense the bachelor shopkeeper Raman
standing at his front door and watching the street, the barber Kuttan agreeing to report soon for my
father’s haircut, or the graceful, Mettakkat Mathamma greeting me with her charming smile. I still
shudder as I walk through the old vicinity of the house of Ramakrishna Pillai, a gregarious old man
with his long white beard and big belly that, many years later, Santa Claus reminded me of. One of his
sons along with friends was arrested and put in jail for seven years for raping two nuns, the story
making a huge scandal and totally shaming the respectable family. Ramakrishna Pillai never came
out of the house again. As I walk over the high bridge, I think of the tall Tresa teacher and all her
lanky family members who lived in a house on the side of the perpetual puddle (we called it valiya
vellam, or big water). When it rained, the puddle swelled deep and we could not walk through without
wetting our clothes.

That very life has proved to be a fascinating observation, a long journey. How and where it
started and where it has landed, waiting for the finale is intriguing, but essentially the course it has
taken and the experience it has endured credit this narration. Life is the balancing act of the three T’s-
the Tools, the Team and the Time: logistics between one’s DNA and the modifiers being the tools, the
family and the rest of the people you deal with forming the team, and how much time is allotted to live
it out, the time. Every such individual identity relates to its cosmic extension and finds a legitimate
place in the broader sense of existence.

That remains the walk of my life; an experience that takes me from my childhood to old age,
from antiquity to modernity, from past to the present, from memories to reality.