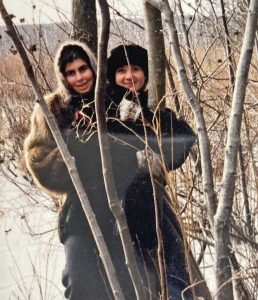 Life in Soviet Russia was not easy but they didn’t know how to live any other way. Everybody lived very simply; there was not much food to go around, clothing was all the same, nobody had excess clothing, and they lived in small apartments. After the fall of the Soviet Union, life became very difficult because food disappeared from stores, the currency was completely devalued, and there was hyperinflation which was a very scary time for Russians. They would go to the grocery store and it would be practically empty. After a while, the economy evened out and things got better. In the 1990s, life became better, food began to appear in stores again, and Moscow was being modernized.

The last 3 years before she moved to America, she worked at a very prestigious job as an equity analyst in a Western investment bank. She earned good money and she was able to live a pretty comfortable life as a young professional woman. Then, in 1998, the world, especially Russia, plunged into a financial crisis. She had no job prospects during this time after the banks shut down. She realized this was the right time to move away and get a degree in business to find more options than Moscow could offer her at the time. She got into Ross Business School at the University of Michigan on her own with no help from advisors or her parents and moved to America in 1999.

In some respects, it was simple and in some respects, it was difficult. It was easy because she received a student visa but it became difficult when she finished business school and tried to get a work visa (H1B). For several different reasons, her visa was delayed and then September 11, 2001 happened. At that moment, she was in Russia waiting for her work visa to get issued. She wasn’t sure if she would ever be able to re-enter America. At that time, she was engaged to my dad and had job opportunities lined up so it was very stressful to wait for the unknown.

The first few years my mom was here, she knew nothing about American culture or life. She didn’t know what a queen sized bed was or a bagel or flavored coffee. It was a completely different kind of life than she was used to. She didn’t understand why people would greet each other and then leave. Everything was new and required getting used to, including to the food, measurements, the temperature, and the people. She found people were friendly but shallow. On the other hand, Russians were unfriendly but deep. Life here was much easier, comfortable, and perfunctory.

She was shocked when she came here, how friendly everyone was. In Russia, there weren’t a lot of immigrants but when there were immigrants, they were treated with distrust and made of their accents. She was convinced that everyone in America would laugh at her accent, but she was pleasantly surprised that no one did. No one made fun of her for being Russian or being an immigrant.

When she started going back to Russia just to visit, she started to notice things that surprised her. She realized how rude everyone was, in restaurants, in grocery stores, and she had already gotten used to the opposite. She also noticed how nobody smiled in public which was a contrast to Americans who always smiled at strangers. Everything seemed inefficient and took a much longer time than simple tasks in America. Life had still remained difficult even after she moved away.

Unfortunately, Russia has turned into a country where no one really wants to live. People only want to leave Russia because of the sanctions and the Ukrainian war. Russia could have a lot of potential but with the current leadership, it’s not possible. She has no regrets coming to the US and she’s extremely grateful for the opportunities she received in America, and the life she’s built for herself.

Be bold, embrace opportunities, there’s a lot to learn, and most importantly, not to second guess yourself. She recalls second guessing herself a lot because of her accent and her worries that Americans would make fun of her for it. America is an amazing place of opportunity for courageous people, if you’re willing to take the risk.

She has never seen America more divided than it is now, politically, ethnically, and racially. It has never been this extreme. She feels like people have become extremely intolerant of each other and incapable of having an intelligent public political discourse. Everything was under a facade of political correctness and kindness. Now, it’s ugly and divided. It’s very upsetting to see the direction the country is going.

She is proud that she came from practically nothing and built her life because of the opportunities that America offered her. She feels that she is a positive representation of the American dream.

After interviewing my mom, I realized how lucky I am to be born into such an opportunistic and prosperous life in America. I realize how much I take for granted including the large variety of food, clothing, education opportunities, etc. It’s easy to take these things for granted when we think about all the negative parts of our lives, but I need to remember how privileged I am and how I should count my blessings every day, even if I’m not always reminded of them.

The interview and narrative were done by Elizabeth Wolf