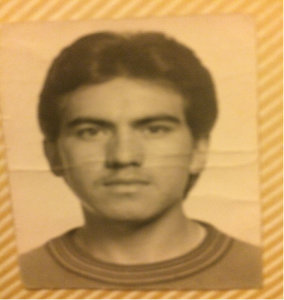 Juan Islas’s last picture in high school Juan Islas with his cousin Manuel in
before migrating to the U.S.

1. How old were you when you first thought of crossing over?
A: I was 15 years old and still in high school. I had heard stories about other people having success “up north”. I wanted to explore the United States and see what could be out there for me.

2. When did you actually make the decision of crossing over?
A: I was about a year and a half away from finishing high school. I was living in Epazoyucan, Pachuca, in the State of Hidalgo, Mexico. It was in the year 1982, I felt that I could make a decent living by working in California. I knew deep inside that my future did not revolve around academia. I remember how I just spent my middle school years shining shoes on the plaza after school for food money. I thought that if I worked harder I could actually have a better life. The opportunities in Mexico were limited and I had known of the United States to be a place of freedom.

3. How was your journey migrating to the US?
A: Believe it or not, the first time I crossed the US-Mexico border outside the city of San Diego, the “border” was only an ordinary chain linked fence. There was no border patrol or check point nearby. I crossed that day with my cousin Manuel who was 14 years old at the moment. All we did was hike up the fence and jump over in a single swift movement. Later I recalled seeing actual burrows underneath the fence so all you had to do was lift up the fence and get underneath. I also remember seeing fences with holes cut through them so all you had to do was basically walk through the hole. At this point we had already been working in Tijuana as mechanics for a while. We had been learning how to operate machinery like different cars, dump trucks, gardening, and construction tools of the sort.

4. So would you say it was an overall difficult experience?
A: Not at all, like I mentioned, the border was not as secured as it is today. That day we only crossed because we wanted to see all the excitement going on across the border at SeaWorld. Ultimately my cousin and I were just two curious teenage boys.

5.When you first arrived, did you arrive and have somewhere to stay, sleep, or work?
Yes, the man that had been teaching us things in Tijuana was able to get us jobs with some other man in San Diego. We didn’t have anywhere to sleep so we would just cross the border every day back and forth between Tijuana and San Diego to get to work.

6. When did you decide to officially settle in the US (YEAR/PLACE)?
Once we finally had saved enough money to pay for rent in the U.S. we thought of saving on the costs of traveling back and forth across the border every day. The year was 1985 and I found a place to stay in the city of Compton, CA.

7. How was it? Did you get a place of your own right away or did you have to live with other people?
It was pretty doable, a shared house with several other guys with similar backgrounds. We would all work during the days and only come home to sleep. The city was dangerous because it had a high crime rate and there were always racial tensions going on. I tried my best to just lay low and have a good time; working and exploring new places in my free time. 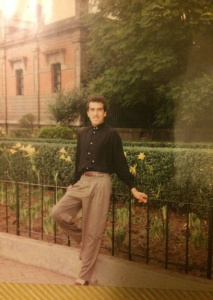 8.Did you decide to go to school or get a job when you decided to settle in the US?
No, there was no option to go to school. Having dropped out of school in Mexico, I knew I was here to work and that’s all I wanted to do. The U.S. had so much to offer, and yet the only way I could acquire anything was by working.

9.Did you ever get the privilege of becoming a US citizen, if so how and when?
No, sadly I have not finished my citizenship process yet. After becoming a lawful permanent resident under President Ronald Reagan’s amnesty program in 1986, I was later deterred from acquiring full citizenship because of recent [at the time] court cases that I had pending. The court cases were non criminal and involved incidents with me helping people cross the [U.S.-Mexico] border.

10. Would you say you inspired other people from your community in Mexico to do the same as you? Pursue the American dream?
Yes, actually I literally became the driving force behind several of the people in my town who eventually immigrated into the U.S. 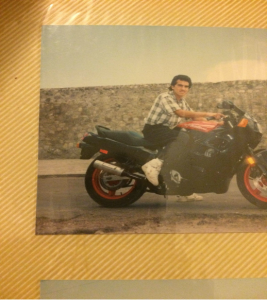 Juan Islas in his hometown in Mexico

I never crossed people over the border for hire, I crossed people over the border because that’s what a good friend should do; help the pueblo. After I met my soon to be wife in the United States, I also helped cross some of her siblings, nieces, and nephews from their home state of Durango, Mexico. Most of my friends that I helped to cross the border eventually returned home after making some money in the United States. Most of my wife’s family stayed in the U.S.and went on to live happy lives.

This interview was conducted by Jennifer Jacovo, a student at Foothill College in Los Altos Hills, CA.