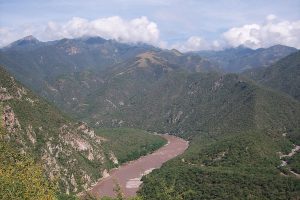 As life presents itself as an endless cycle of the same thing everyday, some people will take any opportunity to make a change. My mother Maria Hernandez was born in Nayarit, Mexico in a small fishing ranch, right next to the Rio Grande de Santiago. Being the eldest of five children, Maria spent her time going to highschool and cooking and preparing food for her family. Maria would always make sure her siblings were getting enough to eat because a large amount of malnourishment took place in her state. Maria recalls enjoying living near the water as it taught her so much about life. “Living near water helped me understand that life is always in motion so you should always take your time when proceeding with your life, because you only get so many chances that can change your life forever.”

After graduating from high school Maria wanted to pursue higher education, but her dreams of education had to be cut short because of the high cost to attend universities in Mexico. Instead, Maria got a job at a taqueria in the capital of Nayarit, Tepic Mexico. Living with her aunt to help her support her cousin’s orphaned children, Maria spent her late teens caring for her nieces by day and working at the taqueria by night. Maria always knew she did not want to live in Mexico her whole life because during her eighteen years living there nothing had changed.

Maria was living in this cycle for about four years, then one fateful afternoon before heading to work, one of Maria’s nieces gave her an envelope that she found in the mail. The envelope was addressed to her and contained a letter from her cousin who lived in America. Her cousin’s letter asked her about how she was, and if she was willing to get flown out to America to stay with him and his wife. Maria contemplated immigrating for weeks. With her aunt getting very old and nearing her time to go, and her nieces becoming independent young women, my mother was at a crossroad with this choice. Maria did not know a lot about America or how to make a living on her own because she had been with family all her life. But Maria knew she had to make like a river and stay in motion. Her aunt passed away a few days before Maria left for America. Her nieces were old enough to get jobs of their own and support each other in Mexico so the timing worked out well.

Maria traveled to America by plane, where she landed in San Francisco, California and was met by her cousin and his wife. Maria recalls the skies being bright blue just like the Rio Grande from home, which comforted her through her transition to a new land. Maria stayed with her cousin and worked at another taqueria, but this one was owned by her cousin. Maria loved America because of the odd landscapes and the stores that were not available in Mexico. She also liked not having to learn English because she worked with family.

Maria continues to live in America and has stayed here for twenty five years. She has never had a doubt in her mind that she made the right decision. Maria will never forget Mexico and its life lessons, but she will always love America for being the only opportunity that helped her break her cycle that seemed endless.