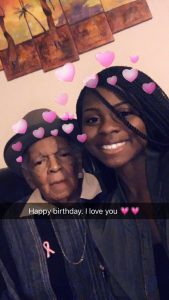 This picture was taken on his most recent birthday.

In the horrible streets of Bay Minette, Alabama, where the air was dirty and full of racism, I, George Thomas was born on December 21st, 1938. I lived there for 33 years with my grandmother who helped me through everything. I wanted to leave to escape from all the chaos, to find new things, and to travel but through my journey, there were very hard obstacles that I had to face. “It was just horrible.”

I stayed in Bay Minette, Alabama from 1938 to 1964. I stayed there with my grandmother who took me in because my mother lived in Chicago at the time. My mother wasn’t able to take care of me the way she wanted so she sent me to my grandma. I moved around a lot from Mobile, Alabama to Mississippi to Florida and then I settled with my grandma in Alabama. For the most part my life as a child was great. I had fun times with my childhood friends. (laughs) “Haha, you have no idea how crazy we were.” I remember when we were about 10 years old, we went down to the lake and would play in the water and when we would come back, we would just be all wet and get in big trouble. My grandma would hit me because when I got back home, I would sit on her good couch, all wet.  But you know, that was when life was fun and amusing.

Life was great until I started growing up and realizing that at the time, my hometown was suffering and going through hard times. We had the KKK circling around us, the police killing us, and the racists hating us. I just feel terrible about everything. I didn’t know what to do anymore. We boycotted the buses because they wouldn’t let us sit where we wanted to sit. At this time, racism was huge. They would simply shoot us because of the color of our skin. Made me feel horrible, like I wasn’t a person. Like I didn’t belong in my own hometown. Like the hometown that I once knew wasn’t there anymore.

I didn’t want to leave. I loved my hometown despite all the chaos it came with, but something tragic happened that was the final straw. Now when I say the KKK were everywhere, I mean THEY WERE EVERYWHERE. The confederate veterans with their all white on and pointed hats sucked us in. It was like the air was filled with them. All I consumed was KKK. I couldn’t breathe! I needed to get out of there. Now at this time I was around 32 years old when the KKK and everything they stood for came for my me-ma (grandmother). My me-ma was a beautiful woman. She cared for any and everybody. One thing she didn’t do was put up with the bullshit. I loved that about her. They came for her anyway. They killed her. I was hurt. No; I was mad. I was filled with so much anger. Why take the only person that cares for me? Everything inside of my body ached. Pain rushed through my blood. My soul… What soul? (sits and thinks) She meant everything to me and in an instant she was gone. BOOM! Her ashes fly away. (sits in silence) I knew then that I had to leave.

I wanted to travel to California because of what they did to my me-ma and I knew that if I didn’t get out, then they would have gotten me too. I also heard that California was great and had great opportunities.  I drove those 2,160.5 miles from my homeland all the way to California. I was stopped by the police for no damn reason, I tell you! No reason at all! I felt like I wasn’t a person, like I had no right to live. I wanted to die and give up at that moment in time. I couldn’t handle all the hatred and the loss of love that I had once known when I was a child in my hometown. I missed that love and warmth that I had once felt in my heart. I wanted it back. I needed it back so bad that I couldn’t just give up. I had to keep going on my ride to California. I thought “there has to be more experiences and more love and opportunities for me.” So I kept going until I arrived in East Palo Alto, California.

When I got to East Palo Alto, California, I had a lot of help when I first arrived. I had long lost family and friends that I soon found again. They provided me with a place to stay, eat, and take a shower and that’s all I needed. Now, I’m not going to say the racism was gone when I got out there but at least I had more family to help me through the long suffering nights full of tears. The only thing that was unfortunate was that when I got to EPA there were no jobs open for someone like me. When I say someone like me I mean because I was a negro. At the time no one wanted a negro man working for them because they were mad because we worked better and smarter than them. They didn’t want us on top and never will. They love to see us fall and fight each other.

But I made sure when I got out there that it would be none of that. I had lost too many people in my life from doing that. At first it was a struggle making a living for myself but then a job at Stanford opened up for me and I took it with much pride. As I was working there I would get stared at a lot because of the black on my skin. It made me feel like I wasn’t good enough but I knew that if I wanted to keep this job then I had to let it go for a while. I mean, what can I say? “It payed well so I had to stay.” I had to provide for my beautiful family.

Today in 2018, my life is truly amazing. I am healthy with a wife who sadly passed away, with 4 kids and 8 grandchildren. I would have never met the love of my life if I hadn’t moved from my homeland. I worked at Stanford for most of my life and recently retired. Although the journey was rough, I’m glad I made it through because I don’t know where I would be if I hadn’t gone through what I had to go through.

The transcript of George Thomas telling his story was written by his granddaughter, Terrionna Reed, a student at Eastside College Preparatory School.