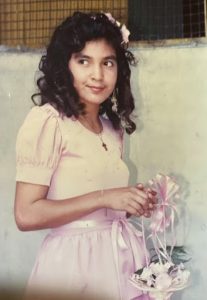 I was born and raised in El Salvador in a small pueblo in Guarnecia. It was a beautiful and peaceful country of coexistence and with lots of things to do. I lived in an ugly, baby blue, two-story house surrounded by many refreshing lakes and fruitful trees. The lakes were our only source of water from which we washed and bathed. The hammock that hung on two trees where my tired grandpa slept all afternoon, exhausted,  after work.

The strong aroma came from the kitchen where my mom and grandma cooked their pupusas, yuca, plantain, and other delicious goods. This kitchen was where my mom and grandma made money. The place where I began to work at the age of 10. My mom would send me to get food from the tiendita. I would skip to the store with my white floral dress with my brown chanclas. I bought some eggs with the few cents my mother gave me. I held it in my hand like the rarest gem in the world. On my way back home I tripped and scraped my knee. My eyes widened, an egg broke.

Awaiting for the harshest punishment on my way home, I got back up and cried my way home. I lived with strict parents. They were mostly strict about wasting food, breaking an egg or dropping a single drop of milk would get you a beating. Although I saw this form of discipline as arbitrary, it taught me a great moral not to take things for granted, and not to waste when you have nothing. As poor as we were, our government system was rateros, rats. They stripped us of any money which led our country to poverty. They stole money from funds that they received that were supposed to help with necessities for us. But all hope wasn’t lost. I had my brother and my family.

I attended school with my navy blue and white uniform and my two pigtail braids. I spent time with my friends both girls and boys. My brother and I spent time together in school. As the baby sister, I was, he was protective of me. I was well known for being good at sports in school. Soccer, basketball, you name it! But most of all, my brother was good at basketball, he kept getting taller.

He was unique because he wasn’t like all the other boys in my society. He’s like the square in a circle society. He wasn’t like a classic Prince-like character in the fairytales but like the princess of the story. He likes dresses, the color pink, Barbie dolls, and princesses. As he got older, he came out. My family was super supportive of his decision. People in my society didn’t criticize him for his choice because everyone adored his personality and all the jokes he would tell.

On my way toward and back to and from school, I would climb the fruit trees like a monkey. I would pick up oranges, guineos, and apricots. There were plenty of fruit trees along with other agriculture, along with cattle, horses, pigs, chickens and so much more. The roosters chimed along with the church bells every morning. It was like our alarm that would wake us up. Eventually, time passed, and I graduated high school. I vividly remember my last moments with my classmates in the classroom, we wore black pants and shirts as white as a blank slate. Soon enough, those shirts would get signed by everyone in the class.

After high school, I wanted to attend college and become a lawyer. I wanted to be rich in order to support my family and form a family of my own. Unfortunately, we didn’t have that kind of money, so I had to give up on that dream and find another opportunity to work. When it came to my twenties, I received the opportunity of my life. I was going to be sent to the United States. My mom had paid a coyote to transport me to the States. It was around July of 2001 when I was going to leave my family.

I wept hard and long with my family, I was scared and saddened to leave them behind. I said my final goodbyes and followed the coyote. I took a last glimpse of Guarnecia and kept weeping. Along this journey, I was afraid because I didn’t know where we were heading, and I didn’t know what could happen along the path. I kept wondering how my family was doing and wished that I could take them along with me, I couldn’t bring anything. At one point, I got detained in Mexico, but later was released because the Coyote paid for the release. After a long month of this long journey, I had finally made it to the United States. I landed in New York. My family waited for me and welcomed me with open arms. I was in awe, the beautiful tall buildings I’ve never seen before, the glistening lights that lightened the streets like a Christmas tree. No words could describe the beauty and cold air of this city. I was mesmerized.

My family took me to a McDonald’s, to which I ordered a Big Breakfast along with a coffee. As the days went on, I had the opportunity to visit many tourist places such as the twin towers, central park, and the statue of liberty. I even tried new foods such as my all-time favorite, Dominican food: Rice with Mangu and rice with Habichuela. Unfortunately, a month after my arrival, the twin towers were destroyed. Although, I was fortunate to have seen the towers before they turned into ruins. It was very sad to see family members weeping in front of what were now ashes.

After moving in with my uncle, he has been my caretaker who provided me with food, clothes, and a home to stay in. I stayed in his small apartment. Eventually, I began to work as a babysitter. I became friends with a man from Mexico, who lived with my uncle. After some time living in New York, I had the opportunity to work in a huge city, but most of all, I struggled with English. It was like another planet, although it was still a beautiful language and country to be a part of.  Above all, my goal in life is to form a family and have better opportunities for my children and their children and their great-grandchildren to be successful in life, in hopes of gaining the best education possible.

In 2003, it’s been two years since I last arrived here in New York. I gave birth to my first beautiful daughter on January 23, 2003, in the Bronx, New York. I had not heard from her father in 9 months nor have I bothered to contact an irrelevant puzzle piece of my daughter’s life. Moreover, my daughter’s name was unique which stood out among crowds. It was a name from the Caribbean islands, from the Dominican Republic.  A name that doesn’t exist. A name of a sweet tropical scent, a name as bright as the sun. A name that means yellow coconut. The name…Yamaira.

It has been about a year since my daughter was born. She is big now, with her skin as white as snow and her eyes as green as an emerald. I received the most delighted news from my family. My mom, dad, and brother came to the United States. They arrived in a state called California. I immediately jumped out of glee. I gathered the money that I’ve earned from my babysitting job in order to buy a ticket for my daughter and me. Eventually, the day of dispatch had finally arrived, I said my final goodbyes to my family in New York, in hopes of someday visiting the city again. After the five-hour flight, I finally arrived in San Francisco. I had my parents pick me up. I hugged my family with tears in my eyes. I also introduced them to my daughter, to which they were delighted to see. Along the car ride, I got to see how big and expansive California was. Unlike New York, it wasn’t as crowded, nor were the buildings touching the clouds.

I moved in with my parents in an apartment. It wasn’t too small nor too big. I shared a bedroom with my daughter. This was the house where my daughter grew up. At the same time, it was the place where I met my significant other. It was somewhere between 2004 and 2005. I met my husband at a party that my family threw. My husband was invited because his sister was neighbors with my mom.

In 2005, I gave birth to my second beautiful daughter. Her father came up with a name. A name that shined as bright as a star. A name that speaks sweet and diligent. A name that can be changed like a chameleon. A name that means white wave and fair one. The name…Jennifer.

Above all, I live happily in the United States with my family. Especially, since I live close to my mom and dad, and brother. Although, I hope to be reunited with my family in El Salvador. Most of all, family is what motivates us to seize opportunities and make sacrifices. Living here became the norm, the place where I built my empire, my place where I call home.