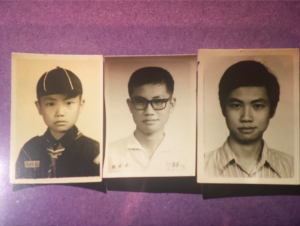 From left to right: Kuo yen in elementary school, middle school, and college in Taiwan.

From that day on, he told himself that if he couldn’t fly aircraft, he could at least make one.

The number 8 in Chinese culture has always been a prized symbol, with its pronunciation sounding similar to prosperity and good fortune.  My father was born on August 8th, 1958, and throughout his childhood, he was always told he was lucky because of his birthdate. This seemed a stark contrast to the bleak situation during the time. Reflecting back on his life so far, he agreed that he has been very lucky.

Born in the South West city of Tainan, Taiwan, Kuo-Yen Chang was the first child of a Taiwanese military Colonel, who served in the Second Sino-Japanese War and the Chinese Civil War before traveling with Chiang Kai Shek to Taiwan in 1949. The Changs lived a very frugal life around the time Kuo-Yen was born; due to the tight restrictions emplaced during the dictatorship of Chiang, they always were tight on money. Kuo-Yen’s mother opened a small family restaurant to support them in addition to her husband’s service. Despite this, Kuo-Yen and his three siblings always made the best of everything and had a happy childhood. “We would always go to the local park at dusk and play different games.”

As Kuo-Yen grew up, he always aspired to become an air-force pilot and to fly a F-86 Sabre in the Nationalist Army. However, due to his poor eyesight, he was informed that he couldn’t become one. From that day on, he told himself that if he couldn’t fly aircraft, he could at least make one, and so he dreamed to become a aeronautical engineer designing military aircraft. During his school years, he worked extremely hard studying math and physics with hopes of transferring to an  American school as an international student to obtain a degree.

His hard work paid off when he was conscripted into the Taiwanese military for a mandatory two year service. He was allowed to become a math and physics instructor, teaching other conscripts instead of becoming a regular soldier. Kuo-Yen then went on to complete a four year degree at National Cheng Kung University, before transferring to America as an international student, fulfilling the first half of his dream. “I remember after a long 14 hour flight, when I first landed in the U.S. while going through US Customs, the customs agent asked why I came to the US. I replied that I was studying here. He then asked which school I was attending and I replied Arizona State University. The Customs Agent then said, “That is a very good school!” and I asked him why he thought so, “Because they are number one in the Big 12 Football league!” I thought it was very interesting that sports was such a big thing in America, I didn’t realize how important it was.”

Kuo-Yen also immediately noticed how different the culture was, “Everyone followed the traffic rules very nicely. It didn’t matter if there were no one at the stop signs, people still stopped and abided to traffic laws unlike Taiwan. For example, if an ambulance truck was trying to get through traffic, people would pull over, whereas Taiwan people usually didn’t. Strangers would also greet me as I walked around. It gave me the impression that the people were very nice and compassionate.”

After graduating from Arizona State University, he moved to Palo Alto after being accepted to graduate school at Stanford University for a Mechanical Engineering degree. It was during this time that money became especially tight, becoming so severe at one point that Kuo-Yen only had $10 left; he had to survive eating from the dollar menu from McDonald’s for a week before a student grant was given to him. “After that experience, I never wanted to see another hamburger in my life.” His fortunes improved after that, being introduced to his future wife at church, to finding a job during school due to a stroke of luck. He eventually became a Mechanical Engineer at BAE systems designing the M2 Bradley IFV, where he works to this day.

Kuo-Yen’s legacy is defined by his hard work, being able to provide a house in Palo Alto and putting food on the table daily, luxuries he wasn’t always able to enjoy in Taiwan fifty years ago. It also serves as an inspiration for his two children, who both recognize and appreciate the dedication he put in raising a family with more opportunities. In addition, he constantly gives his own wisdom for our own struggles, and reminds everyone to be humble. Although Kuo-Yen didn’t become the aircraft engineer that he dreamed of becoming since childhood, he still considers himself very lucky, true to his birthdate.

This story was written by the immigrant’s son, Jacob Chang, a student in Palo Alto High School.