Loyal to my Royal Soil (Tonga) 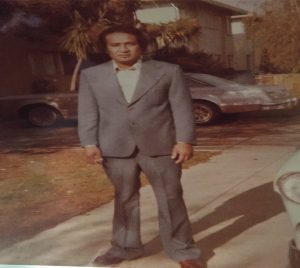 I came from nothing, running from cops handcuffing. I had to make it out so my family could stop suffering. This was the moment I knew I had to search for a better life, a better future, and I found that in America. My name is Siaosi (George) Kuli Vanisi and I grew up on an island in the south Pacific called Vava’u, Tonga. I remember how blue the ocean was and the fresh coconuts that I could climb and pick to have fresh juice everyday. Every morning I woke up to the chirping of birds, the crashing of waves, and the sound of knocking on my door to come out and play. I remember my old horse that I would ride everyday when I would go with my father to pick roots out in the bushes. I loved Tonga. The King and Queen didn’t seem like a King and Queen, they were so loving and kind. They treated us as equals, if not more. I am proud of the small island that I come from. I’m proud to be Tongan.

I knew when I met my wife for the first time I wanted to marry her and start a family. But I needed money to do that.

I heard in America that there was money falling off the trees. There was jobs for everyone. I heard if you wanted a big house and a nice car you could get it in America. I came to America because my lover was pregnant and I wanted to have a better life for my child. I wanted my child to get a good education. Though I managed to make a good lifestyle in Tonga, I wanted my children to not have to worry about their next meal. I didn’t want them living paycheck to paycheck. I wanted their life to be stress free when it came to money.

I took a boat by myself from Vava’u to the main island of Tonga. There were lots of others on the same boat who had the same, if not worse, experience as me. It was horrible, I got very seasick and the boat ride was hours. This boat had turned me against the great blue ocean I had once loved. I had felt that the water was an enemy to me now, making my stomach churn and my head ache. The splashing of the waves made me want to vomit. The salty air smell was disgusting, it almost reminded me of rotten fish. I felt like the Captain was doing it on purpose! I must’ve thought to myself “it’s almost over, IT’S ALMOST OVER” at least 20 times. After what seemed like an endless ride, I got to the airport and took a flight to Hawaii. In my suitcase I had only a few shirts, some socks, two pairs of pants, and a hat.

When I got to America I thought I could get everything and then pay for it after I get a job. That wasn’t the case at all.

After arriving in Hawaii, I thought my ticket was to San Francisco to go stay with my cousin but the ticket was only to Hawaii. I was stranded at the airport for 10 hours so I decided to take a bus to town. I did not know anyone in Hawaii. I slept at a park for 2 days and ate just what I could afford. I was skeptical, “How will I get my life together for my future family?”. I had a couple shirts with me, some socks and a couple of pairs of pants.

Finally, I did find a way to make some money. After finding work, I stayed there for 3 months with a very kind family that let me work for them, cleaning and working on their yard.

Once I saved enough, I bought a ticket and flew to the Bay Area, to San Francisco. Instead of a big house I had to get a small apartment and I had to have money before I moved in. I had three jobs when I first settled in San Francisco. I worked in a pizza place baking pizza, a restaurant as a dishwasher and I cleaned commercial parking lots on graveyard shift.

I am thankful I came to America to get settled because if I had brought my pregnant lover it would have been uncomfortable for her. My family began in America in 1970. I came in 1969 but my daughter was born June 29, 1970 at Stanford Hospital in Palo Alto, Ca.

My cousin had settled in San Mateo with his family and had helped me find an apartment and get my family settled. My wife was a Catholic. Everything she did was for GOD and she made sure I was a witness. I am a true believer because my wife introduced me to GOD.

My children know my journey but I always felt my grandchildren should know my children so I was very happy to do this interview with my grandson.

Now he can tell my journey to his children. I believe that if I didn’t leave Tonga, I would live in the same house my mother died in. However, I do think that I would be enjoying the beach and the amazing blue ocean.

This story was written by Fritz Schaumkel, the grandson of Siaosi Vanisi after an interview.