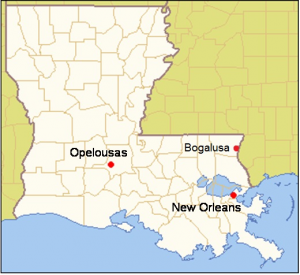 My name is Saundra Stamps. My parents were both born and raised in New Orleans, Louisiana (USA), and I was born in San Mateo, California, but spent most summers in New Orleans.

I was fortunate to grow up in a two-parent household. My father was an entrepreneur and the first African American owner of an upholstery and interior design business in the Bay Area.

I was born in the 60s and vividly remember the assassinations of Martin Luther King, Malcolm X, John F. and Bobby Kennedy. There were a lot of social uprisings, including the Watts riots, Black Panther movement, and Symbionese Liberation army (SLA). Being black during this time period meant it was hard.

I have always lived in the Bay Area. However, my grandparents and parents left New Orleans seeking a better life for their children and grandchildren.  They were both excited and hopeful for a new and better future.  The South was a very racist and prejudiced place to live, with little or no employment, equal housing, or educational opportunities for blacks.

My mom was sent to live with family friends in San Francisco and Menlo Park, CA, and my dad drove from New Orleans to California to find his father. His father had left New Orleans when he was a child to find employment and housing for his family, but never sent for or came back to get them.

My dad saw my mom walking home from school (Menlo Atherton). He introduced himself and they soon fell in love and moved back to New Orleans. Eventually, they saved enough money to move back to California. “Hi my name is Simuel Simon and yours?” “It’s Shirley, nice to meet you Simuel.”

I was very nervous and hesitant at first because this was my first time being married and living away from my family.

Our biggest obstacles were finding an apartment and work because we had to face racism in the Bay Area. EmPorium company gave me a chance as a cashier while my husband went to an upholstery trade school. Our meals consisted of pork chops, red beans, and rice along with vegetables.

First, we rented a room from a church member who lived in East Alto, CA, and later rented a one-bedroom apartment on Willow Road in Menlo Park, CA.

My biggest surprise was learning we had saved enough money to purchase a home and the bank approved us for home loan.

Martin Luther King, Malcolm X, John F. and Bobby Kennedy were assassinated. There were a lot of social problems like the riots in Los Angeles and the Oakland Black Panther Party and the SLA. Police brutality was a real problem.

Great Grandmother: I still live in the home my husband and I purchased over 52 years ago.  My husband passed away in 1997. I was able to retire at age 65 and travel to Paris, France, London, New Zealand, Poland, Switzerland, Puerto Rico, several Caribbean islands, and Fiji, as well as all over the States (something I never thought I would be able to do). My major success was volunteering 70 hours a month to teaching people what the Bible really teaches and I was able to do so for over 10 years. My proudest moments are witnessing the births of my grandchildren and raising 3 self-sufficient children who are law-abiding, loving individuals who take good care of me. My hope for the future is to see all the promises foretold in the Bible come true in my lifetime. My motto is “Never judge a person by their actions until you know their motives.” My biggest life lesson is to always pay yourself first.

This story was written by Saundra Stamps’s grandson, Markhi Simon, a student in the Bay Area.