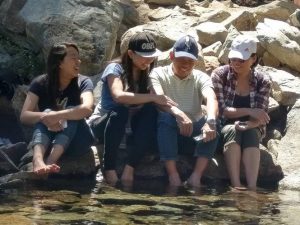 Living, in one of the largest populated cities in Hsinchu, Taiwan, Nancy Wu (name changed) and her husband worked in the high tech industry.  As a project manager, Nancy traveled abroad quite a bit.  She was able to compare some schools in other countries with those in Taiwan and preferred what she perceived as a greater emphasis on critical thinking and extra curricular opportunities in the US and Australia.

In 2005, Nancy and her husband were prepared to emigrate to Australia for the sake of their daughters’ education, but she also filled out paperwork for the US immigration lottery.  There was a pool of 800,000 lottery applicants, but Nancy hit the jackpot. 50,000 applicants were moved to the next step of the process. Nancy had her daughters watching the Disney Channel to get them started with the English language. In January 2007,Nancy and her family received their visas through the Diversity Program with a span of six months to make the move that would change their lives forever.
Nancy and her family arrived in the U.S in March 2007. Once, they entered the U.S their visas immediately turned into green card cards allowing her husband to work. When they first arrived they stayed with a friend in Cupertino, California. Later, they stayed with friends in Almaden.
As Nancy began looking for a home to lease she encountered a problem. In the U.S one must have a high credit score to lease a home. They had a healthy savings account, but they had no credit history. Nancy decided to purchase two cars paying the monthly fees to begin building credit. Her husband was eventually hired at a semiconductor sales office as the account manager. Soon after, they were able to rent a home in the Almaden area.
Eventually, they were able to buy their own home. Her daughters, were going to school and finally everything was falling into place. Nancy and her family felt at home in the Bay Area because of its diversity and the large number of engineers there. She had studied writing and reading English in Taiwan but it took a while to feel comfortable speaking the language. In Almaden, she could get by without speaking English in many situations.

As her oldest daughter went into high school Nancy was a “basketball-mom” and she couldn’t be any prouder. Her younger daughter loved singing so Nancy got her involved in a choir. She has fond memories of her daughter when she was in the Vivace Youth Choir. Now, her daughters are grown and they are following their own career paths as Nancy had hoped.

Nancy is very grateful to have won the lottery and experience a new life in the U.S. She especially appreciates the added leisure time that affords her family great adventures such as skiing, ziplining, and hiking in the beautiful mountains.