Looking to the Future (Germany) 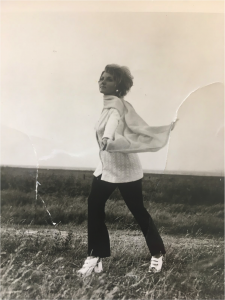 Ralph Waldo Emerson once said, “America is another name for opportunity”.

My grandmother, Marianne Kramer, believed this as well. She is a strong woman who came to America for the purpose of opportunity. She was the first person in my entire family to come to America and make a living here. Life for Marianne in Bremen, Germany was pleasant, she and her family had a happy life. They lived in a small apartment, but it was close to parks and public transportation, so there was plenty to do. About a year before making the decision to move, she gave birth to two children, a boy and a girl; Gerry Jr. and Sonja. Marianne’s husband, Gerry, had a job teaching the languages of German and Russian, which he enjoyed very much. Soon enough my grandpa’s teaching certificate was no longer accepted in Germany, so he lost his job. After his family became aware of this, they invited him, Marianne, and the children to stay with them in Philadelphia, Pennsylvania.

Back in Germany, there were very few job opportunities for Marianne. Being a woman and a mom in Germany in those years was tough because of the country’s recovery from the Holocaust, and America was the land of opportunity. Marianne wanted a job of her own and wanted the same for Gerry. She had always loved America and dreamt of what it would be like to go there. To her, it was the land of freedom and happiness, and it was where her children could grow up and thrive. Not only was an opportunity to expand her children’s education, but hers as well. As a twenty-six-year-old with two kids, ages one, and one and a half, and a working husband, moving countries is a decision that requires a lot of thought. The toughest thing the Kramer family had to do was say goodbye to friends and family, and to their home and their surroundings. Marianne remembers clearly how they had to invite the neighbors to their house and sell all the furniture, toys, and clothes to them. This left them to keep only the important items, such as a handful of clothes, and some basic necessities of which were toothbrushes, hairbrushes, and other hygienic items.

Later, Marianne and her family had to make a decision on which transportation to take. The two options were either ship or plane. They chose plane because taking a multi-day ship ride with two infants would be bad news. Taking a plane appeared to be the obvious choice because it was faster and cheaper. Once they got to the airport and made it through security, they realized their direct flight from Bremen to Philadelphia was canceled. That was the beginning of a series of unfortunate events. The only available flight left within their time range was a connecting flight that first landed in London, then took them to Philadelphia. Not only was this long and painful, but having a one-year-old son who had never been on a plane before was another factor making this the plane ride from hell. Not only did Gerry Jr. continuously scream and cry the entirety of both flights, but he got a rash on his neck and arms.

The workers at airport immigration wanted to put him into quarantine because they thought he brought a disease over, however, there was an alternative way out. They would let him go if Gerry’s parents signed a paper saying that as soon as they arrived at the home, they would see a doctor to find out what caused the rash. Turns out it was from his continuous screaming, and that’s exactly what the doctor wrote on the note of which was to be returned to immigration. Sonja, on the other hand, was overjoyed the entire trip, she entertained herself by running around in the hallway of the airport and climbing under the ropes that were blocking off certain paths.

Besides the retainment of my uncle, which caused Marianne to be very frightened, immigration went fairly smooth. This was because before she even bought tickets to come to America,  she had to do an interview with the American Consulate who was to swear her in, therefore all of the questions were already asked, and her intentions were known. What Marianne remembers most about her journey to America, is the emotional turmoil from being sad, to excited, and then petrified. Her mind was going in hundreds of different directions. From “What is this new world gonna hold for me?”, to “Oh no I don’t want to go”, to “But you have to”. Although she had several different emotions running through her mind, the minute she started settling into Pennsylvania, she did not regret moving.

Philadelphia was the first place they lived in the United States because they were invited to live in a home with Gerry’s parents. The lived out of their suitcases and had sold nearly everything. Before Gerry and Marianne got together, he was in the military. Because of this, Gerry had a loan from them, which would help the happy couple get started living on their own.

Now all they needed were jobs. Shortly after this, Marianne got her first job in the U.S., which was an associate at a German lunchmeat store. This job was perfect in her eyes because it did not require much experience in working, nor did it require her to be fluent in English. A few months after, Gerry was offered the station manager position at a big airline company called Lufthansa, and combined with Marianne’s, he would make enough money to start renting their own home.

The year 1980 was the most relaxed they’d been since the move. They had settled in and began to feel at home. The cause of this is because of her husband’s start at Lufthansa, and the military’s guaranteed house loan. This comfortableness allowed them to get to know life outside their new home. Adjusting to the way Americans live their lives and the way Americans speak was the hardest part for the Kramer family. Marianne claims, “It takes a lifetime to understand American culture if you were not raised here”. My grandmother’s favorite part about moving to America was the excitement of exploring completely new terrain and getting to know brand new kinds of people. She was not accustomed to any of the ways of an American, but she so badly wanted to learn.

Currently, Marianne lives in Spring, Texas, in a beautiful home with her husband Gerry. She works as a teacher and teaches the languages English, and German. Gerry now transferred to Houston airport station manager for Lufthansa and loves it. Looking back on her life in Germany, Marianne says that if she and her family never left, she would never have reached the level of happiness she reaches every day. Not only this, but her family would not have reached the financial goal, standard of living, or this sense of freedom. Her children would not have received an amazing education, nor the amount of satisfaction acquired growing up in America. Marianne Kramer has no regrets whatsoever in her decision, even to this day. She has never once felt homesick, only happiness in the moment.

This story was written by Maddie Lindsay, the granddaughter of Marianne, who attends Palo Alto High School, in Palo Alto, CA.