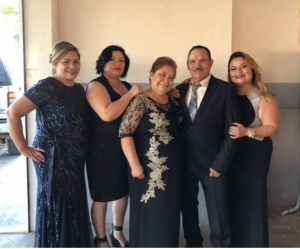 I began by asking what was life in Mexico before coming to the states.

She said “life was okay, I married your grandpa young and when I got married my mother told me I had to go live with him and to not come back” I asked her why she married young and how was life with my grandpa. She said “I didn’t know any better and life was hard in the beginning.”

I then asked who was her support system then if her mother kicked her out. She responded “ I was. your grandpa was there when he needed to be but I went through a lot of hardships alone.”

I asked if that was the reason she decided to leave. She said “ No, I actually never wanted to leave. I loved my home but it was something that had to be done.” I asked why.  She said “your grandpa was losing his carniceria (meat shop) and there was going to be no money coming in.

He was a drunk at the time and he was not able to maintain our family.” I asked how did she leave. She said “my father had a friend who was crossing people through the border, he owed him a favor and she asked if he can cross me.” I then asked her how long did it take for her to arrive. She said “ it took me four days, two of those days were miserable,

I had two small bags that I had to carry, one water jug and that was all. The man who crossed me was crossing four other people and on the first two days he did not take any rest periods.”

I asked what was it liked when she first arrived.

She said “ I didn’t know anyone, I didn’t have a place to stay. I was discriminated a lot, people would not help me. I met a lady whose family was here and she was kind enough to give me a small space to sleep in. My first night I finally showered and slept in a very small mattress.”

My Tita explained to me that her first couple days were kind of the same, she would go out and look for any jobs and try to find somewhere where she can begin to work. “ I felt depressed, all I felt was sadness. I was worried about my daughters and how they were doing. I had no way of contacting them and I didnt trust your grandpa to care after them.”

I asked why and she explained that my grandpa was going through his own things and she knew his alcoholism was worse. I then asked after being inthe states did she regret any of her choices. She said “ no, I did not. It was tough for me to experience years without my daughters but eventually after getting employed and getting settled it became easier for me and my only goal was to bring my daughters here.”

I continued to ask how she became a citizen. She said “ I was a maid for many years to this lady in the 80’s. I didn’t know any english but she would point to what she needed and I would just clean it. I was her maid and cook for years. She was not a nice lady, she treated me very bad. She would purposely dirty things for me to have something to do. I lived with her for all those years, but finally after about six years of working for her she signed a letter of recommendation for me to be able to start the process.” 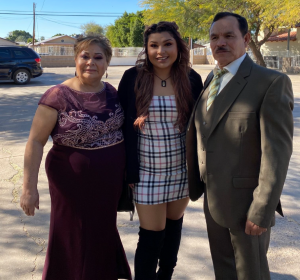 Tania with her grandparents

This interview and write-up of her grandmother (Tita)  were done by Tania Hernandez a college student in the Bay Area.