Life of the Chinese American 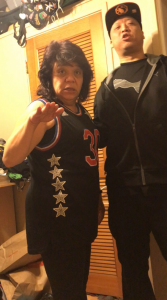 This is a photo of my mother describing how tall the other girls were in Hong Kong compared to her.

Imagine waking up and not hearing alarms or factories working, but instead the voices of kids yelling as they played in the courtyard, the sound of food sizzling while being cooked in a cart by our local vendor in Hong Kong. The savory yet piquant smell of Luobo Gao as it wafted throughout the air and into your living room. This is how I woke up often in the mornings, only to get up and do chores as was my responsibility as the youngest of five siblings. I lived in Hong Kong from since I was born in 1968 until I turned 10 in 1978. For as long as I have know, life in China as always been competitive. My family had been good off for the time that I was in Hong Kong, but it was considerably hard to find jobs in China. Compared to the United States, I would say that finding a job in China was at least twice as hard than finding  job in the Unites States. Although, when still in Hong Kong, my father was the head electric engineer of the New Territories. This was located in now known Kowloon, China. When we had decided to finally immigrate to America, my father had to take up 3 jobs. He was a warehouseman, a security guard, and a delivery man; he would also play music with family during the night. Often I would hear his violin singing blissfully from inside of my room. Overall, it was surprisingly more fun in Hong Kong rather than America.

We had decided to leave for rather simple reasons. We wanted to leave based on two major reasons; the first reason was because it was more possible in the United States for my siblings and I to go to college than in China. This was true while living in China due to it being so heavily competitive. This actually made it very difficult for my older sisters to attend college when in China because they would have needed to be the top of their classes. The other reason that we decided to come to America is because in America it is easier to own property. To own property in China you had to be quite rich or born into a wealthy family, I was not either.

The day that we had finally decided to leave was a day of sadness for many of my siblings as well as myself. This was a huge deal for a lot of people at the time immigrating from China because most of us were not going to return to China. My biggest feeling during that time was a mixture of both drowsiness as well as sadness. I was feeling tired and drowsy because the flight itself was over a day long, coming to a total of 27 hours. The airport felt really sad and depressing for most people; as a child, it was really scary to look at all of the people and just see yourself. By this I mean seeing my reflection; all around were other people wearing dark black sunglasses. These sunglasses were worn by everyone who was immigrating. They were worn to hide the eyes of those who had been crying. I realized this after looking at my brother and sisters as they stood there with tears streaming down their faces. At this moment, I knew for the first time in our lives that our family had been separated and it would be a long amount of time before we would be once again reunited. Thousands of others felt this heart wrenching pain throughout that same dark airport. In actuality, we had not necessarily wanted to initially go to America as our first choice was to go to Australia. The only reason we had chosen America was because we had more family that could support us in America compared to Australia. Although, when we arrived in America, our first stop was in Alaska; we then flew to San Francisco.

When I first arrived in America, I only had three perceptions of America. To me, America seemed exciting, empty, and green. It felt exciting because it was an opportunity to meet lots of new family and experience what all the great talk about America was like. It seemed empty because all of the houses in America seemed small and undercut. This is because in Hong Kong, there were only skyscrapers that reach to the extent of my vision. Whenever I would go to the top of any of these skyscrapers in China and looked out the windows, all I would see is a sea of clouds that filled the skies. It was green because unlike in Hong Kong, there was grass everywhere. In Hong Kong, there were no lawns, but in America everyone has a lawn with a white picket fence. It took a while for me to get used to the smell of fresh cut grass so often in mornings while in America. We were surprised to see that there were even trees and grass on the freeways. These were all new to my family and had taken us by surprise.

Now, I live in a house in Hayward, California with my husband and youngest son. My oldest son has already gone off to college. As of now, I am doing amazing and have three main dreams. My first dream is for one of my sons to bring home a girl in the near future. Secondly, I want to have one or both of my sons to provide me with grandchildren in the next 10 years. Lastly, I want my husband and I to be able to retire while being able to continue with the same lifestyle that we are living now without the support of our children until they come to the age where they will be able to support us in old age. To this day I have not gone back to Hong Kong, so I would like to visit.

This story was written by Justin Ho, son of Paula Bernardo. A student in Hayward.