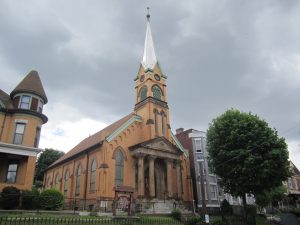 My Grandma was a spoiled brat. When she graduated high school she demanded her father to buy her a fur coat. Lester Torok, my great grandfather- who I unfortunately never had the honor to meet- immigrated from Hungary when he was a young boy. He came with his mother and two siblings. My grandma told me his story to the best of her knowledge.

In Hungary Lester lived on a farm with his Father, Mother sister and brother. The quality of life was not great, especially compared to the United States. They lived on the border of Hungary and Romania. Since he was so young, he did not remember much about his life in Hungary.

Lester’s mother had a pension from Hungary to live in the US. The Torok family does not know what it was for, but that was why Lester’s mother originally chose to leave. His father stayed home in order to take care of the farm. Unlike the rest of the family, Lester’s father loved Hungary. But his wife (Lester’s mom) was ready to leave.

They took a boat from Hungary and landed in Ellis Island. Once they got to New York, they went directly to Perth Amboy, New Jersey.

Soon after, Lester’s brother convinced their mom to take them back to Hungary. His brother hated America. He thought everything was 300% better in Hungary. Once they were back in Hungary he ended up taking over the family farm. The three of them went back to America soon after they had gotten back to Hungary. They went back to Perth Amboy and Lester and his sister went back to school. He went all the way to eighth grade, but did not proceed to high school. Perth Amboy was an immigrant town, mostly Hungarians (Perth Amboy is an immigrant town to this day). This created a sense of comfort when they came. Although moving was a big change, it was helpful to be surrounded by people experiencing the same things. Lester was surprised at how much he loved America, he was “extremely happy” to have moved back, according to my grandma.

Lester struggled to find a job. Being an immigrant and only passing eighth grade did not work in his favor. Eventually he was hired as a salesman. This was his first source of income. He sold insurance with a Fidelity insurance company (Modern Woodmen of America), walking around doing cold calls. This was not what he wanted to do and he was hired by the city government for a position called “overseer of the poor”.  Before I explain the job, you need to know what type of person my great grandfather was: extremely affectionate, very social, likeable, and respected all around town. His work life was basically to attend the city court and help those who were poor and had been accused of something, or just needed help with something in court. He was there for the first entry level of a legal process. One example of something he would do very often is have to find a place for someone who had become homeless during this first level of a legal process. He was very good at his job. Eventually he bought an apartment complex that consisted of twenty appartements. There was no hot water, but he had every room filled because of the need for housing. This was his third source of income throughout his life.

Lester met his wife in America, and my Grandma says they were “always extremely in love”. They were both immigrants, but his wife was from Romania, right over the border of where he lived. They had three children together. Lester was able to provide more than anyone would ever expect from an immigrant who did not even go to high school. My grandma says she had “a beautiful family life”.

Two events stuck out to me when hearing his story, the first being they had a summer home on the coast. Lester bought a piece of land, with nothing on it, and built a beach house from scratch. His family was able to spend their summer on a beach, in a house built by him. The house still stands today. The second thing about Lester that really shows his intelligence was working with the insurance company. He bought his daughter (my grandma) life insurance. She gets a monthly check from them to this day because of his loving and caring personality.

He once told my Grandmother that he wanted his children, grandchildren and even great grandchildren to have a great life. Being the great grandchild, I can say that I am living an awesome life, and I truly wish I had been able to met him, especially now that I know more about his story. Unfortunately, my great grandfather had horrible dementia towards the end of his life. I can say confidently that he had a wonderful life, was an amazing man and is an outstanding example of the American Dream. Moving to America does take sacrifice. Lester never got to see his father or brother again. But what he gained, the American Dream, is something life-changing for both him, his family and their families.

The story of Lester Torok was written by his great granddaughter Abigail Ramsey, a student at Palo Alto High School.