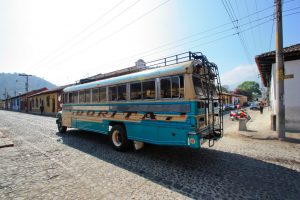 photo of Guatemala bus – by Semio

On her second day of being in the United States she found a job packaging lettuce, and although it was a difficult task to do, she earned nearly 16 times what she would’ve earned in El Salvador in a week.

My mother, Ana  was born in La Libertad, El Salvador – just a few miles away from the capital, San Salvador. She quickly learned to become independent and even began working by the age of 9, picking cotton at a local farm. However, the work doesn’t take away from what she says was a wonderful childhood filled with games like hide and go seek and playing tag with her neighbors, which she says was always fun and exhausting.  Born in a poor family, and the oldest of 6 children, she always had something to do around the house whether it was taking care of her siblings or even cooking by the age of 6. Once she finished high school, she was focused on working and helping out the family. Although she lived through the entire civil war, she never witnessed anything traumatic occurring in her neighborhood. However, the after-effects of the war were one of the main factors that prompted her to immigrate and change her life forever. As a 27 year old, her primary goal was to come here, work, and to help support her family financially, and she had finally figured that not much could be done in her home country, so it was best to immigrate.

The poor, dusty town of La Libertad had given nothing to her but misery and pain. Shortly after the civil war had ended, local gangs began to form. This resulted in an even worse post-war situation than what the war had originally caused. Tens of thousands of people – murdered. Close friends and church members, innocently killed. This, along with the lack of financial resources led her to make a drastic decision, and immigrate. She wanted to escape the warzone of her country and come to a land of opportunities where she would start fresh and send money back to her home country in order to aid those family members left behind.  But it wasn’t going to be that easy. In front of her lay over 2,500 miles of a dangerous journey filled with dangers varying from bandits to deadly animals such as coyotes and rattlesnakes. The childhood memories that were once filled with laughter and joy were now submerged with fear and bloodshed. Everything that she had ever known was left behind, and the journey to a new world had begun.

On a hot Friday afternoon in March 2004, she left her hometown. She was driven by car until the border with Guatemala, where she had to get off and get on a raft to cross the river that divides the two countries. Once in Guatemala, she took an intricate bus route all the way up to the border with Mexico, and the most difficult part of the journey now began. In order to get into Mexico, she had to stay hidden under the bus seat so that if the bus was pulled over, she could not be seen by the Mexican immigration officers. Cramped up, dehydrated and scared under the seat – she wondered if this new country was really worth it. Then she remembered all the violence, poverty and corruption she had experienced back home and realized that there couldn’t be anything worse than the conditions in which she had once lived. This, along with the determination of wanting something better for her family pushed her to reach the next stage of the voyage.

Then she would had to walk for days through the Mexican desert. Along with her were several others in search of “The American Dream”, and she recalls that some weren’t able to make it. Along with having to walk dozens of hours at a time under the scorching heat, she had to be careful and watch out for animals that were always on the search for food. However, what worried her the most was the idea of getting caught and getting sent back to El Salvador. After 3 days of walking through the desert came a point where she believed that she could no longer make it. A man named Hugo (who later became her husband), helped her out and carried her through the last part of the walk. At last, the border was in sight, and the only thing standing between my mom and the U.S was a canal. Although only a few feet deep, the current dragged her downstream and she thought it was all over. Miraculously, she held onto a rock at the bottom of the canal and floated to the top. On the other side of the canal was my aunt who took her and my stepdad into a small town in Arizona named Eloy. She realized that as her hopes of the American Dream grew, the faith in seeing her family once again diminished.

My mother quickly adapted to the life in what appeared to be a new world for her. The only thing she struggled with was the language, but this wasn’t going to be a barrier for her. On her second day of being in the United States she found a job packaging lettuce, and although it was a difficult task to do, she earned nearly 16 times what she would’ve earned in El Salvador in a week. My mother says she is very fortunate to have been in the hands of my aunt when she first arrived here because she helped her out financially for the first few days while she adapted to life in America.

Perhaps the most difficult thing about being here for my mom is being an immigrant itself because she noticed that she was often refused certain jobs because of that. Also, the fact that she wasn’t even considered a human just because she had no papers bothered her, but it was worth it. The freedom, security and opportunities are all worth it for her. At last, she was able to send money back to help out her family who still lived in poverty and surrounded by violence. As the years went by, my mother got accustomed to the fact that it was going to be a while before she saw her family again.

My mother is currently in the process of obtaining her desired papers, which will immediately enable her to go to her hometown and reunite with her family, even if it is just for a few days. After 12 years of being here, my mom says she is fully adapted to the faster lifestyle. Although she would like to go to El Salvador to see her family, she would not like to return there as a permanent home because that place has scarred her with irreversible wounds. Besides the family, the only thing my mother misses about her country is the variety of exotic fruits and the dense forests in which she once ran through playing games with her friends. Despite being considered ‘illegal’, my mother appreciates that this country opened the doors for her and gave her an opportunity to show that she is not a criminal, she is just another human, trying to survive and obtain the best things possible for her beloved family.

This story of Ana was written after an interview by her son Roberto Nunez, a student at Eastside College Prep, in East Palo Alto, CA.