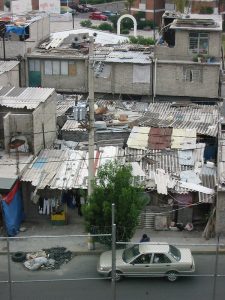 Brian Martinez (name has been changed) lived in Mexico City; it was a busy city – no place for a child to grow up.

There were no backyards, no playgrounds. Crime was recurrent; it was dangerous for anyone, but especially unsafe for children. School was overcrowded and underfunded. With metal walls, it was like walking into ashed- stuffy and hot. For the young children, those of about five years, milk, bread, and a banana
were provided. However, for anyone older, there was nothing to eat, not even a lunch period. Adults sold chicharones after school, but that was all. When he had the money, this was Brian’s favorite snack. They did not really have PE either. There was very little room to play, so PE was simply reading books on sports, but without actually playing them.

After school, Brian would go home just to be sent to the market to pick up tortillas, everyday. It was a quick walk, about three blocks. He would eat, and then do homework, and everyone would go outside. Usually, your classmates were your neighbors, so it was just playing with friends. Everyone would be outside until the sun was gone and the moon was high, then the day would begin again.

When his father passed away, his mother was left alone to raise Brian and his sister. Working at a toy company, she could not provide for everyone. His mother decided to move to Texas. She traveled alone and illegally, and established herself for two years. During these years, Brian lived with his grandmother, and twelve other family members. The house was tiny, and there was no privacy. Despite this, he was happy because his family was together.

Despite his contentedness, this situation was not a permanent one. He and his sister wanted, and needed, their mother. As a family, they made the decision to emigrate from Mexico, to the US.

He had gone into his departure with the idea that it would be a nice plane ride of a couple hours at most. Beginning with a terrible thirty six hour bus ride, Brian’s migration was nothing like he imagined. They arrived at Tijuana City and met the man who would take them to the US at a hotel. The hotel was terrible. There were lots of drunk people, as well as lots of people fighting or crying. A truck picked him and his sister up, and they arrived in a field with a lot of
bushes, and about twenty-five others. His mother had a green card, but she did not want him and his sister to travel alone. She risked everything to come back and help her children cross. She could have lost everything. His family waited until midnight.

They told them to run to a hill, so that is what was done. His mother was not in shape, but his sister was. Brian remembers waiting behind with his mother, as well as having to catch up with his sister to tell her she needed to slow down, because if she got too far ahead, they would never see her again. All of their money was in his sock, and it kept falling out, granting another thing to be worried about.

There were patrolmen in cars and helicopters, so everyone had to hide. The man in charge gave them a signal to run. They ran and ran and kept running. They sprinted until they could not run any longer.  Then they would catch their breath, and sprint again. It was stop and go for at least six hours. The sun was coming up when they were hiding in a trailer park in San Diego. Brian and everyone else waited there until a truck came and picked them up.

The truck was going too fast.  He recalls seeing all of the street signs flying so fast they are unreadable. After this, they ran across the freeway and waited for another truck, before his grandfather, who lived in Stockton, was able to pick them up. Brian was overwhelmed with joy and excitement that the journey was over; however, the man in charge wanted to keep one of the members of Brian’s family because they were short on money. His grandfather talked to the man, and they gave everything they had, and the man let them all go.

It was about a ten hour ride, and Brian slept the whole way. Once they arrived at his grandpa’s house in Stockton, they showered, ate, then went
back to sleep. When he arrived in the US, the most notable difference was the cleanliness. Everything was so much cleaner than where he had grown up. Brian felt as though he was living in luxury. They had their own room, and televisions. Even clothes that were deemed cheap in the US were greater quality. It was a day and night comparison.

School was a bit different as well. There was immediate improvement because in the US, students received lunch. Of course, there was the language barrier, and learning was a lot more complex because of it. It was very frustrating; wanting to learn, but not understanding. After a couple of years, migrant programs were increasing in popularity, and Brian got the opportunity to join one. Within the program, teachers spoke both Spanish and English, which made learning a
lot easier.

Although the learning was more accessible, the students were not as accepting. The school Brian attended was mostly white, and he faced a lot of discrimination for being a person of color. Students would bully immigrants, and continually attempt to start fights. For a while, the bullying was really bad, but it got better.

The process of getting citizenship took roughly seven years. Apart from the family he has built, Brian’s most notable accomplishment is his current job. He has held his position as an inventory supervisor for twenty-two years. Even though the journey was incredibly difficult, it was well worth it.

The interview was conducted and the narrative written by Amori Alcala.  Names have been changed to ensure anonymity.